by Daniel Oberhaus: The static fire is one of the last major tests before the maiden flight of the Falcon Heavy, the most powerful rocket since the Apollo era… 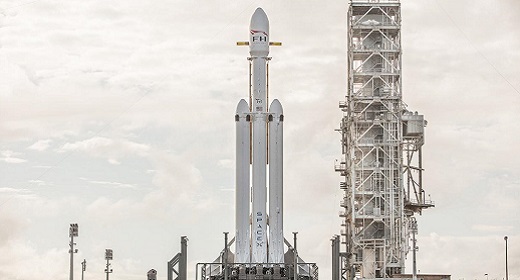 Update: The Falcon Heavy test fire has been postponed until Saturday after the ULA Atlas V launch was scrubbed Thursday evening due to technical issues. The Atlas V will attempt a relaunch Friday night. A six-hour window for the SpaceX static fire will open at 2:45 ET on Saturday afternoon.

On Friday afternoon, SpaceX is scheduled to complete the first static fire of its Falcon Heavy, which the company hopes will one day carry astronauts to Mars. A static fire involves testing the rocket’s engines at full thrust for a few seconds while the rocket is held in place on the launch mount.

The company had originally planned to do the static fire last Thursday, but aborted the test after complications related to the launch mount. The static fire has since been scrubbed two additional times, but delays are par the course for the Falcon Heavy. The rocket launch was originally planned for “late 2013 or 2014,” before eventually getting pushed to 2017, and now reportedly the beginning of 2018.

The static fire is one of the last major tests prior to the maiden launch of the Falcon Heavy, which is expected to occur sometime within the next two weeks. Motherboard will be on site to cover the launch.

The Falcon Heavy is essentially the equivalent of three smaller Falcon 9 rocket boosters strapped together. With five million pounds of thrust at liftoff, it is twice as powerful as the next largest rocket in existence, the United Launch Alliance’s (a joint venture between Boeing and Lockheed Martin) Delta IV Heavy. According to SpaceX, the Falcon Heavy’s 27 Merlin engines pump out thrust that’s roughly equivalent to 18 Boeing 747 planes with their engines at full throttle.

The rocket’s first planned payload isn’t astronauts, but SpaceX CEO Elon Musk’s personal Tesla Roadster, which is destined to be placed in orbit around Mars. According to Musk, the Roadster will be playing David Bowie’s “Space Oddity” on repeat during the flight and the car “will be in deep space for a billion years or so if it doesn’t blow up on ascent.”

The last time a rocket even close to being this powerful lifted off from Kennedy Space Center’s launch pad 39A, it was NASA’s Saturn V rocket that was used to send astronauts to the moon on 10 different occasions.

Although the Falcon Heavy will initially be used to ferry large commercial payloads into Earth orbit, Musk hopes it will also bring astronauts to the Red Planet as early as 2024—but given Musk’s tendency to over promise on delivery dates, I wouldn’t hold your breath.