A Glimpse Into The Life of Daya Mata

Daya Mata is a devotee of God and a monastic, whose life is wholly given to serving God and humanity through her Guru’s teachings. 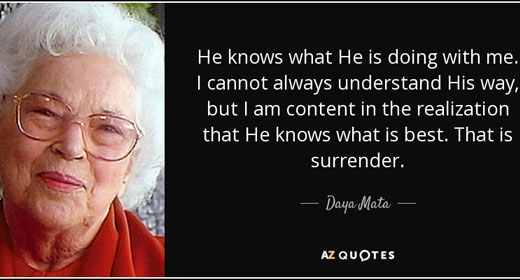 Through the years, her daily life has followed the spiritual routine established by Paramahansa Yogananda for all the monastic disciples: regular daily meditation, service, recreational exercise and spiritual study. People often ask her how she lives a balanced life, given her enormous responsibilities. Invariably her reply is: “I am able to carry on all these duties not in spite of our spiritual routine, but because of it. That is where my strength, inspiration, and guidance come from meditation in the morning, noon, and evening; and keeping my mind constantly focused on God in between meditations, as Paramahansaji taught us.” And she always reminds us that if she is able to do this, so are we and thus reap the benefits of our spiritual efforts while living our active lives, finding joy and fulfillment even in the midst of a demanding schedule.

As was Guruji’s custom, her day begins and ends with meditation in the morning in her private quarters and in the evening in our Guru’s shrine. Here she deeply prays for the healing and well-being of those who have requested spiritual help through Self-Realization Fellowship, and for world peace. Before assuming her daily duties, she reads and reflects upon a thought from Paramahansaji’s writings, carrying into her day some spiritual principle to put into practice. In such simple, practical ways, she has made the truths he taught the motivating force in her life.

Though it has been nearly seventy years since she first dedicated her life to God in Paramahansaji’s ashrams, her schedule continues to include many hours of active service for her Guru’s work. She has always preferred the word “service” to “work,” and her life is a testimony to Paramahansaji’s statement that love is the greatest stimulant to the will. Daya Mataji works directly with a number of monks and nuns who serve as her assistants and secretaries, who can attest to her keen concentration and tremendous ability to accomplish whatever needs to be done. She has been known to give dictation to more than one assistant on different topics, in between handling telephone calls on completely separate subjects while waiting for her secretaries to catch up!

With compassion and attention to each person’s need, she reads the many letters she receives from Self-Realization Fellowship members and friends, and prays deeply for God’s blessings upon their lives. In addition, she meets regularly with the monks and nuns who are responsible for different areas of the SRF work, including the monastics who guide and oversee the spiritual and practical aspects of our ashram communities.

When asked, “What are the principles that guide your decisions in carrying on the SRF work?” Daya Mata has told us: “Basically there is one principle: the desire for attunement with Master. First and foremost I am a disciple of my guru. My desire in all I do is to uphold the principles he taught, rather than to impose my own wishes. When I am asked my opinion about something, I never respond without first reviewing in my consciousness, What would Guruji say if he were here?’ Then I endeavor to give the answer that I think he would give, or that he definitely did give and I recorded among the many notes I took over those twenty year I was blessed to be with him.”

In addition to the vast number of organizational responsibilities she handles in connection with Master’s growing worldwide work, Sri Daya Mata spends a significant amount of time working on the many vital projects entrusted to her by Paramahansaji and the Board of Directors, including transcribing the thousands of pages of shorthand notes she had taken during his lectures, classes, and informal talks for more than 20 years. Just as the Guru himself spent the latter years of his life in semi-seclusion at Encinitas and later at an SRF ashram in the Mojave Desert, beginning in the late 1960’s Daya Mataji was encouraged to make use of a property SRF had acquired, to enable her to have periods of uninterrupted seclusion in which to concentrate exclusively on those essential projects. (Two years ago SRF purchased a second residential building adjacent to it, as there was a need to house nuns who could assist Daya Mata with her projects and other work.) The Mother Center at Mt. Washington has always been “home” to her, from the time that she first entered the ashram as a young girl (except for a period she spent in Encinitas during 1937 to 1948 when Paramahansaji was there working on his Autobiography and The Second Coming of Christ), and Mt. Washington remains her primary residence to this day.

The many projects she is presently working on include:

— Compiling the guidance Paramahansa Yogananda gave her regarding the future development of his work.

— Working with Mrinalini Mata, the SRF editor-in-chief, in preparing for publication Paramahansaji’s voluminous (and eagerly awaited!) commentaries on the New Testament, as well as his collected talks, essays, poems, and inspirational prose writings.

— Writing her detailed memoirs of the twenty years she was blessed to be with the great guru.

She considers no aspect of her service more important than her participation in the SRF Prayer Council, deeply meditating and sending healing blessings to all who have requested help. And in addition to her individual correspondence with devotees who write to her for spiritual guidance, she keeps in touch with all members of Self-Realization Fellowship through her seasonal letters of spiritual guidance and inspiration, as well as through her articles in each issue of Self-Realization magazine. Though she herself does not use a computer or access the Internet, she tells us she is looking forward to contributing regularly to the communications on this web site, as a further link with the worldwide spiritual family she lives to serve.

As the sanghamata or spiritual “mother” of our Guru”s society, she has many spiritual duties, as well as her organizational responsibilities. The following is a brief overview of some of these activities over the past year:

Daya Mataji greeted and gave an informal talk to those attending our annual Convocation late in July. Her Convocation talk, which offered hope and inspiration for the approaching millennium, was received by the more than 4,500 participants from around the world.

The monastics always eagerly anticipate those occasions when she is able to meet with the monks and nuns for informal satsanga and chanting, sharing informally stories of the years she was privileged to spend with Paramahansaji. At Christmas time the monastics are looking forward, as usual, to our All-Day Christmas Meditation on December 23, led by Daya Mata and Mrinalini Mata. The Christmas Meditation is one of the spiritual highlights of the year, as all of you who attend the Christmas meditations in our temples and centers can attest to! After the spiritual celebration of Christmas through the all-day meditation, Mataji joins the monks and nuns for a joyous sharing of divine friendship at a banquet held at the Mother Center on Christmas Day. The auspicious holiday season extends through the new year, culminating on January 5 when Daya Mataji traditionally leads a special commemoration service for the SRF monastics to honor the birthday anniversary of our Guru.

During her younger years, Daya Mataji herself traveled much throughout the world in order to spread Gurudeva”s teachings. In more recent years she has not been able to visit distant countries or cities, but working with the Board of Directors, she continues to oversee all vital decisions and matters involved in guiding Guruji’s worldwide mission according to his ideals. Through her prayers and correspondence, she maintains a loving concern for each devotee who is following this path, fulfilling the words Gurudeva once wrote to her, ‘inspire all with your spiritual motherliness.’

Ever since Paramahansaji’s birth centennial in 1993, we have seen a tremendous growth in both awareness of and interest in his teachings. This has resulted in a corresponding growth in the SRF work, which many of you are noticing. In closing for now, Daya Mataji would like to leave you with these thoughts regarding this new phase in our ongoing development:

“We must always remember the point behind our service, behind our entire lives the reason we came on this path and follow our Guru: to find God. When we put that first, we will find the blessing in every experience, every challenge.”

“The true strength of Self-Realization Fellowship, its ability to grow and adapt and serve in the new millennium, lies in the effort of each of us to live in the spirit of Guruji. And of course, for me that means one thing, the immortal words he spoke to me just before his passing:

‘When I am gone, only love can take my place. Be so drunk with the love of God night and day that you won’t know anything but God; and give that love to all.’