CBD and THC are the two most prominent, most studied cannabinoids produced by the Cannabis Sativa L. plant… 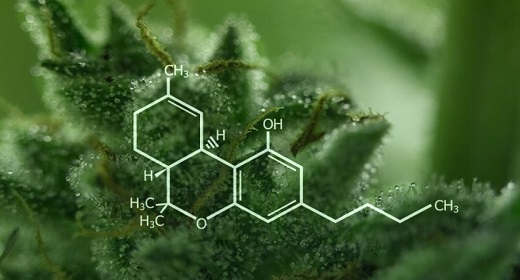 a species of the hemp genus of plants. Both compounds are found mostly in the resinous trichomes of the cannabis plant’s flowers, leaves, and stalks (to some degree), with the flowers having the densest distribution of trichomes. There are now many strains of cannabis, and the plant has been manipulated and cultivated over many years for different end uses. Some industrial hemp has fewer flowers, and grows taller and leaner; on the other side of the spectrum, cannabis that is grown for recreational use can be a more squat, shorter plant with a much higher flower yield. The semantics can make things a bit confusing, but strains of cannabis that are grown for higher THC content are what we generally refer to as “marijuana,” while other strains of hemp/cannabis can be cultivated to maximize CBD content, and these are generally referred to as “hemp.” For more on this distinction, check out BASICS.

By definition, industrial hemp plants contain 0.3% or less THC, and are said to be more CBD-dominant. These hemp varieties can be bred to increase CBD content while keeping THC low, which keeps such cultivars from being classed as a Schedule 1 controlled substance. Consuming high-CBD/low-THC cannabis is for all intents and purposes legal throughout the United States. By contrast, even the least potent strains of marijuana (or high-THC cannabis) contain 10 times more than the legally acceptable amount of THC, around 3%. Different sources offer different percentages, but on average, THC content in a lot of marijuana today nears around 20%, with some strains pushing higher. Consuming high-THC cannabis is illegal under the U.S. Controlled Substances Act, though many states have changed their laws in recent years, and this legislation is increasingly being challenged, in part due to emerging evidence of THC’s medical value in treating a variety of illnesses.

CBD and THC both have the molecular formula C21H30O2, and the same molecular weight of 314.4 grams per molecule. The two compounds are structural isomers, meaning that they share the same basic chemical makeup, but differ in atomic structure—both are “cyclic” compounds, meaning that one or more series of atoms in their makeup are connected to form a “ring.” CBD has an open ring, while THC has a closed one. This slight variation in atomic structure is what accounts for how each compound interacts with the endocannabinoid system (ECS) and why they affect the ECS’s CB1 and CB2 receptors differently.

The THC molecule can bind directly to the CB1 and CB2 receptors, and has a higher affinity for CB1. THC works with these receptors in a kind of lock-and-key fashion, and when they bind, it activates the CB1 receptors. For this reason, THC is called a CB1 receptor agonist. THC mimics the endocannabinoid anandamide, which also binds to CB1 receptors. Anandamide was given its name after the Sanskrit “ananda,” meaning “bliss,” and is often called the bliss molecule. Anandamide CB1 activation increases appetite and enhances pleasure, and is likely responsible for some of the euphoric effects of exercise. It also plays a role in many other physiological functions, notably pain response. THC’s similarity to anandamide and its ability to bind with CB1 receptors is what creates the euphoric high associated with smoking marijuana.

By contrast, CBD does not bind directly with the ECS receptors or activate/suppress them. In fact it acts to suppress CB1-activating qualities of other cannabinoid agonists (like THC), and for this reason is labeled an antagonist of CB1 agonists. In simple terms, this means that CBD mutes the influence of a cannabinoid like THC. When THC and CBD are consumed together, CBD can have a modulating effect and reduce the euphoria and so-called psychoactivity that is generally associated with marijuana. CBD also interacts with other noncannabinoid receptors in the body, and can influence other physiological systems that THC cannot (and in some cases vice versa). CBD interacts with the 5-HT1A receptors, the”vanilloid” TRPV1 receptors, and others, all of which are part of various important neurohormonal activities. For more on this, read How CBD Works.

Because THC is responsible for the high associated with marijuana use, and CBD is not, they are sometimes labeled as diametrically opposite “good” and “bad” cannabinoids. This is not quite accurate. Yes, THC is psychoactive, and is known to have unwanted side effects like anxiety, schizophrenia, psychotic thoughts, confusion, and the like. But THC is not all bad—it also has powerful therapeutic effects, and to stigmatize it because of its recreational use does not acknowledge its benefits. CBD is said to be nonpsychoactive, but a better term is “noneuphoric,” as CBD does have clear effects on mood and thinking, and possibly even memory. As discussed above, CBD does not work the same way that THC does and does not produce a high—it in fact counteracts the high that comes with THC (which can be of benefit in cases where THC could be of therapeutic value but patients need to minimize side effects). CBD has few if any side effects and many benefits when used therapeutically across a wide range of health concerns, and is considered legal for purchase and consumption on its own or in compounds with 0.3% THC or less. This makes it an attractive alternative course of treatment for many ailments. Some states have passed “CBD-only” laws to delineate between “safe” CBD for patients who need it and “harmful” THC, the often demonized Schedule 1 substance. But the real truth of the matter is that sometimes these compounds complement each other as well—it depends on the conditions they are used for. Raphael Mechoulam, the most commonly acknowledged father of cannabis science, and many others after him, have spoken of the “entourage effect”—the idea that cannabinoid compounds, along with terpenes, flavonoids, and other elements of the cannabis plant, might work better as a whole than if they are isolated.

CBD and THC are similar but distinct compounds, two among many phytocannabinoids. Cannabis legislation and the stigmatization of marijuana have led them to be pitted against each other as opposites and categorized by extreme language, but the reality is a bit more complex. That being said, THC is still technically illegal, though many states have passed laws opening it up for medical and recreational use, and it still comes with some undesirable side effects. On the other hand, CBD on its own or consumed in preparations with 0.3% THC or less is technically legal and has virtually no adverse effects. CBD has been promoted in the treatment of a wide range of diseases, and research continues to yield positive findings.