by Carl Rogers: As part of my studies for my master’s degree in counseling, I recently read Carl Rogers’ Becoming Partners: Marriage and Its Alternatives. 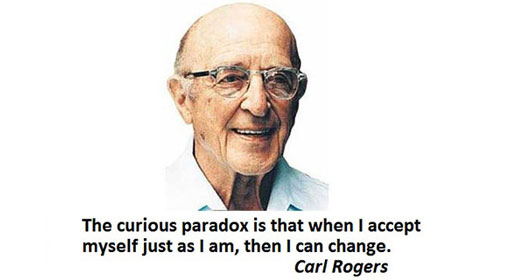 At the time this book was published (1972), the term polyamory had not yet been coined, but if it had been, I suspect Rogers would have talked about it.
I find his approach refreshing because he is open to nontraditional ideas and explores people’s feelings about their experiences. His insights can be useful both to monogamous and polyamorous people since they have to do with creating relationships that are satisfying and fulfilling to the individuals involved. He explicitly recognizes that this may look different to different people.

As background, Becoming Partners was published at a time when there was some discussion in the media about non-standard relationships. Some other books dealing with nonmonogamy published in that era include The Civilized Couple’s Guide to Extramarital Adventures by another eminent psychologist, Dr. Albert Ellis (1972), Open Marriage by Nena and George O’Neill (1972), Hot and Cool Sex: Cultures in Conflict by Anna K. and Robert T. Francoeur (1974), The Extramarital Sex Contract by Dr. Jay Ziskin and Dr. Mae Ziskin (1973), The New Intimacy by Ronald Mazur (1973), and two slightly earlier books which inspired many in the early generation of polyamorists: The Harrad Experiment by Robert H. Rimmer (1966) and Stranger in a Strange Land by Robert A. Heinlein (1961). Becoming Partners is not currently in print, but has been available second hand through amazon.com.

In his introduction, Rogers explains that he wanted to offer young people something to help them “in some of their pioneering struggle to build new kinds of marriages and alternatives to marriage. Not a stupid book of advice, certainly, but perhaps something that is new.” So he decided to try to show marriage from the inside, to provide a picture of the struggles, good times, perplexity, jealousy, and despair which go into a partnership. He interviewed people both about relationships which didn’t work as well as ones which were working. He also includes some comments on communes and interviews with people in them. When he talked with people who had extramarital relationships, he focussed on what did or did not work, without any assumptions or judgements on that type of relationship per se.

Here are some of the things that struck me in his comments on interviews, or that a person interviewed mentioned:

At the end, Rogers sums up his observations about the common elements of satisfying, enriching, growthful, possibly permanent relationships.

I find all of these points to be very relevant to those of us who are stepping outside normal social constraints, who are willing to love more than one partner and create the types of relationships that work for us. One expression of Rogers’ vision of partnership that seems especially relevant to the polyamorous community is his statement on “perhaps”:

“Perhaps I can discover and come close to more of what I really am deep inside – feeling sometimes angry or terrified, sometimes loving and caring, occasionally beautiful and strong or wild and awful – without hiding these feelings from myself. Perhaps I can come to prize myself as the richly varied person I am. Perhaps I can openly be more of this person. If so, I can live by my own experienced values, even though I am aware of all of society’s codes. Then I can let myself be all this complexity of feelings and meanings and values with my partner – be free enough to give of love and anger and tenderness as they exist in me. Possibly then I can be a real member of a partnership, because I am on the road to being a real person. And I am hopeful that I can encourage my partner to follow his or her own road to a unique personhood, which I would love to share.”

In his final chapter, Rogers talks about experimentation as central to our technological advances, and suggests that we should also support the experimentation that is going on with respect to new ways of relating, new kinds of partnerships, rather than condemning them. He suggests a law that declares “that any partnership pattern entered into by mutually consenting adults is now legal, providing it does no clear injury to other persons.” This would allow these explorations to occur openly and honestly. He further suggests that one goal of education be “to assist the young person to live as a person with other persons.” We need to learn how to be partners, how to communicate, resolve conflict, what to do with anger and other negative feelings. The education system has neglected these things. Unfortunately, 30 years later, this is still true.

I find it encouraging that a well known and well respected psychologist presented views that are helpful to and supportive of the types of explorations that we in the polyamory movement are engaged in. I note, however, that this particular book is out of print while many of Rogers’ other works are still in print. We’re still fighting an uphill battle to allow and encourage people to look for the ways of relating that work best for them.