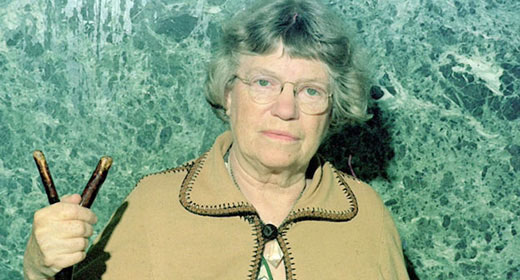 Americans are marrying younger now, often starting families before they finish school. What is the effect on the children, on parents and grandparents? Is the  modern husband too tied down to household chores to make the best of himself? And how about working mothers?

In this exclusive interview a prominent expert on the family, Dr. Margaret Mead, discusses the changed patten of American home life.

Q  Dr. Mead, what is happening to family life in America?

A  No society that has survived has ever been quite like ours today. Ours is made up largely of isolated families. The children are totally dependent on their fathers and mothers, with no other relatives to fall back on, or neighbors, or anybody. Yet we are coming to think that the only form of possible life is this kind of “nuclear” family. That could be dangerous.

A  It is father and mother and several young children—just what you can pack in a station wagon. No children past their middle teens—any others are expected to be away in college, or working. They should, in the popular conception, be out of the house.

Q  Is this a true picture of today’s family?

A  This is the popular notion of what the American family should be like. It is what we see in advertisements, what we see on television. So, when people say, “We’ve got a small family,” or, “We’ve got a big family,” they are comparing their family with this image.

And when they say, “We’ve got an unusual family,” they mean “Grandmother lives with us,” or something of that sort.

Q  What do you think this type of family life is doing to people?

A  To begin with, we are forcing everybody to get married. Not only is this the picture of the family everybody is supposed to have sometime, but it’s getting to be the family that everybody is supposed to have very early. So the girls are very uncomfortable if they’re not married very young. And the boys are beginning to be uncomfortable if they’re not married quite young—the average age of marriage for boys has sunk from 27 to 23, for example.

Q  Anything wrong with that?

A  Well, nobody is going to be interested in doing anything except having children. And you can’t run a society if everybody’s main interest in life is domestic—if nobody wants to be a Senator or a Governor or a President; if nobody wants to be the inventor, the lonely thinker. The average American man today is more interested in being a father than he is in his career or his job.

A  Most of our young professional people these days have several children before they ever get their final degree.

Q  Is that necessarily harmful?

Q  Well, do you think that is the trend nowadays?

A  The American father today is so busy being a father he hasn’t time to do his own work.

Q  What about mothers?

A  Today’s American mother is one of the hardest-worked women in history.

Q  If family housekeeping has become such hard work, how can so many women take jobs outside the home?

A  I think that the first thing we want to realize is that most working mothers are working because they have to keep up with the standard of living we’ve set up today.

As a result, we’re forcing husbands into “moonlighting”—holding two jobs. And we’re forcing wives into “sunlighting”—that’s a word I made up and I like it—which is having an extra job in the daytime.

Q  With mothers away during the day, and fathers holding two jobs, who takes care of the children—the school?

A  The danger to society from the “sunlighting” mother comes when the children are small, before they got to school, if she doesn’t have time to give them adequate care.

By the time the children are 3 or 4, programs on TV and radio intrude into the home. The outer world takes over.

Moral training used to come from the parents. Now it comes in the standards that are being spread—and they’re not very high, either—directly to the children by TV and radio. It’s very hard for the parents to mediate between their children and these standards.

A  I mean, for instance, what happened back in the days when people read aloud to youngsters. You read “Bluebeard” to a child and the child began to cry, “Is Daddy going to hang Mommy up in a closet?” At this point, you said, “This is just a fairy story. It did not really happen.”

Q  Do you recommend that parents ought to be standing over the TV set when there are young people around?

A  We’ve got thousands and thousands of parents in their late teens in this country—young people who aren’t old enough or mature enough to direct their own reading or television viewing.

Q  Can’t grandparents do it?

Q  Isn’t this a change? What’s caused it?

A  It’s partly because of the size of the house, of people living in city apartments with no room for grandparents. Also, improved Social Security benefits mean that some grandparents can afford to live alone better.

And another thing: Twenty or so years ago young people married when they were older. Often they married people their parents had never met. Often the two sets of parents didn’t like each other and so the safest thing to do was to move away from both sets of parents, so you didn’t get involved in their disapproval. Besides, grandparents were supposed to be old-fashioned.

In the last 15 years grandparents have become popular again—but always provided they don’t live in the house.

Q  Why the regained popularity, then?

A  Children are marrying so young, they’re going steady so early, that the two sets of parents are almost bound to know each other, almost forced to like—or at least accept—each other. Often they are forced to combine to support their married children, and the grandchildren that come along.

Also we have that wonderful invention, the sitter. That’s a wonderful thing to do with your mother-in-law. You see, when she comes in, you can go out.

Q  Doesn’t this mean we might get back to the three-generation family—children, parents and grandparents living under the same roof?

A  No. There is, I think, a continuing trend away from it, especially in these “ghettos” that are being built for older people.

A  They are special preserves where only older people may live. In some, no one under 50 is allowed—like a maternity ward in reverse. As someone said of these places recently, “They’re programed for death.”

Instead of having the older people near the growing children and being part of the community, they’re putting them away in these boxes.

Q  Could grandparents really contribute to a family?

A  I think older people know much more about change than young people. What children have to learn is how to live in a changing world.

These children that are born now think the world was made the way it is today—complete with transistors. They need someone who gives them some kind of perspective—someone who can convince them that you could be born in one world, grow up in another, and grow old in a third.

Q  And could grandparents do that for them?

A  Grandparents could give them an idea it’s possible.

Q  Anything else they could do?

A  A whole lot. As people marry younger and have children younger, we have younger grandparents. They’re healthier. They’re more likely to be alive, vigorous, with lots of time. So I think we ought to fit grandmothers into the life of the community much more.

Q  What about grandfathers?

A  Grandfathers, too. But grandmothers are the ones that have the most time. Grandfathers are still actively working today, in most cases.

Q  Living apart as most of them do, what could these grandmothers do in the life of the family?

A  I think we could have G-TA’s—Grandmother-Teacher Associations. Grandmothers should be still tied into the school, should be going to the school, helping the school, conferring with the teachers about Jimmy’s spelling and Suzy’s arithmetic. They should be doing a lot of the chauffeuring. They have the time—much more time than young mothers.

Furthermore, that way we would not be turning grandmothers into cranky, disgruntled taxpayers. Now we graduate mothers from the P-TA the day their last child leaves school.

We say, “You don’t belong any more.” And so they get cut off from the whole school life of the community. Instead of being an asset, they’re often just a group of rather unhappy critics.