by Emma Gray: Emma Gonzalez and her peers are creating the history today we’ll read about tomorrow… 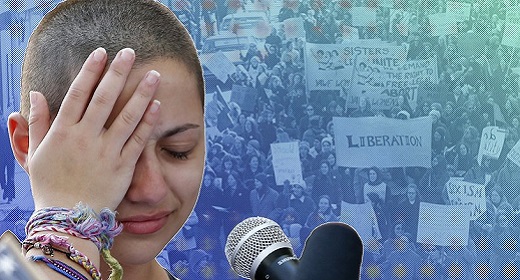 On Saturday afternoon, hundreds of adults in Fort Lauderdale, Florida, chanted, cried and cheered as a young woman with string bracelets and a buzzcut spoke forcefully into a microphone.

The woman speaking was Emma Gonzalez, an 18-year-old senior at Marjory Stoneman Douglas High School in Parkland, Florida. By the end of the weekend, she and her classmates had planned a march on Washington, and hundreds of thousands more people across the internet had watched her speak about the need for stricter gun laws.

In the wake of the Parkland shooting ― when yet another angry man with a history of abuse, who was able to legally purchase a military-grade weapon more easily than a beer, killed 17 people Gonzalez shared the halls with every day ― students like her have made the most forceful calls for gun control. Their voices are the ones that have managed to break through the “B.S.,” as Gonzalez put it, making it clear that America’s established response pattern to mass shootings ― outrage, thoughts and prayers, inaction, repeat ― isn’t enough.

Of course, young people of all genders have always been vital to social movements. They’ve often been the ones brave enough to imagine a better future for themselves and their peers. Young women in particular have played key roles in leading these movements, although they’ve received less public credit for doing so. They’ve long banded together in the name of policy change, protesting and picketing against injustices only to be mischaracterized by reporters or left out of historical accounts entirely.

Along with Emma Gonzalez, there are many more radical teenagers and women worthy of textbooks.

On the evening of Nov. 22, 1909, several thousand garment workers squeezed into Cooper Union’s Great Hall in New York City. The crowd was almost all women, many still in their teens. They were there to discuss the poor working conditions that plagued their industry — low wages, inhumane hours, abusive and unsafe environments — and whether they should call for a general strike among shirtwaist makers. This meeting was the culmination of a series of smaller strikes organized by female labor activists, several of which had led to arrests and violence against the picketing workers. The speakers slated for that evening included labor leaders such as the American Federation of Labor’s Samuel Gompers, the Women’s Trade Union League’s Leonora O’Reilly, and B. Feigenbaum of the Jewish Daily Forward. One after another, they expressed solidarity with the shirtwaist makers, talking at length about the terrible conditions the workers experienced, while failing to offer concrete actions.

Eventually, a slight 23-year-old Ukrainian Jewish woman named Clara Lemlich — erroneously described by reporters as a teenager, despite already being an experienced organizer — could stand it no longer.

“I want to say a few words,” she yelled out, before delivering a short, powerful speech in Yiddish.

“I have listened to all the speakers. I would not have further patience for talk, as I am one of those who feels and suffers from the things pictured. I move that we go on a general strike.”

The next morning 15,000 shirtwaist makers went on strike. By night, that number had grown to 20,000. Some estimate that as many as 40,000 shirtwaist makers eventually joined the movement. This strike,  known alternately as the Uprising of the 20,000 and (my personal favorite) the Revolt of the Girls, gave energy to the organizing efforts of women garment workers across the country. Within the year, thousands of women workers had gone on strike, from Philadelphia to Chicago. The 11-week-long Uprising of the 20,000 didn’t get the strikers all of their demands, but it did result in concrete progress: 339 shirtwaist and dress manufacturers signed contracts granting shorter workweeks, paid holidays, wage negotiations, and a promise not to discriminate against unionized workers.

Lemlich, who remained an activist throughout her life, gave an interview in 1954 about her early days as a labor organizer. “What did I know about trade unionism?” she said. “Audacity — that was all I had — audacity!”

In 2018, that’s all Emma Gonzalez and her classmates have, too.

We are going to be the kids you read about in textbooks.

Just over one year ago, President Donald Trump took office. His election months before felt, in some ways, like a referendum on the value of women (and people of color and immigrants and refugees and Muslims . . . the list goes on) ― one that we had lost. On the evening of Nov. 9, 2016, I walked in a daze under the gray, drizzly haze that seemed to permeate New York to meet three friends, all women who shared my single-minded desire to sit in a cozy, dark corner and plot the resistance — or at the very least feel a modicum of usefulness.

En route to the meet-up, I passed Cooper Union, which stands just around the corner from my office — the site of Clara Lemlich’s speech, the place where she had refused to be silent and allow inaction 107 years before.

In the months following the election, I found myself thinking a lot about women like Clara — women who had the audacity to speak out and organize for change before it was possible to rally the masses with a viral hashtag or even cast a vote at the ballot box. American history is filled with women who slowly but surely transformed the country. But since men’s stories are the ones that tend to dominate our history books, we hear less about the contributions of these extraordinary women.

Women such as civil rights leader Diane Nash, who co-founded the Student Nonviolent Coordinating Committee (SNCC) at the age of 22, and was instrumental in organizing sit-ins and Freedom Rides to protest segregation in the South.

Or Sarah and Angelina Grimké, white Quaker sisters and abolitionists who were the first women to testify on the issue of black American rights before a state legislature. They spent much of their lives speaking publicly against slavery, even debating men — something that was nearly unheard of at the time.

Or Sylvia Rivera, who at the age of 17 was one of the drag queens who fought back against police when they came to raid the Stonewall Inn, helping start the seminal 1969 Stonewall riots. According to the New York Times, as the riot began, Sylvia yelled: “I’m not missing a minute of this — it’s the revolution!”

Or human rights and antiracism activist and author Grace Lee Boggs, the daughter of Chinese immigrants who grew up to adopt the teachings of Dr. Martin Luther King Jr. and hosted Malcolm X at her Detroit home.

As OG feminist icon Gloria Steinem once said: “Power can be taken, but not given. The process of the taking is empowerment in itself.”

Each one of these trailblazing women took power where none was bestowed.

So did Emma Gonzalez.

On the front lines of every current political cause, you will find young people taking responsibility for their futures and future of their nation.

Today we are getting to watch that “process of the taking” play out right in front of our eyes. Necessitated by a political moment that is distinctly hostile to the rights of women, immigrants and communities of color, women (especially women of color) are leading the resistance — from the courts to the streets to Hollywood to the halls of Congress.

The students of Marjory Stoneman Douglas are planning walkouts and a national March For Our Lives. Alicia Garza, Opal Tometi, and Patrisse Cullors — the women behind Black Lives Matter — are channeling their movement’s energy into combating an administration’s open disdain for black and brown lives. Women’s March national co-chairs Tamika Mallory, Linda Sarsour, Bob Bland, and Carmen Perez are turning the massive energy the world witnessed on Jan. 21, 2017, into a movement with true staying power.

On the front lines of every current political cause, you will find young people taking responsibility for their futures and future of their nation.

Gonzalez is sure that she and her fellow student organizers will be in textbooks, because what is the alternative? In their short lives, they’ve already seen what happens when good people stay silent. For them, silence is not an option. How could it be?

In April 1912, Clara Lemlich argued passionately for working women’s right to vote. “We are here, and we are here to stay,” she said.