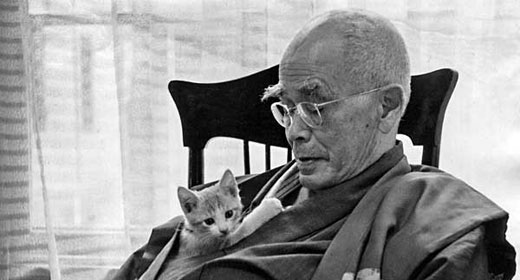 Zen, known for its distrust of symbols, rituals, and study of holy texts, Zen practice is mainly built around focusing the mind on the breath, a movement, or on an unchanging landscape such as a blank, white wall.

The mystical experience in Zen is called Satori (wu in Chinese). Satori is that which lies beyond most forms of insights such as those arising from contemplation or via imagery and is a intuitive grasp of the reality “beyond forms.” Suzuki says Satori has these characteristics:

1. Irrationality. “By this I mean that satori is not a conclusion to be reached by reasoning, and defies all intellectual determination. Those who have experienced it are always at a loss to explain it coherently or logically.”

2. Intuitive Insight. “That there is noetic quality in mystic experiences has been pointed out by (William) James…Another name for satori is “kensho” (chien-hsing in Chinese) meaning “to see essence or nature,” which apparently proves that there is “seeing” or “perceiving” in satori…Without this noetic quality satori will lose all its pungency, for it is really the reason of satori itself. ”

3. Authoritativeness. “By this I mean that the knowledge realized by satori is final, that no amount of logical argument can refute it. Being direct and personal it is sufficient unto itself. All that logic can do here is to explain it, to interpret it in connection to other kinds of knowledge with which our minds are filled. Satori is thus a form of perception, an inner perception, which takes place in the most interior part of consciousness.

4. Affirmation. “What is authoritative and final can never be negative. Though the satori experience is sometimes expressed in negative terms, it is essentially an affirmative attidude towards all things that exist; it accepts them as they come along regardless of their moral values.”

5. Sense of the Beyond. “…in satori there is always what we may call a sense of the Beyond; the experience indeed is my own but I feel it to be rooted elsewhere. The individual shell in which my personality is so solidly encased explodes at the moment of satori. Not, necessarily, that I get unified with a being greater than myself or absorbed in it, but that my individuality, which I found rigidly held together and definitely kept separate from other individual existences, becomes lossened somehow from its tightening grip and melts away into something indescribable, something which is of quite a different order from what I am accustomed to. The feeling that follows is htat of complete release or a complete rest—the feeling that one has arrived finally at the destination…As far as the psychology of satori is considered, a sense of the Beyond is all we can say about it; to call this the Beyond, the Absolute, or God, or a Person is to go further than the experience itself and to plunge into a theology or metaphysics.”

6. Impersonal Tone. “Perhaps the most remarkable aspect of the Zen experience is that it has no personal note in it as is observable in Christian mystic experiences.”

7. Feeling of exaltation. “That this feeling inevitably accompanies satori is due to the fact that it is the breaking-up of the restrction imposed on one as an individual being, and this breaking up is not a mere negative incident but quite a positive one fraught with signification because it means an infinite expansion of the individual.”

8. Momentariness. “Satori comes upon one abruptly and is a momentary experience. In fact, if it is not abrupt and momentary, it is not satori.