Putting Meditation Back on the Mat

by Caren Osten Gerzberg: SEATED cross-legged on a black cushion atop a yoga mat… 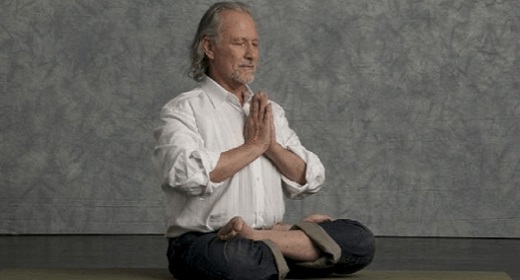 I struggled to keep my eyes closed and repeat the Sanskrit mantra in my head: ham-sa — I am that. Outside, on Third Avenue, police sirens wailed and cars honked as I tried to sit still in a room with eight other meditation students, keeping my breath slow and steady. Just as I was about to lose the focus on my breath, a soothing voice nearby chimed in: “You can hear the noises without getting attached to them. The attention comes from the inside.”

The voice belonged to Michael Bartelle, a tall, slender yoga and meditation teacher. The city kept up its racket, but for the next 18 minutes, Mr. Bartelle thoughtfully guided our midday meditation, occasionally offering encouraging comments. It was part of a one-hour class at Ishta Yoga that included movement and breathing exercises.

Ishta Yoga, with studios in Greenwich Village and on the Upper East Side, is one of a growing number of yoga centers in the city that are reporting increased meditation on the mat.

The asanas, or poses, of yoga are traditionally meant to prepare the body for meditation. But as yoga has been consumed by the gym and physical fitness industry in recent years — to the tune of an international yoga championship — many people have come to yoga for the workout, period.

Still, once they are there, they are often introduced to meditation, as well.

“Yoga is the gateway that opens the door for people to try modalities that they normally wouldn’t,” said Beth Shaw, founder and president of YogaFit, a fitness education program, based in Los Angeles that trains many of the yoga teachers at the city’s more than 50 New York Sports Clubs. A team from the clubs recently discussed with YogaFit the possibility of a meditation workshop at its annual conference for fitness professionals, which will be held in November in New York.

Cyndi Lee, the owner of Om Yoga near Union Square, which recently announced it would close its studio in late June, has an explanation for the seemingly greater enthusiasm for meditation among yoga students.

“The yoga community in New York City has matured,” Ms. Lee said. “I remember a time when we started with five minutes of meditation and a woman got annoyed and said: ‘I want to move. I want to sweat.’ Now they want to meditate.”

In August, Om Yoga introduced a meditation teacher-training program and has been running twice-weekly meditation classes. The Integral Yoga Institute, Jivamukti Yoga School and Pure Yoga, all in Manhattan, are among other centers reporting more students in their meditation classes.

At Ishta Yoga, Alan Finger, the founder and co-owner, said: “There’s a flood of more people wanting more meditation. I used to have about three classes a week — I stepped it up to five.” (A sixth is taught by Mr. Bartelle, alternating with Peter Ferko.)

Mr. Finger says that students often get a sense of what meditation is like by being in savasana, or corpse pose, at the end of a yoga class.

“At first, when people are in savasana, they may have a little snooze, but as they come and get more into it, they start to feel a different presence and say, ‘That was like meditation,’ and they start to explore more.”

Though most studios charge a fee for meditation classes that involve instruction, some, like the Jaya Yoga Center in Brooklyn, include meditation on their schedule simply to provide a time and space for people to come and sit, free.

“When people come in after a day of work or wake up in the morning, they are happy to shift their attention to something that’s a little more relaxing,” said Carla Stangenberg, who owns one of Jaya’s studios and co-owns the other. “Focusing on the breath and some phrases just calms you down, especially in New York City, where everything is just spinning around.”

A staff member keeps the time, and the rest is up to you and your breath. But why not just do it at home if you’re not getting guidance? 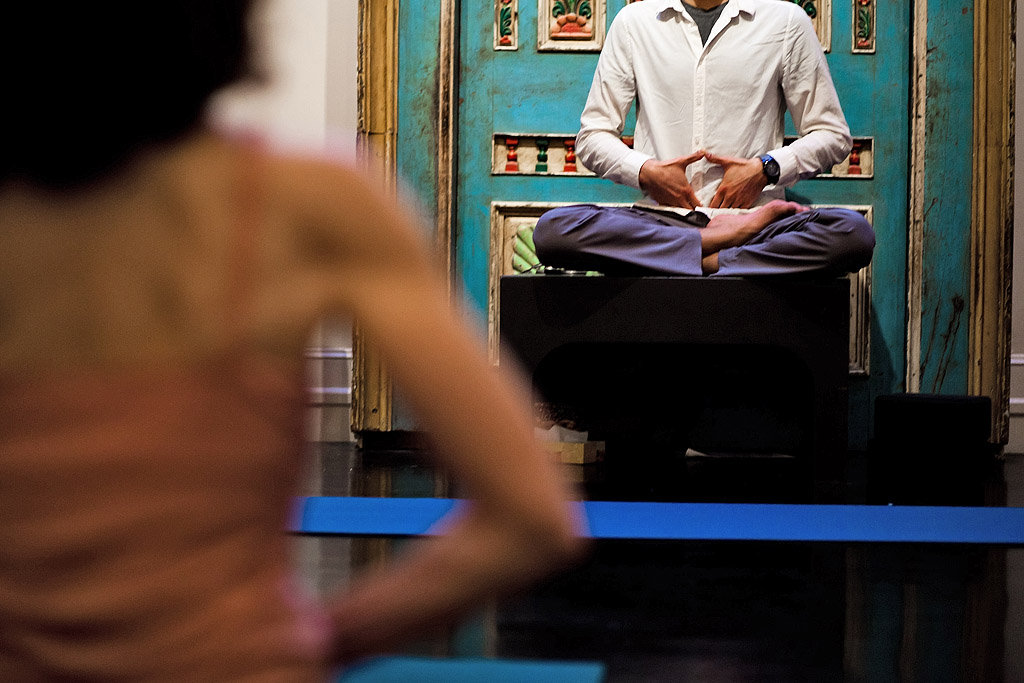 For many people, meditating in a group provides a deeper, more satisfying experience.

“Meditation is kind of like a dance class in that it’s better with other people,” said David Grotell, a student at my Ishta Yoga class. “There’s something about the energy. It would seem that if you’re not talking to people you’re not in contact, but you somehow feel close to others when you are meditating in a way that is not obvious.”

The heightened interest in meditation in yoga studios may be part of a larger movement toward the practice, which is clearly more mainstream than during the transcendental meditation craze of the 1970s.

When Sharon Salzberg, a meditation expert and teacher, began giving meditation workshops at Tibet House in the Flatiron district in 1999, about 30 people were in attendance. This winter, her class filled the room to its capacity, 135 people, with the overflow crowd finding space to sit on the floor.

“Meditation is no longer seen as fringe, esoteric and weird,” Ms. Salzberg said. “Its main association is now its link as a stress-reduction modality, and not just for coping, but also for flourishing.”

The Art of Living Foundation, an educational nonprofit organization, once offered a single meditation workshop a week at its office in Midtown; it now has four a week because of rising demand.

In addition to offering workshops at its Manhattan office, I Meditate NY, an initiative of the foundation, has teamed up with partners to offer meditation at various branches of the New York Public Library and at Whole Foods’ Wellness Club in TriBeCa. The next event, currently in its planning stages, is a meditation workshop in Central Park.

City College of New York is scheduled to begin a 10-week evening class next month called Introduction to the Organic Meditation Process. Part of CUNY’s Continuing and Professional Education Program, it will be open to those with and without meditation experience.

“Meditation helps you learn how to not be controlled by your emotions,” the teacher, Antonia Martinez, said. Or as Ms. Lee of Om Yoga put it, “People are realizing that meditation is a way to work with your mind, and the benefits are said to bring strength, stability and clarity.”