The Extraordinary Ordinary Life and Death of Elisabeth Kübler-Ross

by David Kessler: Ten years ago this month, Elisabeth Kübler-Ross died. She was the world’s foremost expert on death and grief, yet she was the most alive person I’ve ever met. 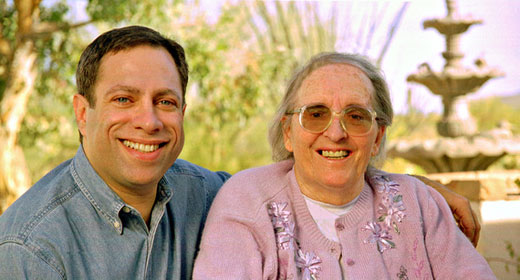 She was my mentor, my co-author of two books and my friend.

Just as Betty Ford brought addictions to our collective mindset, Elisabeth brought death and grief to the cultural forefront. Now, ten years after her death, she still looms large. Her books are in 34 countries with 40 translations.

She was instrumental in starting the modern day hospice movement. Her worldwide book sales are in the millions and her work is referred to in almost all medical and nursing schools. Today, her five stages of grief model is used daily to describe a myriad of situations. Google searches show they are not only used to describe grief, but the latest sports upset, the surprise political loss and sudden economic changes.

Millions worldwide know her work, but few knew her personally. I was fortunate to be part of her trusted circle.

Long before we met, I studied her prolific work. My road as a grief expert was much easier thanks to this groundbreaking woman who had changed the way we viewed end of life some 40 years earlier. She didn’t just learn about the dying, she invited the dying to be our teachers.

She pushed the envelope, not just in grief but also as a female physician. She was inducted into the American National Women’s Hall of Fame. She was the recipient of twenty honorary degrees and she delivered The Ingersoll Lectures on Human Immortality at Harvard University.

Her first book On Death and Dying was the first time death had been described in terms we could understand – as if the event of death had not occurred before the book was published 1969. It has been an international best seller ever since.

She was the woman who first identified the five stages of dying — denial, anger, bargaining, depression and acceptance. She simply observed something that happens in humans around change and called it what it is — the five stages of grief. Later we taught that these same stages were shown to be present in all loss — whether it is death, divorce, moving or changing jobs. I apply those stages to my work in all of these areas today.

When people learn of my closeness with Elisabeth, the two questions I get asked most are, “What was she like?” and “How did the death and dying woman die?”

Let’s begin with the first question.

She liked to be called simply Elisabeth. Elisabeth Kübler-Ross was far too formal for her. She would refer to herself as a Swiss Hillbilly, but this ordinary woman did extraordinary things with her life.

I’d hoped to meet Elisabeth for years and eagerly anticipated our first encounter in 1995 at an international conference on death and dying in Egypt. But this meeting never happened because she had a stroke that prevented her from making the trip.

Months later I called to see how she was doing and said, “I hope somehow, someway, our paths will cross.” She replied, “How about Tuesday?” This was a woman used to making things happen.

Elisabeth began her career in the male dominated field of medicine. However establishing herself as a doctor was far too small a goal for her. Elisabeth was a revolutionary.

In today’s world of TV shows about zombies, resurrections and funeral homes, it’s hard to imagine that there was a time not long ago when death was not discussed or even seen. A dying person was stigmatized and put in the furthest room from the nursing station.

Instead of a sterile, isolated death in a far-off hospital corridor, Elisabeth’s dream for the dying was simple and natural surrounded by loved ones in a home-like setting. Because of Elisabeth, the way we view death will never be the same.

While she certainly was an icon in the world of death, Elisabeth loved the simple things of life. A favorite of hers was Swiss chocolate and she would be offended if you referred to it as candy. Her favorite movie was ET. I believe she loved the symbolism of returning home. She also liked films such as Oh, God!; there was something appealing about God being played by a comedian such as George Burns that made her laugh.

Now let’s address the second question — how did she die?

In writing our first book together, Life Lessons, there was a chapter on anger. I said to Elisabeth, “We can’t have a chapter on anger without you sharing how you feel about being criticized about being so angry when you found out you were dying.” She replied, “People love my stages, they just don’t want me to be in one.” But it was more than that. She had become so symbolic of having a good death, people didn’t like the idea of her feeling anger. Apparently, she was just as human as anyone else and like everyone else, she went through her own stages.

As we were writing her final book, On Grief and Grieving, less than a month before she died, she asked for the tape recorder to send a message to our editor at Simon and Schuster. She simply announced, “I am done.” It was as if she had gotten the message from an unknown source. She had done so much reviewing of her life as we wrote and did much of her own grieving. That was to be our last working session. Our book was finished. And apparently so was Elisabeth.

In her next phone call to me, she would simply say, “Come.” For three days, her son Ken, daughter Barbara, another close friend named Brooke and I sat by her bedside, wondering whether this would truly be the end or if she would surprise us with one more recovery. But as the hours drew into days, we could see that this woman who had written over twenty books on dying was clearly dying herself.

For some who idolized her, there was an electric anticipation that something amazing might happen around her death — that the death and dying expert would have an unsurpassed experience. I don’t know what their expectations were, whether it would be music from on high or mysterious rainbows appearing, but none of that happened. Her death was quite normal.

Elisabeth’s death included all the ordinary pleasures that she had so passionately advocated for over the years — her room with lots of flowers, a large picture window, loved ones, her grand-kids and my kids playing at the foot of her bed. The ordinary nature of her death exemplified that the radical change she created had by then become a reality.

Today as I lecture, many people have an Elisabeth Kübler-Ross story. They remember when they first read her book, took a class or saw her speak. What do you remember about Elisabeth and her work? What’s your story?