Discovery At The Edge Of Empathy By Roshi Joan Halifax

by Roshi Joan Halifax: This excerpt is from Roshi Joan’s next book: Standing at the Edge: Finding Freedom Where Fear and Courage Meet, to be published May, 2018… 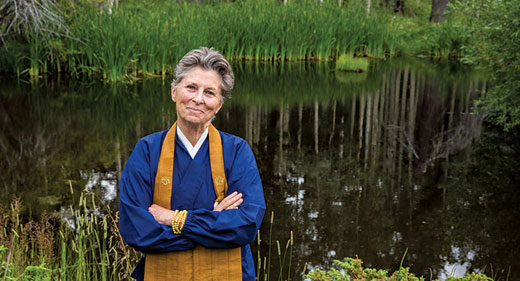 At a Mind and Life Institute conference on neuroscience and compassion in Japan, I shared with His Holiness the Dalai Lama the story of a doctor I knew who was selflessly caring for a woman with breast cancer. His Holiness put his hands together and bowed his head, his eyes wet with tears. But a moment later, his expression changed to one suffused with kindness as he acknowledged the doctor’s good work. It was remarkable to see how His Holiness was able to shift from a brief moment of empathy and seeming distress to compassion and happiness.

I had also witnessed his ability to make instantaneous shifts in topic and emotion during my visits to his residence in Dharamsala, where Tibetan pilgrims show up for blessings after their long and dangerous travels into India. We could be in the middle of an intense discussion about science, and when a Tibetan refugee entered, His Holiness’s eyes would immediately soften as he gazed at the man or woman before him. He would take hold of the refugee’s hand, slip into their space, and offer a prayer and words of encouragement. A breath later, he would turn back to his colleagues and resume technical conversation about neural pathways and the nature of consciousness. It was a powerful display of mental nimbleness

It’s well documented in the neuroscience literature that meditators have more mental plasticity and less stickiness (i.e., when thoughts “stick” or perseverate inside the mind) than non-meditators. Meditation practice, along with an unselfish motivation, can enhance our ability to sense into our own subjective experience and the experience of others (empathy), yet to let go of thoughts and emotions more easily by automatically down-regulating our emotional response, and seeing things afresh. For example, a practitioner may have just as strong or an even stronger response to an emotional stimulus, according to neuroscientist Antoine Lutz (Lutz, 2008a), but is able to recover composure much faster than a novice practitioner. In a paper on attention regulation, (Lutz, 2008b) Lutz describes how one outcome of “open monitoring” or open awareness meditation seems to reduce our tendency to get stuck, thus enhancing greater emotional pliancy.

Neuroscientist Gaëlle Desbordes and her colleagues have researched equanimity and meditation. Similar to Antoine Lutz’s research outcomes, Dr. Desbordes discovered that one of the benefits of meditation is “a more rapid disengagement from initial emotional response and faster return to baseline.”[1] This capacity can facilitate the shift from brief moments of empathic distress into equanimity and compassion.

I remember the moment at another conference when I approached His Holiness with a photo of a young Nepali boy named Tsering who had drowned in the Buddhi Gandaki River. An American doctor on our team had been knocked into the river by a huge stone that fell onto the trail from above. The doctor would surely have lost her life had not Tsering jumped into the seething Himalayan waters and grabbed a board for her to hang onto. Though an excellent swimmer, Tsering got caught in a powerful eddy and was swirled around opposite the doctor as they both clung to the board. He saved her life but lost his as he was swept downriver in the relentless monsoon-charged current.

A young Canadian caught the doctor and dragged her up onto a boulder. But we never caught sight of Tsering again. A terrible wave of shock passed through all of us as we realized that we had lost a good friend.

Shortly thereafter, I took a khata (ceremonial scarf) and Tsering’s photo to Dharmasala on behalf of his mother, hoping to ask His Holiness to pray for an auspicious rebirth for her son. As I shared the story with him, time seemed to stop. His Holiness was totally alert, his eyes tender. The space immediately around us was still; the people nearby seemed to be in a kind of slow-motion film. When I finished the story, His Holiness said to me that Tsering would be reborn as a great bodhisattva for his selfless and compassionate act of saving the life of another. These were the words I needed to hear. They were a gift I could carry back to Tsering’s mother.

If we can try to emulate His Holiness’s ability to quickly shift mental states—a skill we can cultivate through meditation—we will be less prone to falling over the edge into empathic distress. This mental flexibility supports us in making space internally as we encounter the suffering of another, and also to stay clear about the distinction between self and other. In our meditation practice, we learn to observe the thoughts, feelings, and sensations gliding and bumping through our subjective experience. The more skilled we are in not identifying with these experiences, but simply observing them, the more we can avoid falling victim to the suffering of others.

If we fall over the edge, and we will sometimes, all is not lost. Empathic distress might serve as an instigating force that pushes us into compassionate action to end the suffering of others and ourselves. We need some degree of arousal, some level of discomfort, in order to mobilize our compassion. We just need to be sure we don’t get stuck in the swamp of distress, because it can drive us away from caring for others. If we can learn to distinguish self from other, without creating too much distance between them and us, empathy will be our ally as we serve.

One final intuition: Perhaps we don’t slip into the skin of others so much as we invite others to inhabit us, to slip into our skin, into our heart, thus making ourselves bigger beyond even our imagining. Empathy is not only a way to come alongside suffering in our small boat, it is a way to become the ocean. I believe that the gift of empathy makes us larger—if we don’t drown in the waters of suffering. And empathy that is alchemized through the medium of our wisdom gives us the energy to act selflessly on behalf of others.

A world without empathy is a world that is dead to other—and if we are dead to other, we are dead to ourselves. The sharing of another’s pain can take us past the narrow canyon of selfish disregard and even cruelty into the larger, more expansive landscape of wisdom and compassion.

I also know that empathy is a human imperative, one that our basic goodness invites us to receive. Remembering the words of the great philosopher Arthur Schopenhauer: “How is it possible that suffering that is neither my own nor of my concern should immediately affect me as though it were my own, and with such force that it moves me to action?” Empathy, when it’s healthy, can be a call to action—action that is not about relieving our personal discomfort but about the great blessing of relieving the suffering of the world.