by Kate Baggaley: ‘It’s happening far faster than I would have ever expected, and it’s happening all over the world… 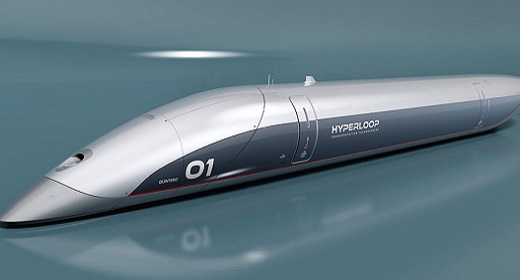 Elon Musk first described his idea for a futuristic transportation system that would send passenger pods through tubes at speeds of hundreds of miles an hour back in 2013. At the time, the idea of actually building and operating a so-called “hyperloop” seemed far-fetched, to say the least.

But hyperloops are no longer quite so hypothetical. A handful of firms are now competing to develop the necessary technology. And in addition to designing the magnetically levitated pods and testing them on small-scale tracks, the firms are taking preliminary steps to set up hyperloop routes in the U.S. and abroad.

“It’s happening far faster than I would have ever expected, and it’s happening all over the world,” said Dr. David Goldsmith, a transportation researcher at Virginia Tech.

One of the biggest players is Musk himself. His whimsically named Boring Company is planning to dig a hyperloop tunnel that would make it possible to travel from Washington, D.C. to New York City in half an hour (the fastest Amtrak trains make the trip in just under three hours). Meanwhile, a pair of California-based startups, Virgin Hyperloop One and Hyperloop Transportation Technologies, are developing routes in North America, Asia, and Europe.

Many engineering and regulatory hurdles must be crossed before the first paying customer boards a hyperloop pod and zooms off down a tube — and not everyone shares Goldsmith’s rosy outlook. “I wouldn’t plan to take your next vacation on them,” Juan Matute, associate director of the Institute of Transportation Studies at UCLA, said of the pods. “It’s going to take a lot of time to get implemented, if they ever are.”

But with roads in many areas badly congested and air travel subject to weather delays, high-speed tube travel sounds appealing to many. In addition to shaving hours off of intercity trips, hyperloops promise to be less polluting than planes and cars. And hyperloop travel could even transform the morning commute, potentially allowing workers to travel comfortably to worksites hundreds of miles away from their homes.

Hyperloop routes would consist of steel tubes roughly 11 feet in diameter that would be positioned on the ground or, in Musk’s vision, in underground tunnels. Either way, the routes would have to be picked carefully both to avoid existing infrastructure like roads and buildings and to make sure the routes take no sharp turns that could subject passengers to unpleasant jolts.

As for the pods, Hyperloop Transportation Technologies envisions 100-foot-long models fitted with virtual windows — video screens that would recreate the scenery outside — and capable of seating 40 passengers. Virgin Hyperloop One, meanwhile, has already built prototype pods fitted with leather seats and armrest-mounted entertainment screens.

The pods would accelerate and decelerate gradually, moving from one station to the next without stopping.

“The actual experience of riding in one of these things would be very serene,” Goldsmith said of the pods. “You’re sealed up in something like an airplane fuselage but without the air running past you,” he said, a reference to the fact that the tubes would be maintained at a partial vacuum to reduce air resistance that would slow the pods. (The pods themselves would carry their own air supply.)

In short, hyperloop trips promise to be quiet and smooth — and very fast. Ultimately, hyperloop developers aim to develop systems that will move pods along at speeds of up to 760 miles per hour. So far, the fastest any prototype pod has traveled is 240 miles per hour. That came last December during a test run that Virgin Hyperloop One conducted in the Nevada desert.

Virgin Hyperloop One hopes to begin testing full-sized hyperloop systems in 2021 and then to build hyperloops in the United Arab Emirates and India, among other countries. The company is also conducting feasibility studies for routes in Missouri and Colorado. Musk’s Boring Company has received a permit to begin excavating a possible hyperloop station in Washington, D.C. And Hyperloop Transportation Technologies is carrying out a feasibility study for a hyperloop linking Chicago and Cleveland and is considering routes in Europe, South Korea, and the United Arab Emirates.

Among other things, the tests will show whether it’s possible to maintain the partial vacuum within the tubes over hundreds of miles and if airlocks can quickly and fully seal off the tubes when passengers exit a pod.

Once construction of commercial hyperloop routes begins, it’s likely to prove very costly. Some estimates suggest one mile of a hyperloop route could cost up to $121 million, Forbes reported.

Obtaining land rights and environmental approval will complicate matters. So will the need to develop regulations and safety standards for a new form of transportation. “We really need to know a lot more about the safety features and what would happen if something went wrong,” Philippa Oldham, head of technology and manufacturing at the Institution of Mechanical Engineers in London, told The Guardian.

The price of hyperloop fares is uncertain. But as with existing modes of transportation, hyperloop travel will be more expensive at certain times and dates. As Matute put it, “It could be that if you want to go up to San Francisco [from Los Angeles] for cheap, you leave at 3 a.m., but if you want to go at 7:30 a.m. and have this life where you’re living in one city and working in the other, it will be a lot more expensive.”

When will commercial hyperloops begin operation? “Possibly, in a few years a few single lines can be in operation,” Kees van Goeverden, a transportation researcher at Delft University of Technology in the Netherlands, told NBC News MACH in an email. ”But I do not expect that a coherent system will be operated before 2030.”