Yoga In Schools May Help Kids With Anxiety

by Alice G. Walton: At a time when stress in U.S. schools is on the rise, the results of a new study hammer home what others have shown: 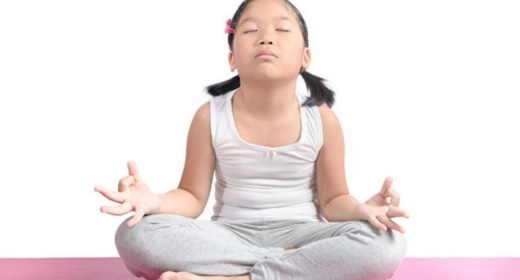 that yoga in schools may be a great benefit to kids’ mental health. The results, published in Psychology Research and Behavior Management, add to an already-convincing body of evidence, showing the range of benefits that yoga and meditation can confer on kids’ psychological development.

The new study, from Tulane University, randomized third-graders who had some degree of anxiety to receive either a yoga and mindfulness intervention for eight weeks, or to receive usual care. Students in the yoga/mindfulness group had 10 sessions of Yoga Ed. either in the fall or spring; each session lasted 40 minutes, and took place in the classrooms before the school day began. “The session content included breathing exercises, guided relaxation, and several Vinyasa and Ashtanga poses appropriate for third graders,” the authors wrote in their paper.

Students in a control group received usual care, which included social worker-led counseling and other activities. All participants also filled out questionnaires that gauged quality of life and life satisfaction across a number of different variables, before, during, and after the treatment period.

Kids who were given the yoga and mindfulness intervention improved in a couple of important measures, including psychosocial and emotional quality of life.

“The intervention improved psychosocial and emotional quality of life scores for students, as compared to their peers who received standard care,” said study author Alessandra Bazzano in a statement. “We also heard from teachers about the benefits of using yoga in the classroom, and they reported using yoga more often each week, and throughout each day in class, following the professional development component of intervention.”

She says that she and her team picked third grade because it’s a year where the material kids are required to learn is getting more complex and academic pressures are ramping up.

“Our initial work found that many kids expressed anxious feelings in third grade as the classroom work becomes more developmentally complex,” Bazzano said. “Even younger children are experiencing a lot of stress and anxiety, especially around test time.”

Past studies have certainly pointed at the same findings, for kids and teens. One study a few years ago found that a mindfulness training helped boys with ADHD on behavioral and attention measures. Others have illustrated that yoga and mindfulness interventions can help improve kids’ general well-being and mood, and reduce symptoms of depression. Another study found that kids who learned mindful awareness practices (MAPs) had better executive function after eight weeks of training. Finally, other research found that a mindful yoga treatment helped kids improve their ability to self-regulate over the longer-term, a one-year study period.

So the results of the new study aren’t totally surprising, but again, they add to the growing body of evidence showing how yoga and mindfulness can affect the developing brain, behavior, and mental health. At a time when the most developmentally important learning opportunities are being stripped away in U.S. schools—recess time, art and music, and hands-on learning—and stress levels are rising, the study points to an effective way for schools to help kids deal with it all.