by Deepak Chopra, M.D.:  Without taking a poll, it’s safe to say that people who believe in God also believe that he answers prayers… 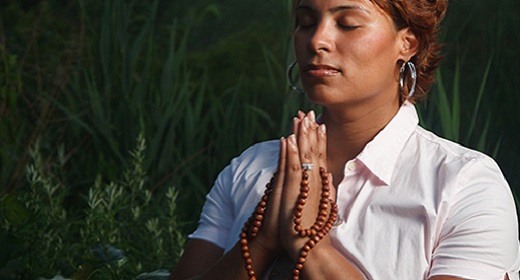 If he didn’t, one would be left with an indifferent, distant deity who pays no attention to human affairs. This alternative is hard to reconcile with faith, and so believers are left with a God who seems to answer prayers selectively.  It’s as if there’s an invisible telephone line to Heaven, and when you call, sometimes God picks up and sometimes he doesn’t.

I’ve simplified the scheme—the theology of prayer gets very complicated—because for most believers, praying is simple. You entreat God to do something special for you, and you take your chances. For every answered prayer, millions go unanswered. God must be a selective listener, or else there’s something wrong with the person who is praying.

Despite this frustrating and irrational setup, who hasn’t turned to prayer in times of greatest need?

To get to the heart of this question, we should start with a blank slate. Set aside your image of God as a father sitting on his throne somewhere above the clouds. Such images differ from one religion to the next and are clearly projections of the human mind validated only by cultural myths and traditions. Second, lose the notion of the invisible telephone line. If God is omnipresent, there is no distance between you and the one you pray to. Finally, strip God of all human attributes, including gender. Whatever God is, the reality must be superhuman, however you define the term.

In the Indian spiritual tradition, these first steps were taken thousands of years go. The slate was completely clean, and therefore one could ask the most basic question: Why does any desire come true? For a prayer is essentially a desire or intention. It differs from mundane intentions like wanting a candy bar or intending to do a good job in one thing only: the desired object seems out of reach. We invoke a superhuman power when human powers fail.

This is where the Indian sages had a brilliant thought. What if mundane intentions are not different from prayers? This possibility defies the logic of prayers if you think you are telephoning God. What links all intentions, no matter how extraordinary, is that they happen in consciousness. So the mystery of prayer turns into a more fundamental investigation into how consciousness actually works. Clearly the intention to eat a candy bar or to do a good job at work brings the mind into contact with reality in such a way that intention is connected to outcome. So why isn’t this true when you pray for a friend to recover from cancer or for peace in the Middle East?

The answer, according to the Vedic rishis, who explored consciousness more deeply than anyone else, comes down to three aspects that enter into any intention, indeed into any thought.

In Sanskrit these three elements are known as Samadhi, Dharana, and Dhyana, and when all three are fused, the entire mechanism is called Samyama.  There’s no need to dwell on these terms, only to point out that the success or failure of an intention depends on the effective use of one’s awareness, not on a request to a deity who may or may not be listening.  Samyama basically means to bind or hold together, and when all three of these components are unified, that’s what makes for the strongest intentions. You have gone deep enough into your own self-awareness that you can affect what happens in the outer world; your intention is one-pointed rather than scattered; and your mind is steady while remaining fluid and flexible.

The Obstacles in Prayer

If this explanation is correct, it describes unanswered prayers as the product of a mind that is restless, shallow, conflicted, or unable to focus. All of us suffer from these obstacles.

Answered prayers, on the other hand, represent a kind of total clarity that may come at any moment, like the sudden parting of the clouds, and at such a moment the mechanism that fulfills intentions works smoothly.  Although Samyama is identified in the tradition of Yoga as a high attainment, it seems reasonable to say that the same mechanism exists in everyday consciousness. After all, to live is to carry out intentions.

Once you understand how the mechanism works, you have a choice. You can meditate or pursue other spiritual techniques that bring the three elements of intentionality together. The results will not be the same on every path. Some people will experience a prayer coming true, others will be able to live in the present moment, and others still may feel that they are connected to God.

As straightforward as this description of intentions is, it gives rise to its own questions, which we’ll explore in the next post.