by Seth Mullendore : California’s recently adopted building standards require solar to be a part of all new residential construction… 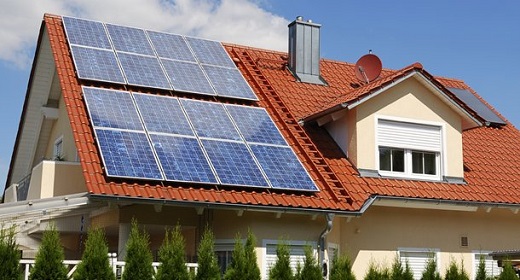 As the first state to enact such a standard, it’s been lauded as a historic and game-changing event for solar power in the U.S. But some have argued that the new standards don’t go far enough. There’s been less coverage about what the standards don’t do — they don’t meet the goal that California put in place in 2008 to have all new homes be Zero Net Energy (ZNE) by 2020.

The California Energy Commission (CEC) explains why in a frequently asked questions document, which accompanies their decision to adopt the standards. The document also explains why battery storage is included in the new building standards.

For those not familiar with the concept of ZNE, it means that, through advanced efficiency measures and on-site generation, a building can produce as much energy as it uses over time (though not necessarily producing and using energy at the same time, thus the term “net”).

In the FAQ document, the CEC explains that California’s energy landscape has changed significantly since 2008, primarily due to the state’s Renewable Portfolio Standards and net energy metering rules. Both brought about a lot more renewable generation and a much cleaner grid than the state had a decade ago. Because California is trying to figure out what do with all the solar energy it already has pouring onto the grid every day, the CEC notes, “It is ideal to generate the electricity and have it used onsite versus exporting it to the grid at a time it may not be needed. When the rooftop solar generation is entirely used to offset on-site electricity consumption, then the home has virtually no impact on the grid, reducing the home’s climate change emissions.” Translation: let’s not flood the grid with a bunch of additional solar just to meet ZNE requirements.

The CEC goes on to say that, moving forward beyond these new standards, the most important outcome will be for a building to produce and consume energy “at times that are appropriate and responds to the needs of the grid, which reduces the building’s emissions.” Which brings us to why battery storage is, for the first time, included in the building standards.

The new standards incorporate storage into the equation in a couple of places: 1) when paired with storage, the required solar system size can be reduced and 2) the inclusion of battery storage can be used as a credit against what are known as “energy design rating requirements,” which are used to evaluate a building’s overall compliance with the codes.

To qualify for these adjustments, the battery system must meet certain requirements, including how the system is configured to operate. The battery storage system must be designed to achieve one or more of the following: 1) maximizing solar self-consumption (using more of the energy onsite instead of exporting it to the grid); 2) load shifting (moving consumption from periods of high demand on the grid to periods of low demand); and 3) “grid harmonization” (basically, participating in a grid services program such as demand response). Notably, backup power is not on this list. Backup power is not prohibited, but the battery must do more than just sit there waiting for an outage in order to count toward meeting the building standards.

The guidelines are designed to incorporate battery storage so that it can help new residential buildings become good grid neighbors, with PV systems that can limit the excess energy they dump onto the grid when it’s not needed and help out when the grid is overloaded with demand for electricity. As Bernadette Del Chiaro, executive director of the California Solar & Storage Association, explains, the decision to incorporate storage acts to “head off this issue [of solar over-production] at the pass. You should really think of this mandate as solar on the roof, battery in the garage.”

It’s unclear if the standards will mark a new path for California, away from ZNE goals and toward buildings that have enough flexibility to use, or not use, energy as grid needs fluctuate. From its statements, the CEC certainly appears to view battery storage as an integral part of the state’s energy future.

This potential shift raises the question: Is ZNE the right goal for buildings (or cities or states)? If lowering emissions is the ultimate goal, then maybe not. As the CEC lays out in their response to questions, buildings (and cities and states) that are able to shift and change their energy needs to match the availability of clean energy (whether generated on site or somewhere else on the grid) may be a better suited to achieve our emissions goals. In light of this, perhaps FRE (Flexible Responsive Energy) should be the new ZNE.