by Deepak Chopra, M.D: To say that prayers are answered isn’t the same as saying that God answers prayers… 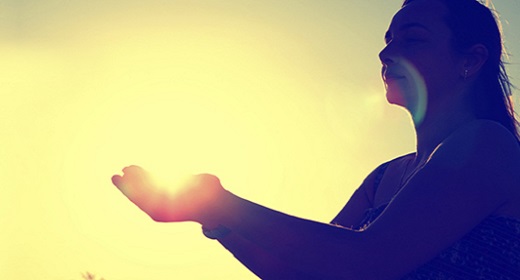 In the first case, a thought manifests as reality. You wish, intend, or ask for an outcome, and the outcome appears. In the second case, a supernatural being in the sky listens to millions of requests every day and kindly responds to a few while turning his back on the vast majority. The first post in this series was devoted to a consciousness-based explanation for prayers as opposed to a religious explanation.

The question automatically arises: If answered and unanswered prayers have a basis in our own awareness, what creates the difference? Here, I think, the religious explanation leads to serious difficulties. If you pray to be healed, for example, and the healing doesn’t come, religious thinking puts the blame on you. God has not granted your prayer, the reasoning goes, because you don’t have enough faith. Or you didn’t surrender to his will. Or you have secret sins in your heart that you haven’t repented of. These are time-honored explanations, and the problem with them—as with the existence of God—is that they can’t be proved one way or another. Does God hate you? Is God simply unfair? These are questions that have no basis for a valid answer.

The Mysterious Realm of Cause and Effect

On the other hand, consciousness is undoubtedly real. How to explain its origins remains a mystery, but we all think, and one mode of thinking is to intend for something to happen. If this something is within physical reach, you can reach for it. Grabbing a pizza, starting the car, getting out of bed in the morning—our choice to connect cause-and-effect in these cases is considered normal and natural. Other intentions seem supernatural because the link between cause and effect is invisible.

Yet the reach of the supernatural is actually quite arbitrary from culture to culture. An airplane might easily seem supernatural to an aboriginal culture, or the action of aspirin to eliminate pain, or the ability of a bullet to kill a deer. Before labeling this as a primitive reaction, consider that in modern society we have no explanation for where thoughts come from or how the invisible quantum field gives rise to the appearance of solid, tangible objects. We simply accept that some line of cause-and-effect exists, which will be clarified by future scientists. This article of faith breaks down when you ask the obvious question: Where do cause and effect come from? Ever since the quantum revolution of a century ago, Einstein’s General Theory of Relativity and Heisenberg’s Uncertainty Principle disabused physics of naive realism, the notion that reality matches what our five senses tell us.

We live in a universe that is radically different from what our eyes and ears perceive, and one major difference is known as “non-locality.” Even though a rose bush growing in your yard looks isolated, alone, an intact, it is actually an outcropping of the quantum field at the microscopic field, and its position in time and space isn’t local at all. The quanta from which matter arises are at bottom only probability waves, extending infinitely in all directions. At an even finer level all matter and energy vanish into the quantum vacuum, which is a field of pure potential which would appear to the naked eye as a void. So the rose bush is nowhere and everywhere at the same time.

Physics remains baffled about how the non-locality of quantum events turns into the obvious locality of a rose bush, which sits in your yard, not on Mars or the Andromeda galaxy. For a long time the scientific mind resisted the possibility that quantum behavior might apply in everyday life. Reality was divided into two compartments, one for quanta, which are allowed to act as strangely as they like, and one for rose bushes and other “classical” objects, which act in the normal cause-and-effect way. But the notion of two realities is uncomfortable, and in recent decades a genuine effort has been made to find the link between quantum and classical, so that we can have a single reality whose laws and rules are united at some deeper level.

What Happens to Prayers

This brings us back to prayers. Let’s say that a prayer is a classical event, or feels like one. You, a unique individual, have a particular request, which you voice in words that no one else is speaking at that instant.  What if this classical event gets processed at a non-local level? The notion isn’t far-fetched, because it seems that the mind-body link does consist of fluctuations at the quantum level. If this is so, then any thought, not just a prayer, has quantum implications, and if that’s true, suddenly we have taken a trip into the realm of the non-local.

Your prayer will be answered, or not, depending on events happening out of sight—but not out of mind. By expanding our definition of mind, we can account for answered prayers, and even set down their behavior. Once a prayer is allowed to leave the classical world, it doesn’t become supernatural. It enters another level of Nature, and what happens there is fascinating.