by Christina Sarich: The modern-day shaman has evolved from one of the oldest known spiritual practices of humankind… 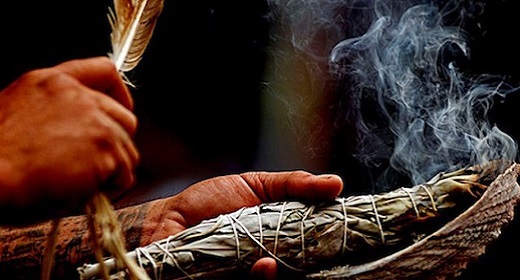 Shamans go back at least 100,000 years. It is prevalent in Northeast Asiana and Arctic cultures, but spread around the world, and is perhaps most familiar to the average person today in the form of South American shamanism and the use of Ayahuasca which uses plant medicine to aid the shamanic journey.

Utilizing a potent psychedelic present in the plant compounds called N,N-Dimethyltryptamine or DMT, an individual seems to be able to access layers of his subtle body and etheric consciousness which allows profound growth in a very short time. This is one of many shamanic practices that have evolved from the first mention of the word “shaman” coming from the Tungus tribe in Siberia and made popular today by public figures like Graham Hancock.

As a modern-day shaman Sandra Ingerman implores, changing times are causing more people to awaken to their own personal shamanic journey with or without Ayahuasca.

Any shamanic journey is one that helps awaken our consciousness to embody traits that we will desperately need moving into the future: compassion, self-awareness, expanded understanding of the material and spiritual world, and a general awareness that human consciousness is not limited to the physical body.

While the Gods and Goddesses of every culture embody the shamanic mythology of humanity, we too are shamans.

Whether you practice “dreamtime” as the ancient Aboriginal tribes did to access this state of higher consciousness, or you use drumming, dance and sound like the Korean shamans or Celtic healers to enter an altered state, you are welcoming aspects of your consciousness to come to the fore that have likely remained dormant for most of your life.

There are many methods to ignite this altered state, as Hancock himself admits in an article on the subject,

“What I want to get across, is that indeed, things that cannot be explained, have a remarkable way of being connected! Whatever the trigger; be it REM sleep, lack of sleep, extreme anxiety, a malfunctioning of our brain’s internal regulator, lack of food and water, purposeful deprivation and meditation, or the introduction of external DMT or psilocybin – the result is the same. Our brains use all their naturally equipped, necessary physical pathways to produce alternate states of perceived realities.”

Let’s apply this to a real-life challenge. As Ingerman states, “Shamans look at the spiritual aspect of illness. An illness might manifest on an emotional or physical level but the shaman is looking for spiritual imbalance or disharmony.”

When we are stuck in our limited worldview, we often cannot fathom that a recurring health problem or emotional issue like depression has a deeper root cause. It could be that we aren’t living our life’s purpose, or that we are carrying the shame of our ancestors’ deeds or any other number of seemingly unrelated issues.

Shamans can see directly into the root cause of the physical imbalance because it appears first in the etheric and emotional bodies, what ancient yogis and shamans called the koshas. These layers of our being offer a complete template for expression of consciousness in physical form.  Your personal expression of consciousness is altered by what quantum physicists call the morphic or resonate field.

You could call Rupert Sheldrake and David Bohm the intellectual shamans of our time, as they understand how our potentials are realized or stifled from the quantum level – which just happens to also be the shamanic level of consciousness.

Our infinite potential to be healthy, vital, joyful, and disease-free is only limited by our consciousness. Modern, mechanical medicine has yet to catch up to his notion, and in fact demonizes the shaman’s ways so that we don’t stray from a system with an aim to keep us disconnected from our higher consciousness. This is because the result would be a total awareness of the root cause of all our emotional and physical ailments, and our complete, unalterable ability to change that reality – all through consciousness and intent. The modern medical system does not even acknowledge the soul, let alone its loss and confusion, which causes every disease from depression to heart disease, to anxiety, grief, and even drug addictions.

The shaman simply calls forth a more complete state of awareness, using a multitude of effective tools, often including a ceremony of some form, but not excluding:

Each of these tools helps to entrain the brain into a certain oscillatory state which induces higher consciousness. They tend to “loop” or lasso the brain into Theta, Delta, and even Lambda and Epsilon.

For example, the Lambda state of awareness (100 to 200 Hz) is associated with wholeness, awareness and mystical or out-of-body experiences. Yet most of us are unaware (arguably by design) of how to trigger this state of consciousness.

As the DJ Dino Sabatini says, “Try listening to the ‘Sacred Drums of Burundi’ and you’ll see that the effect of this music is not very far from the effect caused by techno or electronic music, as these musical styles both work on the concept of loops.”

The modern shamanic journey is no different from the ancient one. We have simply been distracted from its purpose and alienated from its power. A shaman’s job might simultaneously be to act as a lost mother, a friend, a confidant, a pharmacist, a psychologist, and a healer, but ultimately they are a cosmonaut and supernatural guide into the realms of your own consciousness which have been neglected and are eager to be re-awakened.