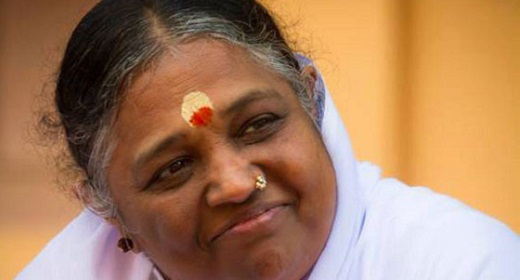 We must perform every action with joy and derive bliss from our work. How is this possible? We gain the real fruits of labor when the intellect and heart come together. It is not tiring for a mother to look after her baby, whereas it is for a nanny. It is not action in itself, but the attitude behind that gives us happiness or sorrow. Whatever we do, we should also think about what we can give others, instead of thinking only about what we can gain from it. This is Karma Yoga.

Contentment is the greatest wealth. A contented person is rich even if he or she is the poorest person on earth. Conversely, even if a man is financially rich, he is poor if he lacks contentment. Therefore, strive to become contented.

A woman gave birth to two children, one of whom became a collector and the other a clerk. If the clerk bemoans his fate, regretting that he could become only a clerk, would it be of any use? Instead, if he performs his duties conscientiously, he will be promoted to a senior position. Comparing oneself to a superior might give rise to sorrow. There are many people working in more subordinate positions. Why do we not think of them? If we can contemplate any issue intelligently and with discernment, we can gain contentment. Only then we can live peacefully and grow.

Once, after many days of waiting, a man was called for a job interview. But though he went for the interview, he did not get the job. Disappointed, he walked to an isolated place, sat down with his head in his hands, and gazed into the distance. Someone approached him from behind and tapped his shoulder.  When he
turned around, he saw a boy wearing colored glasses. Even though he felt annoyed that the boy had interrupted his solitude, he did not show it. He asked the boy what he wanted. The boy gave him a wilted flower and said, “ Look, what a beautiful flower!” Though irritated by the sight of the wilted flower, the man curbed his anger and said, “ Yes, it’s beautiful.” The child then said, “How fragrant it is!” These words irritated the man even further. He thought, “Is this boy crazy? What fragrance does this wild flower have?” In order to get rid of the boy, the man said, “You’re right. It is pretty and sweet-smelling.” Hearing this, the boy happily said, “ I brought this for you. Please take it. May God bless you!” The boy then smiled innocently. When the man saw that smile, he felt his burden lessen. He thanked the boy.
Hearing the sound of something falling on the ground, the man turned around. He saw the kid walking away, tapping the stick that was in his hand on the ground. That was when the man realized that the boy was blind. In that moment, he felt that the flower in his hand was the most beautiful one in the whole world.
He ran after the boy and hugged him. With tears streaming down his cheeks, the man said, “ This is not a wilted flower. It is a blossom from your heart.” Through the flower, the man enjoyed the beauty and fragrance of the boy’s innocent heart.

Then the man reflected, “ I was feeling despondent because I did not get a job. I even contemplated suicide. As for this boy, even though he is blind in both eyes, how happy he is! Not only that, he makes others happy, too.”

The biggest obstacle preventing us from enjoying bliss in life today are thoughts of oneself. We are unable to forget ourselves and love others. “ I want everything. I want to take everything” – this is the prevailing sentiment. Without eliminating ego, we cannot experience bliss in life. One might still be able to lead the blind if he or she has love in the heart, but it is difficult to guide someone whose heart has become blind. The blindness caused by egotism pushes one into darkness. Because of this ignorance, it is as if we are asleep even when awake.

One who has become afflicted with the cataract of the ego can never enjoy the beauty of the world. We might be different on account of birth or life situations, but death is common for everyone. However, one who has risen above his ego does not die even in death.