by Stephen Edelstein:  Tesla Model S 90D has logged over 400,000 miles in three years. How does a car rack up so much mileage so quickly? 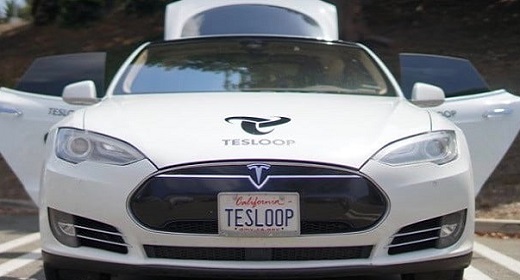 This Model S, dubbed eHawk, is operated by Tesloop, a shuttle service that offers rides on select routes in Southern California and Nevada.

Tesloop launched in July 2015, and the eHawk was its first car. The service was started by Los Angeles-area teenager Haydn Sonnad, who just wanted his own Model S and needed a way to pay for it. Since then, Tesloop claims to have transported thousands of passengers along routes connecting cities like L.A., Las Vegas, San Diego, and Palm Springs. The company said cars in its fleet average 17,000 miles a month.

The eHawk has undergone three major services during its time with Tesloop. The car’s front drive unit (this is an all-wheel drive “D” model with electric motors for the front and rear axles) was replaced at 36,404 miles. The car’s 90-kilowatt-hour lithium-ion battery pack has also been replaced twice: in August 2016 at 194,237 miles, and in January 2018, at 324,044 miles.

But the battery packs weren’t replaced because they were too degraded, according to Tesloop. The first replacement would not have been necessary if a firmware update had been available earlier, the company said. The car’s range estimator would decrease by 10 miles, even without any loss of charge, something Tesla attributed to an issue with the software that calculates range. The second pack was replaced when the car was brought in for an unrelated issue, Tesloop said.

Both battery packs and the front drive unit were replaced by Tesla free of charge. In between those major services, the cars also had some minor work done, including calibrating the sunroof, replacing the driver’s door handle assembly, and several tire replacements and wheel alignments. If you want to get really nerdy, Tesloop has compiled the maintenance records of its cars in a Google Spreadsheet you can pore over.

Overall, Tesloop estimates that maintenance costs for the eHawk total around $19,000, or $0.05 per mile over the 400,000 miles the car has covered. Tesloop estimates the maintenance costs for a Lincoln Town Car or Mercedes-Benz GLS-Class— two internal-combustion vehicles well suited to shuttle services — would be $88,500 ($0.22 per mile) and $98,900 ($0.25 per mile), respectively, over 400,000 miles. Tesloop also maintains eight-year warranties for its cars. It estimates that the eHawk can cover another 600,000 miles before the warranty runs out.