The Space where Ram Dass and Timothy Leary Diverge

It is hard to chronicle the era of the late 60s without reference to drugs—or to the Woodstock festival, 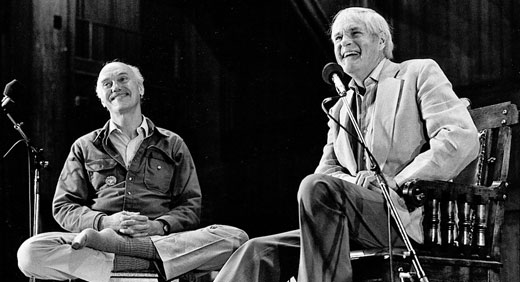 itself, which was complete with “acid tents.” It was Timothy Leary and Richard Alpert, who pioneered their use in therapeutic settings….although it cost them their professorships at Harvard. Although Alpert would take a different path into Hindu spirituality, Leary continued to publicly promote the use of LSD and became a prominent player in the 60s counterculture.

Their work is chronicled in the documentary from 2014, Dying to Know. Narrated by Robert Redford, it patches together conversations between the two iconic figures throughout their friendship, which spanned five-decades. This analysis is more a close up of the most philosophically interesting part, than it is a review of the documentary, itself. It is one of their last conversations, erupting at the very end of the movie, in which, spawned by a discussion of what happens after death, they wrangle over the existence of the soul, which in Hinduism, is called the atman:

Ram Dass: I’m interested in awareness AFTER the brain gets eaten. I think about the dissolution of conceptual structures.

Timothy Leary: There are neurological and anatomical explanations for hallucinations.

RD: (I’m interested in how death) catapults us into non-conceptual space…my sense of continuity of awareness beyond the brain…is it just my wanting to keep something going?

TL: “Superconsciousness.” And it…she…hangs around the brain.

TL: (Rolls eyes)…A wonderful organ to pump blood. These Indian gurus…they’re using the heart as a metaphor? A bad metaphor.

RD: It’s in the lower, right hand corner…the size of your thumb…the atman…

RD: You gotta get a better technology.

RD: In LSD, you saw all that, but it went by so fast, and you didn’t have a model to save it…it just went through…so much went through…but what we have conceptualized, is just a tiny edge…a trivia of the whole model.

These kinds of disputes, not unfamiliar to them, serve as a demonstration of opposites in harmony. It’s science and religion cutting the rug. It’s the Yin and the Yang in play, where Leary acts as Yang to Dass’ Yin…with his hard-edged, masculine demand for certainty, alongside Dass’ softer way, and willingness to surrender into the realm of the intangible.

As a relevant aside, what is often forgotten, is that science and religion started out asking the same questions… What is reality?… What am I?… Is there a God?… Is there an afterlife? It was all housed under the umbrella term philosophy. Even the category of “scientist” didn’t exist until the 19th century…1833, to be exact, at a meeting of the British Association for the Advancement of Science. Guys like Newton were called Natural Philosophers. The different arenas just embraced different methods of ascertaining Truth.

Psychedelic—
These two scientists of the mind have been inextricably bound together, since their meeting in 1961. As if hand chosen by cosmic destiny, both lived at a time, a uniquely situated precipice within the timeline of the 20th century – when it was possible to explore these age-old questions in ways that were as yet, unprecedented in the western world.

Impelled, by both deep curiosity and mutual admiration, these academic big wigs journeyed through the inner landscapes of human consciousness. They went from theory and books to personal experimentation. First hand empirical investigation into uncharted territory, aided by psilocybin and eventually, LSD.

Each had just the right amount of ingredients to get the mixture right…just enough personal trauma and general suffering, together with the right amount of natural disobedience and rebelliousness. For Leary, it was profound grief after his first wife’s suicide. Ram Dass (then, Dr. Richard Alpert) was homosexual at a time when it far from acceptable.

Coming to Different Conclusions—
Something deeper was revealed through this exchange in the documentary. Like two trees growing in different environments, in different soil and all around conditions, not knowing the long term results until the trees reach maturity… But eventually, one tree bears fruit that tastes like love and feels like an open heart, and the other bears fruit that tastes like sarcasm and feels like vexation.

Ram Dass had found something that Leary hadn’t, and it has the aroma of divinity….while Leary’s projection carried the unmistakeable flavor of anguish. One of Leary’s five wives offers us some insight, when she explains the disconnect Leary has always had between his mind and his heart… ”the mind was always in charge and the heart got left behind,” she explained.

Roads Diverge—
It was 1967. Ram Dass wasn’t Ram Dass yet. After traveling the Himalayas, with fellow westerner, Bhagawan Dass, he stumbled into his first meeting with a little saintly looking man, wrapped in a blanket …the man who would become his teacher…Neem Karoli Baba (Babaji). Here he describes their first encounter:

He was forever changed.

Ram Dass would subsequently explore the same philosophical questions through different means…spiritual means. Under the guidance of his Guru, he would eventually discover the biggest Truth of all: I am a soul….that which would forever separate him from Leary.

“You have to be somebody before you’re nobody.” The idea, in eastern teachings, is that the realization of our truest essence—that we are spirit—engenders a natural breakdown ofthe ego, with all its attachments to identity and roles, in tow. There is a kind of death that occurs through the realization of what we really are.

Ram Dass wanted more than a taste…he wanted to discover the means of how to integrateand maintain expanded states of consciousness. It was this desire that led Roshi Joan Halifax—featured in the documentary—to dig deeper, as well, as she embarked on her journey through Zen…searching for a means to really train the mind to be stable…in lieu of what she referred to as merely temporary, “decorative states.”

An Interesting Paradox—
They started together… but ended up continuing their lifelong journeys, exploring the inner dimensions of who we are, but on two very different different paths. Leary, exploring the mind with psychedelics, and Dass, with Bhakti Yoga…a devotional path, aimed at union with God through love.

Leary was at once a rebel against everything, but at the same time, not willing to waver from this very milieu….one that wouldn’t support anything less than empirically tested results. It was almost as if he were saying, “here you go…by your very standards, I’ll reveal your fallacies and limitations!” …As if he wanted to stick it to the world, using its own measurement scales.

Meanwhile, Dass traipsed barefoot into a far away, exotic land, steeped in God…and smothered in divinity…showered with deities, goddesses and myriad celestial beings with their fantastic myths and folklore…unconcerned with scientific methodology and framework.

The Final Transition—
Ram Dass counseled Leary’s family, after his friend’s death from prostate cancer in 1996. He reminded them to let their minds soar with his love, as he passed into the beyond, and to regard death just as highly as life…to let the mysteries of the universe, as they unfold, be beautiful. His last words were, “why?…why not?”