Albert Einstein: This private letter expresses views never meant for public consumption by of one of the most prolific minds of modern times on the subjects of God, religion and tribalism. 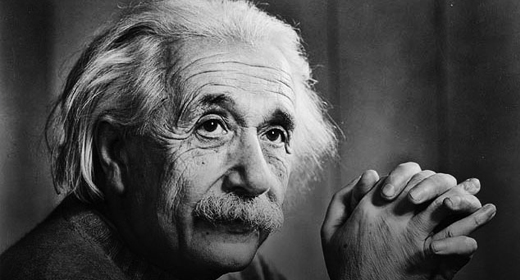 Few people have had access to the thoughts and uncensored opinions of this brilliant mind as it relates to his personal views on God and religion. The personal nature of the letter and the timing of it in Albert Einstein’s life adds to the implication of the certainty with which he wrote it. The sureness of his script and the methodical nature with which he chose his words lend to the documents weight. The ideas expressed are the culmination of a lifetime of work exploring the most principle questions of existence. If there were a guide for seekers of answers, this letter would be the introduction.

The auction is for the original, handwritten, in German, letter and envelope, sent on Princeton University letterhead, to Eric B. Gutkind, on January 3, 1954, a year before Einstein passed away, sent as response to Gutkind’s book “Choose Life: The Biblical Call to Revolt”.

Key Passages:
… I read a great deal in the last days of your book, and thank you very much for sending it to me. What especially struck me about it was this. With regard to the factual attitude to life and to the human community we have a great deal in common.

… The word God is for me nothing more than the expression and product of human weaknesses, the Bible a collection of honorable, but still primitive legends which are nevertheless pretty childish. No interpretation no matter how subtle can (for me) change this. These subtilised interpretations are highly manifold according to their nature and have almost nothing to do with the original text. For me the Jewish religion like all other religions is an incarnation of the most childish superstitions. And the Jewish people to whom I gladly belong and with whose mentality I have a deep affinity have no different quality for me than all other people. As far as my experience goes, they are also no better than other human groups, although they are protected from the worst cancers by a lack of power. Otherwise I cannot see anything ‘chosen’ about them.

In general I find it painful that you claim a privileged position and try to defend it by two walls of pride, an external one as a man and an internal one as a Jew. As a man you claim, so to speak, a dispensation from causality otherwise accepted, as a Jew the privilege of monotheism. But a limited causality is no longer a causality at all, as our wonderful Spinoza recognized with all incision, probably as the first one. And the animistic interpretations of the religions of nature are in principle not annulled by monopolization. With such walls we can only attain a certain self-deception, but our moral efforts are not furthered by them. On the contrary.

Now that I have quite openly stated our differences in intellectual convictions it is still clear to me that we are quite close to each other in essential things, i.e; in our evaluations of human behavior. What separates us are only intellectual ‘props’ and ‘rationalization’ in Freud’s language. Therefore I think that we would understand each other quite well if we talked about concrete things.

With friendly thanks and best wishes,
Yours, A. Einstein

The translation above is an abridgment of the letter from Albert Einstein to Eric Gutkind from Princeton in January 1954, translated from German by Joan Stambaugh.

Since its purchase, the letter has been stored at a professional academic institution which specializes in the care of cultural heritage collections. The item is stored in a temperature, humidity and light controlled environment. The authenticity of the letter has never been questioned, as it has been well known in the scientific community for over 50 years. This is further enhanced by the original envelope, stamp, and postmark. The auction will commence at the opening bid of $3 million US dollars.

For more information on the letter or for interviews, please contact Eric Gazin, President of Auction Cause, the agency managing the sale, at (323) 655-0554 or via email at einsteinletter@auctioncause.com.