by Shelly Fan: Earlier this month, the FDA approved an entirely new family of drugs, one so powerful that it could put CRISPR-based gene therapy to shame… 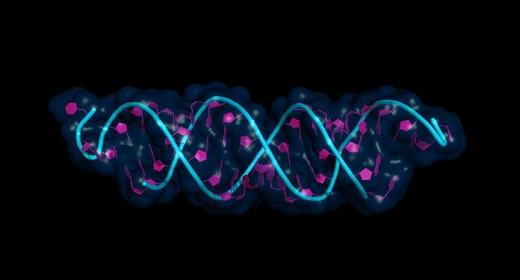 Backed by two decades of research and a Nobel Prize, these drugs have the ability to cure inherited diseases—and do so without actually needing to edit the delicate genome.

The green-lit therapy is patisiran, a drug ten years in the making by the Cambridge-based Alnylam for genetic nerve damage. But in this rare case, the nature of the drug is perhaps more significant: patisiran is based on a technology called RNA interference, or RNAi, which allows doctors to silence genes that aren’t properly functioning.

Patisiran is just the tip of the iceberg. In theory, RNAi has the potential to cure any disease caused by “bad” proteins, such as stroke, Alzheimer’s, high cholesterol, or other neurodegenerative disorders. The potential is so grand that scientists have long dubbed the technology a way to “drug the undruggable.”

“This approval is part of a broader wave of advances that allow us to treat disease by actually targeting the root cause, enabling us to arrest or reverse a condition, rather than only being able to slow its progression or treat its symptoms,” said FDA commissioner Scott Gottlieb in a press release. “New technologies like RNA inhibitors, that alter the genetic drivers of a disease, have the potential to transform medicine, so we can better confront and even cure debilitating illnesses.”

With other RNA-based therapies hurtling down the drug development pipeline, it’s likely we’ll be seeing more of these drugs soon. Here’s what you need to know.

What Is RNAi and Why Is It So Powerful?

You might remember from biology class that DNA works its magic by turning into proteins. This doesn’t happen directly. Rather, our genetic material relies on RNA to shuttle its information over to the necessary cellular factories that make proteins.

RNAi works by shooting the messenger: hijack, silence, or destroy the carrier, then the message gets erased. To scientists this is a particularly attractive way to treat inherited diseases.

A straightforward approach to dealing with bad genes is trying to replace a mutated gene with a healthy copy using gene therapy. This often involves cutting the genetic material and pasting new data into the new blank space. But the cut is not always specific, and there comes the risk: by tinkering with the code of life, we could inadvertently change other genes, destroying healthy ones or activating genes that could cause cancer.

By acting from a distance, RNAi avoids that risk. The mutated gene—and the genome itself—can be left alone. It doesn’t matter what the code is—if it can’t be compiled, then no running program. No RNA, no bad proteins, no disease.

This rule also applies to non-inherited diseases. During a stroke, for example, a slew of proteins come to life that together order brain cells to die. RNAi can shut down that process, and in turn save precious brain tissue.

There are more perks. RNAi is reversible. Biology is a complicated beast, and proteins that normally do good can, under certain disease situations, turn bad. The idea then isn’t to erase that protein entirely—which gene therapy does—but silence it temporarily. When the body goes back into a healthy state, scientists can then stop the treatment, allowing “black hat” proteins to return to their white hats and perform their normal tasks.

Why the Long Wait?

The simple answer? Delivery and safety.

RNAi was first discovered in 1998. Since then, scientists have rapidly adopted the technology to silence various genes (myself included) to suss out their functions. Making a strand of DNA-like material to interfere with RNA is the easy part. The problem is getting the precious therapy to the tissue in question without it getting chopped up.

Similar to DNA, RNA is made up of genetic letters, or nucleotides—A, C, G, and U in this case. RNAi works by adding a small snippet of synthetically-made nucleotides into the body, where it homes to the disease-causing RNA in question like a missile and destroys the target.

In practice, it’s a different story. The synthetic snippets, once inside the body, are almost instantly attacked by the body’s defense system. Scientists have tried wrapping the therapy in soap-like nanoparticles, but these tiny biological spaceships often end up stuck in the liver.

Getting RNAi treatments into the brain, or heart, or lungs, for example, is the major hurdle in pushing the technology to market.

Back in the late 2000s, the combination of these two stumbling blocks caused major drug giants—Merck, Pfizer, Roche, and Novartis—to abandon the RNAi ship. The period was so bleak that Alnylam refers to it as the “dark ages.”

How Did Patisiran Succeed?

The new drug, patisiran, circumvents the delivery problem by targeting the liver. As Arrakis Therapeutics CEO Michael Gilman commented on Twitter, “What finally got RNAi to the finish line was not so much technical challenges as it was realizing, and then accepting, that where it really works is in the liver—the killer app.”

Patisiran will be delivered to patients through an infusion. Protected by nanoparticles, the therapy will grab onto RNA strands that lead to a rare disease called hereditary transthyretin-mediated amyloidosis (hATTR). The disease, among other symptoms, causes severe nerve damage in the body and affects roughly 50,000 people worldwide.

Although patisiran will be the first cure for the inherited disease, the FDA’s green light is somewhat limited. The drug is only approved for nerve damage, but not other symptoms of the disease, such as heart problems.

Alnylam is hoping to work with the FDA to further broaden patisiran’s uses. As of now, the drug has the six-figure list price of $450,000 a year. While sky-high, the price is in the range of new therapies such as CAR-T for blood cancers.

Nevertheless, the broader field of RNAi has a lot to look forward to. Alnylam itself has other RNAi-based candidate therapies that aim to treat high cholesterol, bleeding disorders, and Parkinson’s disease. (A quick search on Clinicaltrials.gov confirms the company’s role as the leading RNAi-developer.)

How far the field can go remains a thorny question. Without tackling the problem of safety and delivery, RNAi-based therapies may be limited to the liver and kidneys and never realize their full potential.

But Alnylam’s success may once again spruce up the beleaguered field. Scientists are working on tagging the treatments with little Velcro-like proteins that help the therapeutic molecules grab onto various tissues. Alnylam may have a candidate that drags RNAi therapeutics into the brain. Speaking with STAT Plus, the company’s CEO hinted at announcing a third target tissue later this year.

RNAi may have more stumbling blocks. But with its historic win, it’s definitely time to put the powerful technology (back) on your map.