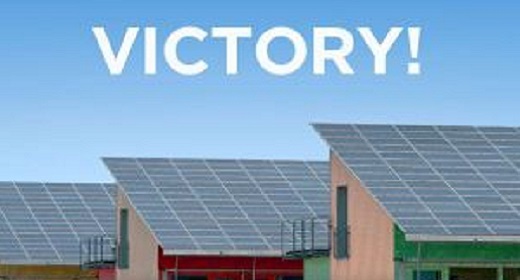 to approve a 100-megawatt solar feed-in-tariff, which will triple solar generation through the Long Island Clean Solar Initiative program.

“The Clean Solar Initiative and residential solar programs have made Long Island a leader in solar power and reduced our dependence on dirty fossil fuels that pollute our air and make people sick,” said Sierra Club Organizing Representative David Alicea. A feed-in-tariff lets people who go solar get paid for generated energy that feeds back into the grid, providing incentive for homeowners and business to adopt clean energy. LIPA’s approval came with an additional promise to purchase 280 megawatts of renewable energy.

The Sierra Club’s Beyond Coal Campaign in New York played a big role in securing this clean-energy commitment. In September 2012, Beyond Coal organizers launched the “Let’s Turn, Not Burn” campaign with local partners and the Long Island Sierra Club group, with the specific goal of pushing LIPA and Governor Cuomo to consider offshore wind energy.

While the campaign fell short of a 750-to-900-megawatt offshore wind proposal, the solar feed-in-tariff, a fuel-cell and wind feed-in-tariff, and the 280-megawatt commitment did get the green light last year. However, after Superstorm Sandy plowed through the region, politics threatened to undo the commitment. But the campaign, coalition, and allies were successful in pressuring the governor and legislators in Albany to hold firm on the commitment. “And we won,” said Dix.

“We see the renewable energy procurement as the prime opportunity to get the Empire State to finally commit to clean-renewable offshore wind power. It’s a sad fact that New York lags behind on renewable energy, an area where it should be leading. This year we will push to double down on wind energy to meet the state’s renewable energy targets.”

To that end, LIPA’s decision marks an exciting development, especially as the anniversary of Superstorm Sandy approaches. The campaign worked with Citizens Campaign for the Environment, Renewable Energy Long Island, the National Wildlife Federation, and others to keep the agency committed to clean energy.