Though there are no leaves on the trees yet, my home state of Massachusetts became a greener place to live this week… 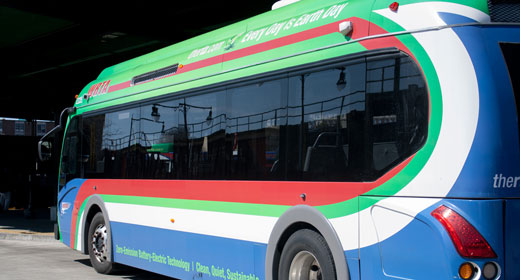 Governor Deval Patrick announced Thursday a rebate program that will provide state residents who purchase or lease an electric vehicle (EV) a rebate of up to $2,500 – an incentive that we in the Massachusetts Electric Vehicles Taskforce enthusiastically recommended.

In the past, I’ve blogged about Massachusetts lagging behind other states, like Oregon and Georgia, in EV incentives and sales. The new rebate program, expected to go into effect early this summer, will allow for catch-up and help clear the air from Cape Cod to the Berkshires.

On Thursday, the governor also celebrated the launch of six new fully electric public transit buses in Worcester, MA. “This is wicked cool,” said Governor Patrick (that means “really, really great” for you non-New Englanders). State transportation officials said each of the new buses is expected to eliminate 130 tons of carbon dioxide emissions per year compared to diesel buses and will cut operating costs by nearly $3 million over 12 years. The buses are manufactured by Proterra, headquartered in Greenville, SC. The growing company has e-bus contracts with transit agencies in a number of other cities, including Nashville, San Antonio, and Tallahassee.

The governor was on a roll because he also announced nearly $600,000 in Massachusetts Electric Vehicle Incentive Program (MassEVIP) grants for 16 municipalities, two universities, and one state agency to install EV charging stations and acquire about 200 EVs for their fleets. This is the second round of grant awards through MassEVIP since its launch last year. As a parent whose children take the school bus every day, I’m also excited to learn that, working in partnership with the Clinton Global Initiative, the Massachusetts Department of Energy Resources will provide $1.8 million in grants for eight electric school buses. These e-buses will have vehicle-to-grid capability to serve as back-up energy resources during natural disasters. It would be exciting if my daughters could ride on one of these clean driving technological marvels in our home city of Cambridge.

Massachusetts, which has signed an eight-state agreement to significantly ramp up EV programs and sales, has a long way to go to reach its commitment of getting 300,000+ plug-in vehicles on the road in Massachusetts alone by 2025. But this week, there was a jolt of real progress.