By Susan Harrow: During the first Japanese tea ceremony Sachiko Knappman conducted, she prepared tea and served it to her guest when Sachiko herself was ready. 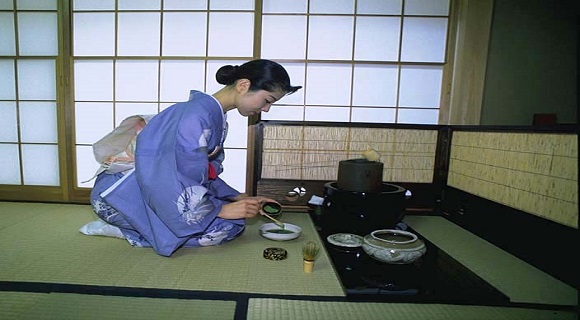 After much training, she realized that the person she was preparing it for also needed to be ready and open to receive the tea. The practice of Chado, or tea ceremony, took observation, timing, sensitivity and grace — all of which she learned later.

Usually this centuries old Japanese ritual involves the guest watching the performance of the preparation and presentation of the tea, then eating traditional Japanese confections to enhance the taste of tea. After consuming the sweets the guest drinks green tea. The untrained person makes the tea according to her own schedule, but part of the elegance and beauty of this ritual is similar to a dance between two people who are deeply connected and moving together while maintaining their individuality.

In Aikido the inexperienced practitioner often drags his uke (attacker) along in his unskilled effort to throw him. In contrast the experienced Aikidoist harmonizes or blends his energy in order to guide his uke to where both the uke and the nage (thrower) wants to go. It’s about uke and nage aligning their bodies, mind, energy. Instead of doing something “to” someone you’re doing it “with” them. This comes with much practice, body to body.

Ginny Breeland, who has been practicing Aikido for over 30 years and is a fifth dan, says that the first step to becoming a skilled practitioner in Aikido or tea ceremony is to observe ourselves when we train. She advises that we notice how we react, what we need to change. “If you do that you don’t judge yourself — you just see it,” she says. “Instead of coming to conclusions before we know the actual story, just observe.” 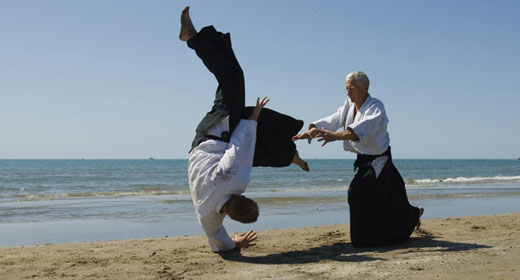 While these two processes develop a person’s sensitivity, capabilities and strengths, many people will recognize that DO or “The Way” doesn’t have a direct translation/path journey. “It’s a nameless process that happens that leads you to wellness and growth,” says Breeland. They are both a type of mindfulness practice that begin to change the shape of your thoughts and actions over time.

Both paths are similar but different. Tea ceremony and Aikido can both be considered meditation in action, practices that emphasize stillness through movement. They require commitment and sometimes the work is arduous. “Not like a hobby,” says Breeland. But everything from finishing a book or a piece of art can be martial, she explains. “All the masters in every martial art discipline say it’s about peace, non-confrontation and maintaining peace and respect. Tea is a mindfulness practice that has its origins in Zen. Underneath that practice is the subtle understanding that it’s not necessary to have so many materialistic things to have happiness. In Aikido the practice is to turn lead into gold. The founder Morihei Ueshiba says, “True victory is self-victory.”

“These practices are not about learning to be good. They are about finding the goodness in yourself,” explains Breeland. One way to do that is to try something that requires commitment so people learn about themselves. Both the tea ceremony and Aikido are two paths that can bring you there. It’s not about words and knowing, but about feeling. Aikido and tea aren’t about making you a better speaker, but a better listener.

“People are looking for wellness, and maybe they want to try it without a pill as there’s access to it in your own brain,” notes Breeland. “Look inside yourself first. Even if you don’t like what you see work with it and let’s see what we can do after that. As with any new learning you start with one good technique and put it in your pocket and slowly start to gather them.” This is part of the commitment to moving forward incrementally no matter what, using the tea ceremony, Aikido, or whatever you choose as the vehicle.