The Healing Power Of Mantra

by Azriel ReShel: The Sacred Medicine Of Sound… 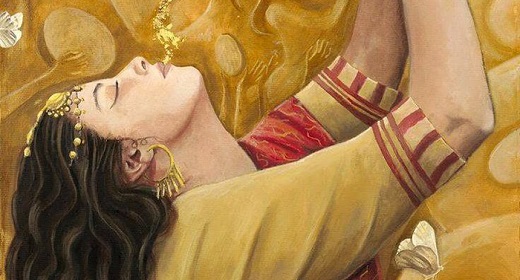 Sound is sacred. Sound is powerful. It connects us, heals us and expands our hearts. Mantra chanting opens us up to sound on another level and has an enigmatic transformative power. It is an ancient key for unlocking the mysteries of the entire universe.

Mantra has been described as a sacred utterance, or numinous sound. The earliest mantras took birth in India over 3,000 years ago and were composed in Vedic Sanskrit. World-renowned musicians and chant masters, Deva Premal and Miten describe mantras as energetic sound formulas. According to them, mantras are a bridge to something that slows us down and puts everything into perspective. They believe that the way out of today’s troubles is to go within, so they travel the world sharing the medicine of mantra.

The mantras that we chant are in Sanskrit–a sacred language of ancient India that is no longer spoken. The mantras were created by the rishis (wise ones) as paths to awareness, using the power of particular sounds to create specific energy responses.

Chanting mantras has the power to transform mind, body and spirit. Kurshed Batliwala, author, speaker and senior teacher with the Art of Living Foundation, says the technical definition of mantra means ‘that which uplifts the mind.’ He says mantra affects our inner consciousness and our physical body, and creates a state of connection and joy:

It’s something very beautiful, the mantra is basically sound. There are five elements, earth, water, fire, air and space. Mantra comes in space. The other four elements are associated with the senses. All the other elements are encompassed in space. So mantra is something that can affect and perhaps actually control all the elements. Mantra can actually even control and affect your body and mind. That is what is really fascinating about mantras.

Punnu Wasu Singh has been singing kirtan with his father since the age of five and he has travelled all over the world singing throughout his teens and now as an adult. Over the years, he has a special connection with sacred sound:

Mantra is divided into two words; ‘man’ or mind and ‘tra’ the technique that quietens the mind. Mantras have a special technique to quieten the mind. As we chant, the frequencies of the mantra go into the being and quieten the mind…If we are in depression, anxiety, anger, frustration, or disappointment and we listen to or chant a mantra, it brings us to sat chit ananda or consciousness in bliss.

He says that all mantras come from one mantra, and that is Om. When we chant Om we are invoking that universal intelligence and energy to come and be with us:

Every organ in the body has a frequency, a sound. When we chant the mantra there is a neurobiological shift which happens in the physical brain. And the cells rejoice, they get happier.

Mantras have a special technique to quieten the mind. – Punnu Wasu Sing

Singer, songwriter, instrumentalist, and lover of mantra, Tina Malia, was introduced to mantra at age 17 when she was hired to be one of world-renowned chant artist, Jai Uttal’s backing singers. With no background in mantra, when she first heard and sang the sacred Sanskrit sounds she felt something calling her deeply. Tina recounts the profound impact mantra has had on her life:

I was going through this dark period in my life and I had been suffering depression really since I was a child… My life was amazing and I had everything but I felt really empty inside… I was in my early 20s and was kind of sinking deeper and deeper into this dark hole… and finding less reason to be here. One day Jai came to my door and he had this beautiful mala and he asked me if I’d ever tried japa chanting, an internal repetition of mantra. He said ‘maybe it’s something you could try’. So with nothing to lose and nothing left to try I started doing this japa mantra.

Tina shares how initially her body hurt but little by little by reciting this mantra she started to notice her mind was not as focused on some of the issues causing her suffering:

After a few weeks of reciting this mantra all the time, and I was very dedicated, a life-changing moment happened in my life. This little speck of light appeared in my heart. And it was just this feeling of delight. It was the first time I’d felt delight in a long time… So I started focusing on this speck of light, joy and with more fervour reciting this mantra to this place in my heart. And as weeks, days and months went by this little space started to grow and I could actually feel it growing physically within me. And it grew and then at some point this feeling of joy and delight, home and belonging, everything that I was looking for, had wanted and couldn’t find, was coming from inside of me. And then finally it grew beyond my body and I felt it reaching out. And I’ve been quite a devotee to this mantra and practice since then. It’s continuously with me.

All mantras come from one mantra, and that is Om.

Tina believes there’s a lack of presence in Western culture. Most times we are not truly present, experiencing and feeling what is happening for us. Mantra has a sacred power that can bring us into direct contact with presence:

When you’re reciting a mantra, for me there are two things happening. One, I’m intentionally focusing on something beautiful. So I’m creating beauty and two, there’s a silencing of the mind. Your mind is focused on the mantra and all these other things have stopped. So you’ve allowed this space of silence to experience this thing of beauty you’re creating.

The Meeting of Science and Mantra

Today, all over the world, people are waking up to the power of mantra. With the massive growth in yoga in the West, and its healing wisdom, including mantra, many people are embracing mantra chanting, kirtan and meditation.

Yoga means union and all the branches of yoga, are making you one complete unit, making you feel your body and mind are part of the creation. So you feel you are not the wave but the ocean. When you chant with reverence and feeling you will feel an expansion within you. You feel that maybe there is more to me than I ever thought, and that’s yoga. – Kurshed Batliwala

Mantra has a sacred power that can bring us into direct contact with presence.

The ancient mantras are needed today more than ever in our busy, stressful lives, and are bringing healing, a sense of belonging, oneness and community to people all over the world.

India was the only culture ever where science and religion didn’t have a problem with each other, because all our scientists were saints. They all used to meditate and were scientists… The technology they downloaded from space was outstanding. Now today through sages, knowledge is being revived and is coming back for the whole world. – Kurshed Batliwala

Mantra chanting is a sacred and beautiful practice. It can be done alone or in groups. “You don’t have to be Pavarotti,” says Miten. “Anyone can sing mantra.”

Mantra can be easily learnt, and singing along to a favourite mantra track is a good way to learn the correct pronunciation and to familiarise yourself with a particular mantra.

You don’t have to be Pavarotti, anyone can sing mantra. – Miten.

Traditionally, mantras are chanted in cycles of 108 repetitions. According to the Vedic scriptures, our physical and subtle bodies contain 108 major nadis, or energy channels. When we chant a mantra 108 times, that sound vibration can fill all of the energy lines in our bodies and balance them. – Deva Premal and Miten

Deva Premal and Miten suggest starting with Om and using this mantra on your out breathas you fall asleep, so you rest in the sacred sound of Om. They also provide 21-day mantra courses.

Awakening the power of mantra in your life is as simple as committing to a daily practice, or finding one mantra you feel connected to and learning this mantra.

Mantra is very connected to feeling and reverence. There needs to be a feeling to it. Only then does the shakti of the mantra get released. Otherwise it doesn’t work. When you say it with feeling then the power in the mantra is unleashed. – Kurshed Batliwala