The Practice Of Beginner’s Mind

by Dr. Alberto Villoldo: The Practice of Beginner’s Mind is the first of four practices in The Way of the Seer… 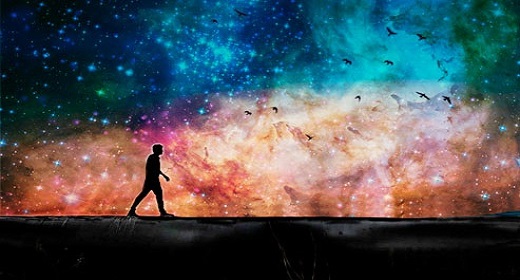 Practicing beginner’s mind requires us to let go of our preconceived notions. Our lives become much simpler when we aren’t weighed down by the baggage of our stories and expectations. The Laika say that this is when we are able to walk in the snow without leaving tracks. We stop being jaded, and instead open ourselves up to the opportunities presented to us. Innocence and spontaneity infuse our lives again, and we lose the attitude of “been there, done that.” Not that we forget our years of experience―we simply don’t confuse what we learned yesterday with what we’re discovering today.

We have to say to ourselves, “This is what I believe might be true, but let me test it out against reality.” We develop a hypothetical relationship with life instead of a fixed one. Then if we encounter a situation we’ve been in before, we don’t assume the outcome, because when we do, it becomes a self-fulfilling prophecy. We say, “This looks like an argument with my spouse. In fact, it seems to be the same one about money that we get into all the time. But maybe it isn’t―maybe it’s something else.”

Suddenly, we find that we’re not in a marital spat; rather, we’re being presented with the chance to see a situation from our spouse’s point of view. Instead of hearing, “You should go back to that job you hate because you’re not carrying your half of the load,” we hear, “I’m scared.” We notice this as an opportunity to offer our support and find a way to reconnect in a loving way, further cementing our relationship.

Practicing beginner’s mind has a lot in common with scientific theory. In science, we form a hypothesis based on what we’ve observed, and then we test it against the facts. If the evidence doesn’t fit the theory, we throw out the hypothesis. This is very different from religion, in which the hypothesis is considered holy. In religion, we test out our hypothesis against the facts, and if the facts don’t fit, we keep the theory and throw out any contradictory evidence. This is why overwhelming scientific data of human evolution over millions of years doesn’t change the thinking of a fundamentalist who believes that God created the world in six days, and that dinosaurs lived in harmony with Adam and Eve in the Garden of Eden.

Practicing beginner’s mind requires us to give up our dogma, whatever it is. Of course, this is easier said than done when that dogma seems to have served us well. And while we think of religion as being rigid, science can become rigidly ideological as well, as if it were a body of knowledge instead of a way of acquiring knowledge. In the early days of my research, for instance, I found that many scientists rejected out of hand the research that I was doing because it didn’t fit into the assumptions they held. Then as quantum physics and chaos theory became more popularly accepted, my work became increasingly recognized by scientists and physicians. The dogma of science is that we often resist asking bigger questions that might result in enormous strides in our ability to heal ourselves and the planet.

There’s great danger in collapsing truths into beliefs that limit us, because we’ll always be taken by surprise in the future. We know that the cutting edge of medical treatment 20 years ago is outdated today, for instance, and that the discoveries of avant-garde physicists that were accepted by the previous generation have been proven erroneous. Our challenge is to move beyond our sense that there’s only what is true and what is not true, and that there’s only real and unreal, with nothing in between. Strict beliefs about what can and can’t be done prevent us from dreaming the world we desire.

We can return to a more creative, open, childlike way of being by making simple changes in our routines and habits, such as eating with the opposite hand, taking a different route home, and smiling instead of fuming when we’re upset. We can shatter our complicity with the mediocrity around us and open ourselves up to a much wider range of possibilities. The following exercise will help you open yourself up to the new by getting rid of what’s not working for you.

Exercise: Clear the Junk Out of Your Life

To practice beginner’s mind, you must first clear the debris out of your life. At the level of serpent this means emptying your closets of all the junk and collectibles you know you don’t need but have been reluctant to get rid of. This clutter keeps you tied to the past―that stuffed animal you won at the county fair, that college sweatshirt you’ve outgrown, and so on. You’ll still remember the pleasures of those experiences, but without the tangible symbols that are stuffing your closets.

Throw away that lava lamp which represents the lifestyle you thought you were supposed to have back in your bachelor years. Let go of the books you feel you really ought to read someday and the craft projects you feel compelled to complete even though you’ve lost interest in them. Allow yourself to release the expectations you had of yourself and accept that you’ve made different choices.

Clear out your attic, your basement, and your overloaded shelves and CD racks. Let go of the belief that you have to continue to possess any object that might be “worth something.” Give it to the less fortunate, rather than clinging to the illusion that the more objects you possess, the more security and prosperity you have.

At the level of jaguar, we practice beginner’s mind by chucking limiting beliefs about scarcity, abundance, intimacy, and self-worth. Ultimately, we realize that every belief is limiting, and we toss them all into the recycling bin. We then develop a hypothetical relationship with the world, testing every notion we have for its usefulness. We understand that “believing is seeing,” and that the universe will validate every belief we hold about the nature of reality.

At the level of the sacred, beginner’s mind means not identifying with our thoughts. From the perspective of hummingbird, we understand that every thought is an affirmation that reinforces an unconscious mental model about the nature of reality. When we stop identifying with our thoughts, the ego dissolves, because it stems from the belief that I think, therefore I am. We need to take every single belief we have about the nature of our reality and fling it in the fire. After they’ve been incinerated, we’re free to reinvent ourselves and our world. And then, from the perspective of eagle, the amateur within us finds the true beloved―Spirit.