by Abraham Loeb: Our discipline is a dialogue with nature, not a monologue, as some theorists would prefer to believe… 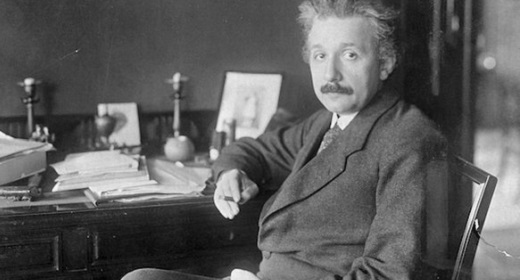 A new debate has recently emerged as to whether string theory admits even a single rigorous solution that includes a cosmological constant, as we find observationally in the real universe. The debate follows on a period of several decades during which the mathematical richness of the theory has been advanced considerably but with very limited connection to experimental testing. This experience inspired a new culture of doing theoretical physics without the need for experimental verification.

Given our academic reward system of grades, promotions and prizes, we sometimes forget that physics is a learning experience about nature rather than an arena for demonstrating our intellectual power. As students of experience, we should be allowed to make mistakes and correct our prejudices.

Albert Einstein is admired for pioneering the use of thought experiments as a tool for unraveling the truth about the physical reality. But we should keep in mind that he was wrong about the fundamental nature of quantum mechanics as well as the existence of gravitational waves and black holes—which he dismissed late in his career, and which were both confirmed observationally by LIGO in 2015, exactly a century after he formulated the general theory of relativity.

Given this humbling historical lesson, theoretical physicists should be careful of premature hubris in celebrating conjectures and accept the final verdict of experimental guillotines in setting the fate of untested speculations.

The feedback from experimental data is essential. At its foundation, physics is a dialogue with nature, not a monologue as some theorists would prefer to believe. On my daily route to work, I am often reminded of the need for empirical verification by the sight of the beautiful housepurchased by Charles Ponzi in 1920, just months before his arrest for the fraudulent investment operations now commonly associated with his last name.

Ponzi made his fortune by promising investors guaranteed revenues, a desirable theoretical scheme that was socially acceptable until it was brought to an experimental test by the investors asking to cash out their funds. Their shock at the time signified the need for testing theoretical schemes before giving them the stamp of approval as descriptions of reality.

Similar to the way physicians are obliged to take the Hippocratic Oath, physicists should take a “Galilean Oath,” in which they agree to gauge the value of theoretical conjectures in physics based on how well they are tested by experiments within their lifetime.

The risk for physics stems primarily from mathematically beautiful “truths,” such as string theory, accepted prematurely for decades as a description of reality just because of their elegance. This is a judgement often guided by a social trend within physics to feed off mathematical sophistication and prestige. It is widely accepted today that the study of extra dimensions is part of the mainstream in theoretical physics even though there is no evidence for any extra dimension beyond the 3+1 we witness in our daily life.

At the same time, many of the same scientists that consider the study of extra dimensions as mainstream regard the search for extraterrestrial intelligence (SETI) as speculative. This mindset fails to recognize that SETI merely involves searching elsewhere for something we already know exists on Earth, and by the knowledge that a quarter of all stars host a potentially habitable Earth-size planet around them.

This search should be considered well within the boundaries of mainstream research, whereas the conjecture of extra dimensions should be regarded as highly speculative.

The experience of subjecting a theoretical conjecture to an experimental test is humbling. If the conjecture turns out to be wrong, it must be adjusted. Becoming a physicist brings with it the privilege of retaining your childhood curiosity throughout your adult life. There is no need to pretend you know more than you actually do, and you can admit mistakes if proven wrong by experience, just like a child who is seeking to learn about the world. Doing pure theory without worrying about experimental verification actually deprives one from the pleasure of learning something new about nature.

Identifying the boundaries of our knowledge is more exciting than taking pride in past knowledge. And only our contact with reality itself through experimentation can direct our notions into new realms. No one, not even Einstein, would have imagined quantum mechanics without the experimental data that led us to this unexpected notion of reality.