by Alison Nastasi: The icons we admire in the pop culture sphere are often quiet about their religious and spiritual lives… 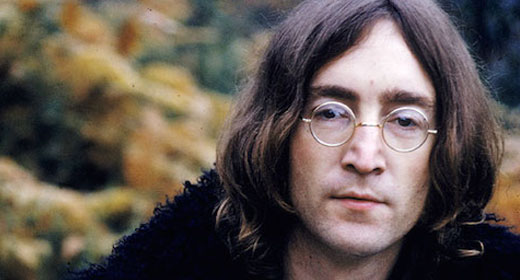 determined to keep one piece of themselves away from prying eyes. But every now and then, these cultural icons open up to us about their deepest beliefs. After learning about a lecture series on Buddhism by Jorge Luis Borges on Open Culture, we decided to get metaphysical. Here’s what our culture’s most talented and keen have to say about their inner lives — stances on the spiritual, religious views, and more.

“I believe in everything until it’s disproved. So I believe in fairies, the myths, dragons. It all exists, even if it’s in your mind. Who’s to say that dreams and nightmares aren’t as real as the here and now?” —John Lennon

“I believe in God, but not as one thing, not as an old man in the sky. I believe that what people call God is something in all of us. I believe that what Jesus and Mohammed and Buddha and all the rest said was right. It’s just that the translations have gone wrong.” —John Lennon

“The possession of knowledge does not kill the sense of wonder and mystery. There is always more mystery.” —Anaïs Nin

“The further the spiritual evolution of mankind advances, the more certain it seems to me that the path to genuine religiosity does not lie through the fear of life, and the fear of death, and blind faith, but through striving after rational knowledge.” —Albert Einstein

“Jane [Russell] tried to convert me [to religion], and I tried to introduce her to Freud.” —Marilyn Monroe

“I thought about becoming a minister, not because I was a religious person, other than having an inexaustible awe and reverence for nature, but because I thought it might give me more of a purpose in life. I flirted with the idea for a while, but in the end it never developed sufficient force to make me want to do it . . . I became a roving ambassador for the agency, preaching a different kind of religion: that above all, the world owes its children a decent life.” —Marlon Brando

“The juice goes out of Christianity when it becomes too based on faith rather than on living like Jesus or seeing the world as Jesus saw it. I think different religions are different doors to the same house. Sometimes I think the house exists, and sometimes I don’t. It’s the great mystery.” —Steve Jobs

“All I want is to know the truth, to know and experience God. I’m a searcher, that’s what I’m all about.” —Elvis

“Religion is like a blind man looking in a black room for a black cat that isn’t there, and finding it.” —Oscar Wilde

“I decided I needed to have a spiritual life. That’s when I discovered Kabbalah. They say that when the student is ready, the teacher appears, and I’m afraid that cliché applied to me as well. That was the next daring period of my life. In the beginning I sat at the back of the classroom. I was usually the only female. Everyone looked very serious. Most of the men wore suits and kippahs. No one noticed me and no one seemed to care, and that suited me just fine. What the teacher was saying blew my mind. Resonated with me. Inspired me. We were talking about God and heaven and hell, but I didn’t feel like religious dogma was being shoved down my throat. I was learning about science and quantum physics. I was reading Aramaic. I was studying history. I was introduced to an ancient wisdom that I could apply to my life in a practical way. And for once, questions and debate were encouraged. This was my kind of place.” —Madonna

“I have enormous faith, but it’s not attached to any one in particular religion. . . . My mother was one thing, my father another. In Holland they were all Calvinists. That has no importance at all to me.” —Audrey Hepburn

“I was young, fancy free, and Tibetan Buddhism appealed to me at that time. I thought, ‘There’s salvation.’ It didn’t really work. Then I went through Nietzsche, Satanism, Christianity . . . pottery, and ended up singing. It’s been a long road.” —David Bowie

“I’m not quite an atheist and it worries me. There’s that little bit that holds on. Well, I’m almost an atheist. Give me a couple of months.” —David Bowie

“For those who believe in God, most of the big questions are answered. But for those of us who can’t readily accept the God formula, the big answers don’t remain stone-written. We adjust to new conditions and discoveries. We are pliable. Love need not be a command nor faith a dictum. I am my own god. We are here to unlearn the teachings of the church, state, and our educational system.” —Charles Bukowski

“I’m a polytheist: all present-day religions are recent, but I prefer the Greek and Roman mythology, which does without hell, without sin (an obstacle to happiness), and without forgiveness.” —Karl Lagerfeld

“I don’t really practice a religion, per se. Most religious folks I’ve met are jive. If I did follow any religion, It would be Islam. It’s the only religion that makes sense.” —Miles Davis

“I think there is definitely a God. I think there was definitely an angel with me all the way through the bad times. Somebody keeping me safe. I feel very spiritual now. I really believe that God makes my music good. . . . I mean, there has to be some outside help–this can’t all be happening on its own.” —Stevie Nicks

“Having a little bit of the spiritual is ultimately better than having none. . . . A long, long time ago I decided I was going to have a kind of mystical presence, so I made my clothes, my boots, my hair, and my whole being go with that. But it wasn’t something I just made up at that point. It’s the way I’ve always been. I’ve always believed in good witches — not bad witches — and fairies and angels.” —Stevie Nicks

“I don’t think that people accept the fact that life doesn’t make sense. I think it makes people terribly uncomfortable. It seems like religion and myth were invented against that, trying to make sense out of it.” —David Lynch

“I pray to God all the time. We have a conversational relationship and those conversations calm my fears.” —Elizabeth Taylor

“I would say that I’m religious, but in my way. I don’t go to church every Sunday, but I do talk to God a lot. I just do it in my own way. . . . I assimilate everything that makes sense and is logical to me in the spiritual realm. It doesn’t matter to me if something comes from a religion that I wasn’t brought up by. I’m all encompassing. I want to hear it all and then make my decisions after that.” —Joan Jett

“The whole thing is so patently infantile, so foreign to reality, that to anyone with a friendly attitude to humanity it is painful to think that the great majority of mortals will never be able to rise above this view of life.” —Sigmund Freud on religion