by Robert Thurman Ph.D: Literally meaning “saving the mind,” a mantra is a creative sound considered expressive of the deepest essence of things and understandings… 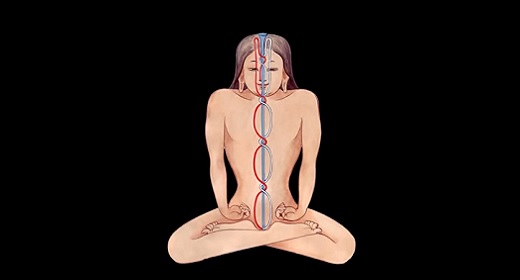 so its repetition can evoke in a formulaic or even magical way a state of enlightenment or positive energy.

Some mantras resemble sentences, and express some wish, vision, or affirmation, while others are just a single syllable or two, containing the germ of a deity, realm, or state of concentration.

A very simple type of daily life meditation is the common Tibetan practice of recitation of the mantra “OM MANI PADME HUM” the mantra of great compassion. Literally, “Om—The jewel in the lotus—hum,” for a Tibetan it means that all is well with the universe, the force of good and love is everywhere and competent to help all beings out of every difficulty. The mantra thus resonates with the most positive possible outlook.

Tibetans develop the ability constantly to repeat the mantra silently or in a low voice. They learn about the mantra and about Avalokiteshvara, the Lord of Compassion, feel close to his positive energy, and practice repeating the syllables in sessions of meditation. Thus abandoning a level of habitual mental rumination, they use that layer of the mental bandwidth for the stream of the mantra.

Some of them can combine it with a visualization in which they see the six jeweled syllables, on a turning wheel in the heart center, radiate the rainbow light rays of the five wisdoms to bless all beings throughout the universe. The stream of the mantra then connects with a constant vision of radiant color streaming forth and back in loving energies. Other mantras can also be used in the same way.

If the mantra is Jewish, Christian, or Moslem, you can use it to create the same kind of positive stream in your mind. Such a practice will be especially valuable in the death crisis. By learning to let it flow automatically, it will easily carry you over rough spots in the dying and between transitions.