Hair as a Sixth Sense

by Liz Leafloor: The Sensory power of hair… 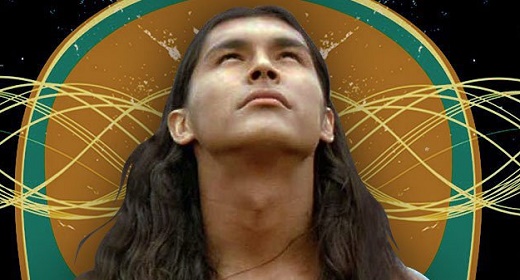 It is widely believed that long hair gave Native Americans certain sensory abilities, acting as a sort of antenna, much like whiskers on a cat.

One report speaks of a claim by a worker at a Veterans Affairs Medical Center in the United States during the Vietnam War. It is alleged that, like the Choctaw and Navajo Native Americans known as ‘Code Talkers’ during both World Wars, talented scouts were sought to move stealthily through rough and dangerous terrain in conflict zones.

The enlisted recruits, who were well documented as having “outstanding, almost supernatural tracking abilities” were said to not perform as expected in the field, and when questioned about the failures in performance, “ the older recruits replied consistently that when they received their required military haircuts, they could no longer ‘sense’ the enemy. They could no longer access a ‘sixth sense’, their ‘intuition’ no longer was reliable, they could not ‘read’ subtle signs as well or access subtle extrasensory information,” writes WakingTimes.com

The report claims that government testing institutes compared the behaviors and tracking performances of Native American trackers with and without long hair, they found that the long-haired subjects outperformed those whose hair had been cut in military fashion. The suggested theory was that the long hair might have behaved as an extension of the nervous system, as, not unlike the way cat whiskers transmit information to the cat on the prowl as it approaches prey, the long hair acted like a sixth sense.

Some skeptics challenge the claims, noting that no evidence has been found as yet to show that hair is anything more than dead cells (keratin proteins) and as such transmits nothing. However, strands stem out from our skin, and the follicle at the base is actually an organ that produces hair. Hair is connected to tactile receptors in the skin that tell us that it’s cold or hot out, let us feel the slightest breeze, or the annoying bug that is about to bite us, serving as a protective warning device.

When our hairs stand up on the back of our necks when we’re in danger or feel threatened (known as goose bumps, or horripilation), is that a reflex of something we detect with our other senses, an unconscious perception affecting the hair? Or is it our hair affecting us, sending us a warning?

Certainly there are societies that feel hair plays such an important role in our lives. The tale of the Native American trackers echoes the ancient biblical myth of Samson.

It was written in the Hebrew Bible that Samson, a Hercules-like figure with superhuman strength, was born a Nazirite with vows to abstain from wine, to have no contact with the dead, and to never cut a hair on his head. Nearly an undefeatable man—his superhuman abilities made him a powerful warrior, and he was able to rip lions apart—he did have a weakness which would lead to his undoing.

He fell in love with a woman (a Philistine, with whom the Israelites were at war) against the wishes of his parents. Delilah was tasked by her people to find out Samson’s weakness, so as to defeat the hero that was said to protect the Israelites.

Samson revealed to her that it is his long hair that preserved his power, and once he fell asleep Delilah shaved off his hair, breaking his vows. He awoke to find that his powers were gone, and he was quickly conquered by the enemy—his eyes were gouged out and he was made into a slave.

Symbolism and Folklore of Hair

Perhaps the Native Americans trackers in the account, with their strong connection to long hair, lost confidence in their ability to track after cutting their hair. In many tribes, long hair is a symbol, an extension of the self, and the physical manifestation of thoughts.

In many cultures, the cutting of hair by oppressors was a punishment or humiliation, signifying defeat. The shaving off or complete loss of one’s hair, even in modern society, often symbolizes a seismic shift within a person, whether spiritually, psychologically, medically, or in the direction of their lives.

Various tribal hair styles indicate which tribe one belonged to, and whether it was a time of war or peace. Different styles are used to demonstrate status and rank, or were worn for certain ceremonies.

There are many beliefs surrounding very long hair. Below is a portrait of Empress Elisabeth of Austria (1837 – 1898) with her long hair, which was perfumed and treated with egg and cognac. “Hairdressing takes almost two hours, she said, and while my hair is busy, my mind stays idle. I am afraid that my mind escapes through the hair and onto the fingers of my hairdresser. Hence my headache afterwards.”

Seeing Health and Magic in Hair

Health is often gauged by the condition of the hair, and illness or stress can be detected if it changes its nature or even falls out. Hair has always been an indicator of age as well, by colour and texture, as well as by style. Free, unbound hair often symbolises youth, and shorter, tied hair can symbolise a more mature demeanour. The tighter the binding, the more restricted or severe and powerful the impression given.

It was held by many societies that hair, whether styled or not, had magical qualities.

Various nations of Native Americans have similar beliefs about hair. The Cree people are said to hold hair as an extension of the soul, and the style displays personality. Bear fat and soot were sometimes mixed and applied to hair to make it appear darker. The Mohawk, Pawnee and Algonquin hairstyles are the inspiration for the dramatic haircut known as a Mohawk today, where the hair is shorn on the sides leaving a strip like a horse’s mane.

It is believed that mourning and death are reasons to cut one’s hair throughout many cultures.

Ancient hairstyles and their modern equivalents

What is our Hairstyle Communicating?

In the UK it is still said that eating bread crusts will turn your hair curly, and there are many old beliefs connecting red hair with mischief or a fiery temperament. In Scotland there’s an old saying that has it that if a magpie bird steals your cut hair and uses it for its nests will die within a year. This is similar to beliefs in Lithuania, that birds collecting your cut hair will cause headaches.

Buddhists have the tradition of keeping short hair, or shaving their heads completely, a signal that they belong in the spiritual community. In contrast, many cultures men and women grow their hair long, or, like Samson, are even forbidden to cut it, but keep it covered due to religious observations.

It is not known for sure if the hair is communicating to us as part of our nervous system, but what is certain is that how we’ve worn our hair has always communicated something to others.