A potentially “immortal” jellyfish species that can age backward—theBenjamin Button of the deep—is silently invading the world’s oceans, swarm by swarm, a recent study says. 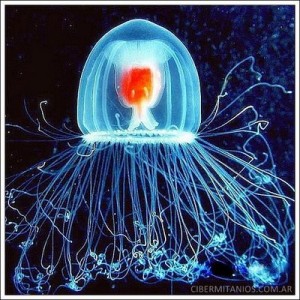 Like the Brad Pitt movie character, the immortal jellyfish transforms from an adult back into a baby, but with an added bonus: Unlike Benjamin Button, the jellyfish can do it over and over again—though apparently only as an emergency measure.

About as wide as a human pinky nail when fully grown, the immortal jellyfish (scientific name: Turritopsis dohrnii) was discovered in the Mediterranean Sea in 1883. But its unique ability was not discovered until the 1990s.

How the Jellyfish Becomes “Immortal”

But when starvation, physical damage, or other crises arise, “instead of sure death,[Turritopsis] transforms all of its existing cells into a younger state,” said study author Maria Pia Miglietta, a researcher at Pennsylvania State University.

The jellyfish turns itself into a bloblike cyst, which then develops into a polyp colony, essentially the first stage in jellyfish life.

The jellyfish’s cells are often completely transformed in the process. Muscle cells can become nerve cells or even sperm or eggs.

Through asexual reproduction, the resulting polyp colony can spawn hundreds of genetically identical jellyfish—near perfect copies of the original adult.

This unique approach to hardship may be helping Turritopsis swarms spread throughout the world’s oceans, she added.

Miglietta and her colleague Harilaos Lessios of the Smithsonian Tropical Research Institute in Panama compared the DNA of immortal jellyfish from waters off Spain, Italy, Japan, Florida, Panama, and elsewhere for their study, published in the June 2008 issue of the journal Biological Invasions.

The pair was surprised to discover that, even though the specimens came from all over the globe, all the genes the scientists looked at were identical.

There’s no way genetically identical jellyfish swarms could have ended up in so many far-flung places simply by riding ocean currents, Milietta said.

Miglietta suspects the jellyfish are hitching rides inside long-distance cargo ships. The creatures are likely traveling in the ship’s ballast water—water sucked into and pumped out of ships to provide stability. Meanwhile, polyps could be attaching to the hulls.

For reasons still mysterious, the immortal jellyfish takes on slightly different forms as it spreads. Swarms living in tropical waters typically have only 8 tentacles, while those in temperate regions can have 24 or more tentacles.

“One of the most interesting things about the study is the fact that this widespread invasion was previously unnoticed,” said biologist John Darling of the U.S. Environmental Protection Agency.

“Often we simply don’t recognize when things have been introduced because they’re inconspicuous or we don’t have the expertise to recognize them as something new. Maria’s work, along with others’, show how genetic studies can help to resolve this problem,” said Darling, who was not involved in the recent research.

James Carlton, a marine scientist at Williams College in Massachusetts, saidTurritopsis is part of a “growing fleet” of unrecognized, invasive invertebrates.

The discovery underscores “our remarkable underestimation of the extent to which the ocean has been reorganized,” said Carlton, who also was not involved in the research.

What impact the jellyfish are having on their new ecosystems is still unknown and requires further study, Miglietta said.

Another mystery is how the jellyfish achieve their remarkable age reversal. Miglietta speculates that the creatures have very effective cellular repair mechanisms that allow them to age without incurring the usual ravages of time.

Miglietta dismissed news reports from this week that implied the jellyfish could hold a key to anti-aging drugs for humans.

“Nobody is looking into that,” she said, “and I don’t think you’re going to find any secrets in these creatures.”

But while they won’t yield the next Botox, the jellyfish just might help fight one of human health’s greatest threats—cancer—according to biologist Stefano Piraino of the University of Salento in Italy.

Like cancer cells, “some cells of this jellyfish that were supposed to [die] … are able to switch off some genes and to switch on some other genes, reactivating genetic programs that were used in earlier stages of the life cycle,” Piraino said.

By studying how exactly the immortal jellyfish’s cells do that, he said, scientists may find clues for the struggle against that other silent, rapidly expanding invader.