One of the greenest cities of India, known for its serene landscapes along the waves of the Bay of Bengal, was ripped apart by  the violent cyclone called Hudhud. 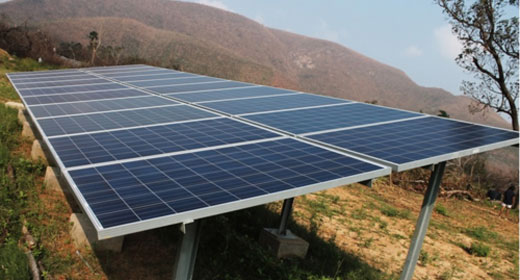 Visakhapatnam, a peaceful coastal city in Andhra Pradesh located on the eastern coast of India between the sea and the Eastern Ghats mountain stretch, shook under the 200 km/h wind speeds of Hudhud cyclone on the 12th of October this year. Within a few hours, the insanity of the cyclone devastated the

region, tearing down the entire tree cover and bringing down huge trees dating back several decades. Nature’s anger spared neither itself nor man-made structures leaving buildings that came crashing down to their bare frames and brought down most of the electric poles, enveloping the district in complete darkness and powerlessness.

The might of the winds that uprooted all the trees and crops left no shelter for the birds or animals, washing them away mercilessly into the whirlwind waters. An unprepared human population had to simply watch, helplessly waiting for the savage fury to subside and then live through weeks without power or water or any basic amenities. While the well-informed government did all it could to prevent the loss of human life and swung into disaster preparedness work by evacuating vulnerable communities from the coast and widely warning people to remain in safety, it could not also stop the devastation that was beyond human intervention. So severe was the destruction that it was impossible for the government to bring back order into the region for several weeks, given the extent of damages on all fronts.

Frantically working around the clock to restore normalcy, the government and the public have gotten together to clear the roads and restore basic services. Yet for an entire week, the city of Visakhapatnam remained in darkness as it was impossible to put back the brutally damaged power transmission systems with electric poles sprawled in every street corner of the city.

Without power, all the other basic services were badly affected as supplying water to the multi-storied housing colonies and the slums that were submerged in the flooded city was impossible. Most people had not prepared themselves for a disaster of this proportion and faced severe problems accessing drinking water and essential commodities. Communication networks were completely destroyed, and physical access in most places around the city was  difficult due to roads being blocked with huge trees and electric poles. Manpower and machinery that came pouring in from different states to help with the restoration work was no match for the extent of damage caused by the cyclone. Amidst this havoc, we, a small community tucked behind the hills of Visakhapatnam, lived through the devastation and survived even when marooned from the rest of the world. Our farm and all its humble structures made from bamboo, grass, tiles, and other local material stood the test of nature’s fury. While they put up a resistance for a most part of the cyclone, they finally gave way with the thatched roof and tiled structures getting blown off by the winds, leaving us hanging on to each other under one leaking roof. Most of the trees – some more than 50 years old – all had to bow down to the might of Hudhud. The ten acres of mango, coconut, tamarind, cashew, and diverse other trees were uprooted and crashed to the ground and so were all our crops. The only single structure that proudly survived intact and remained our life line was the solar system – our recently fulfilled dream of several years to be a self-reliant community.

A five kilowatt power generation system has been helping us slowly withdraw our dependence on the main grid and has enabled us to meet most of our energy needs for our domestic and office uses. The moment the rains stopped and the sun peeped out, or rather plunged out of the sky, blazing the earth which had no tree shade, our solar system got into the act of giving us power. While all around us, the world stood in darkness, we were blessed by the shining sun giving us electricity and protecting us from facing any food or water crisis.  On our farm, we were able to light our houses at night, pump up the ground water to meet all our domestic water needs, and charge our basic communication systems. This ray of light through the eerie nights of darkness around us gave us and our cattle a sense of security and safety. We were spared the ordeal that the city had to face for lack of basic amenities after the cyclone. As we write this piece, we are still totally supported by our solar power as the government machinery has not yet been able to reach our suburban villages to restore the power lines or the communication systems.

Thanks to our own alternate energy system, we were to have sufficient water, good, hot cooked food, and enough water to bathe every day – a luxury that none could afford in the rest of the city for an entire week. It is a learning experience and blessing, both how small, self-reliant, and decentralized systems that create minimum stress on the environment can come to our rescue not only in normal times but in times of serious Hudhuds.