The Psychology of Yoga – Sri Aurobindo

by Sri Aurobindo: Yoga is not a modern invention of the human mind, but our ancient and prehistoric possession. 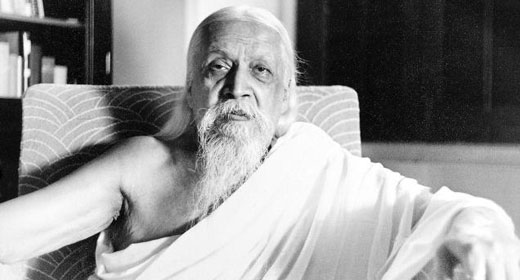 The Veda is our oldest extant human document and the Veda, from one point of view, is a great compilation of practical hints about Yoga. All religion is a flower of which Yoga is the root; all philosophy, poetry and the works of genius use it, consciously or unconsciously, as an instrument.

We believe that God created the world by Yoga and by Yoga He will draw it into Himself again. Yogah prabhavapyayou, Yoga is the birth and passing away of things. When Sri Krishna reveals to Arjuna the greatness of His creation and the manner in which He has built it out of His being by a reconciliation of logical opposites, he says “Pasya me yogam aishwaram”, Behold my divine Yoga. We usually attach a more limited sense to the word; when we use or hear it, we think of the details of Patanjali’s system, of rhythmic breathing, of peculiar ways of sitting, of concentration of mind, of the trance of the adept. But these are merely details of particular systems. The systems are not the thing itself, any more than the water of an irrigation canal is the river Ganges. Yoga may be done without the least thought for the breathing, in any posture or no posture, without any insistence on concentration, in the full waking condition, while walking, working, eating, drinking, talking with others, in any occupation, in sleep, in dream, in states of unconsciousness, semi consciousness, double-consciousness. It is no nostrum or system of fixed practice, but an eternal fact of process based on the very nature of the Universe.

Nevertheless, in practice the name may be limited to certain applications of this general process for specific and definite ends. Yoga stands essentially on the fact that in this world we are everywhere one, yet divided; one yet divided in our being, one with yet divided from our fellow creatures of all kinds, one with yet divided from infinite existence which we call God, Nature or Brahman. Yoga, generally, is the power which the soul in one body has of entering into effective relation with other souls, with parts of itselfwhich are behind the waking consciousness, with forces of Nature and objects in Nature, with the Supreme Intelligence, Power and Bliss which governs the world either for the sake of that union in itself or for the purpose of increasing or modifying our manifest being, knowledge, faculty, force or delight. Any system which organises our inner being and our outer frame for these ends may be called a system of Yoga.

As the Indian mind, emerging from its narrow mediaeval entrenchments, advances westward towards inevitable conquest, it must inevitably carry with it Yoga and Vedanta for its banners wherever it goes. Brahmajnana, Yoga and Dharma are the three essentialities of Hinduism; wherever it travels and find harbourage and resting place,these three must spread. All else may help or hinder. Shankara’s philosophy may compel the homage of the intellectual, Sankhya attract the admiration of the analytical mind, Buddha capture the rationalist in search of a less material synthesis than the modern scientist’s continual Annam Brahma Pranam Brahma, but these are only grandiose intellectualities. The world at large does not live by the pure intellect, although, immaterial in its origin, it bases practicality upon abstractions. A goal of life, a practice of perfection and a rational, yet binding law of conduct, – these are man’s continual quest, and in none of these demands is modern Science able to satisfy humanity.

In reply to all such wants Science can only cry, Society and again Society and always Society. But the nature of man knows that Society is not the whole of life. With the eye of the soul it sees that Society is only a means, not an end, a passing and changing outward phenomenon, not that fixed, clear and eternal inward standard and goal which we seek. Of Society as of all things Yajnavalkya’s universal dictum stands: a man loves and serves Society for the sake of the Self and not for the sake of Society. That is his nature and whatever Rationalism may teach, to his nature he must always return. What Science could not provide, India offers: Brahman for the eternal goal, Yoga for the means of perfection, dharma (swabhavaniyatam karma) for the rational yet binding law of conduct. Therefore, because it has something by which humanity can be satisfied and on which it can found itself, the victory of the Indian mind is assured.

But in order that the victory may not be slow and stumbling in its progress and imperfect in its fulfilment, it is necessary that whatever India has to offer should be stated to the West on language that the West can understand and through a principle of knowledge which it has made its own. Europe will accept nothing which is not scientific, nothing, that is to say which does not take up its stand on an assured, well-ordered and verifiable knowledge. Undoubtedly, for practical purposes the West is right; since only by establishing ourselves on such an assured foundation can we work with the utmost effectiveness and make the most of what we know. For shastra is the true basis of all perfect action and shastra means the full and careful teaching of the principles, relations and processes of every branch of knowledge, action or conduct with which the mind concerns itself.Indian knowledge possesses such a scientific basis, but, in these greater matters, unexpressed or expressed only in broad principles, compact aphorisms, implied logical connections not minutely treated in detail, fully with a patient logical order and development in the way to which the occidental intellect is now accustomed and which it has become its second nature to demand. The aphoristic method has great advantages.

It prevents the mind from getting encrusted in details and fossilizing there; it leaves a wide room and great latitude for originality and the delicate play of individuality in the details. It allows a science to remain elastic and full of ever new potentialities for the discoverer. No doubt, it has disadvantages. It leaves much room for inaccuracy, for individual error, for the violences of the illtrained and the freaks of the inefficient. For this [reason], among other more important reasons, the Indian mind has thought it wise to give a firm and absolute authority to the guru and to insist that the disciple shall by precept and practice make his own all that the master has to teach him and so form and train his mind before it is allowed to play freely with his subject. In Europe the manual replaces the guru; the mind of the learner is not less rigidly bound and dominated but it is by the written rule and detail not by the more adaptable and flexible word of the guru.

Still, the age has its own demands, and it is becoming imperatively necessary that Indian knowledge should reveal in the Western way its scientific foundations. For if we do not do it ourselves, the Europeans will do it for us and do it badly, discrediting the knowledge in the process. The phenomenon of the Theosophical Society is a warning to us of a pressing urgency. It will never do to allow the science of Indian knowledge to be represented to the West through this strange and distorting medium. For this society of European and European-led inquirers arose from an impulse on which the Time-Spirit itself insists; their object, vaguely grasped at by them, was at bottom the systematic coordination, explanation and practice of Oriental religion and Oriental mental and spiritual discipline. Unfortunately, as always happens to a great effort in unfit hands, it stumbled at the outset and went into strange paths.

It fell into the mediaeval snare of Gnostic mysticism, Masonic secrecy and Rosicrucian jargon. The little science it attempted has been rightly stigmatized as pseudo-science. A vain attempt to thrust in modern physical science into the explanation of psychical movements, – to explain  for instance pranayam in the terms of oxygen and hydrogen! – to accept uncritically every experience and every random idea about an experience as it occurred to the mind and set it up as a revealed truth and almost a semi-divine communication, to make a hopeless amalgam and jumble of science, religion and philosophy all expressed in the terms of the imagination – this has been the scientific method of Theosophy. The result is that it lays its hands on truth and muddles it so badly that it comes out to the world as an untruth. And there now abound other misstatements of Indian truth, less elaborate but almost as wild and wide as Theosophy’s. From this growing confusion we must deliver the future of humanity.