Kundalini yoga is a physical, mental and spiritual discipline for developing strength, awareness, character, and consciousness. Practitioners call Kundalini yoga the yoga of awareness because it focuses primarily on practices that expand sensory awareness and intuition in order to raise individual consciousness and merge it with the Infinite consciousness. 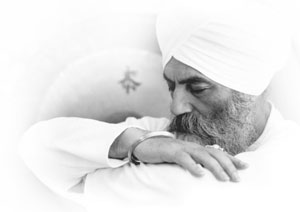 Considered an advanced form of yoga and meditation, its purpose is to cultivate the creative spiritual potential of a human to uphold values, speak truth, and focus on the compassion and consciousness needed to serve and heal others.

Until modern times, Kundalini Yoga was on the whole a secretive and misunderstood technology – it was not known to be widely taught by any master teachers outside of India until Yogi Bhajan brought his revolutionary understanding of the teachings to the United States in 1969.

Perhaps the earliest known written mention of Kundalini Yoga is in the Yoga-Kundalini Upanishad, which is the eighty-sixth among the 108 Muktika Upanishads, associated with the Krishna Yajurveda, originating from India. The origin of this particular writing is difficult to substantiate because scholars disagree about the exact dates of the composition of the Upanishads, but agree that all Upanishads have been passed down through oral tradition. Some have estimated that the composition of the Yajurveda texts date as far back as between 1,400 and 1,000 BC.

In the late 1800s into the early 1900s author John Woodroffe, an Oxford graduate, translated some twenty original Sanskrit texts under the pseudonym Arthur Avalon. His most popular and influential book titled The Serpent Power: The Secrets of Tantric and Shaktic Yoga, became a major contribution of the time to the appreciation of Indian philosophy and spirituality and the source of many early Western occult appropriations of tantra and kundalini practice.

In 1969 Kundalini Yoga was brought into awareness of Western and American spiritual culture by yogic master Yogi Bhajan, a renown spiritual teacher from India. He re-incarnated the previouslyrestricted yoga form and introduced it to the West as comprehensive spiritual system for personal growth.[8] The yoga form was initially set about to teach Kundalini Yoga as an alternative and transformational technology for self-development, and to counter the drug abuse of the 60’s.

Throughout 35 years teaching until his death in 2004, Yogi Bhajan built up a legacy of information and teachings around the yogic lifestyle practice of Kundalini yoga, including the publications of over 100 related books on the applications of the yogic technology in the fields of spirituality – covering yoga, meditation, body-work, drug rehabilitation, women’s and men’s yoga, psychology, healing, re-birthing, teaching, business, relationships, and marriage. He also succeeded in training a network of teachers who continue to share and disseminate this form of Kundalini Yoga all over the world.

In 1935 Sri Swami Sivananda penned a detailed, but esoteric depiction of some historically classic Kundalini Yoga practices in a treatise called Kundalini Yoga.

All yoga forms are believed to be designed to raise kundalini energy, and have their origins in the pillars and Yoga Sutra of Patanjali – a foundational yoga scripture believed to have been compiled around the 2nd century BCE.  Based on this foundation, most yoga forms and meditation derive their structure and discipline from the ashtanga 8-limbed approach, which provide guidelines for the austerities of practice.