by Paramahansa Yogananda: The ancient rishi Patanjali [150BCA or 2nd c BCA] defines yoga as “neutralization of the alternating waves in consciousness.” 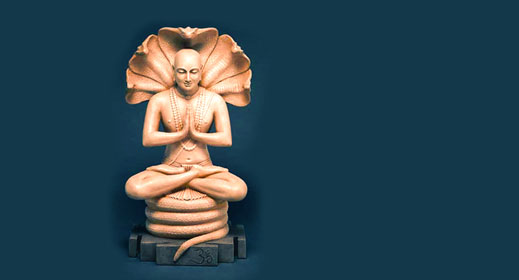 His short and masterly work, Yoga Sutras, forms one of the six systems of Hindu philosophy. In contradistinction to Western philosophies, all six Hindu systems embody not only theoretical teachings but practical ones also. After pursuing every conceivable ontological inquiry, the Hindu systems formulate six definite disciplines aimed at the permanent removal of suffering and the attainment of timeless bliss.

The later Upanishads uphold the Yoga Sutras, among the six systems, as containing the most efficacious methods for achieving direct perception of truth. Through the practical techniques of yoga, man leaves behind forever the barren realms of speculation and cognizes in experience the veritable Essence. (Autobiography of a Yogi)

The Yoga system of Patanjali is known as the Eightfold Path.

1. Yama (moral conduct), – Yama is fulfilled by noninjury to others, truthfulness, nonstealing, continence, and non-covetousness.

2. Niyama (religious observances). The niyama prescripts are purity of body and mind, contentment in all circumstances, self-discipline, self-study (contemplation), and devotion to God and guru.

3. Asana (right posture); the spinal column must be held straight, and the body firm in a comfortable position for meditation;

5. Pratyahara (withdrawal of the senses from external objects).

The last steps are forms of yoga proper:

6. Dharana (concentration), holding the mind to one thought;

This Eightfold Path of Yoga leads to the final goal of Kaivalya (Absoluteness), in which the yogi realizes the Truth beyond all intellectual apprehension. (AoY)

Kriya Yoga is mentioned twice by the ancient sage Patanjali, foremost exponent of yoga, who wrote:

Patanjali speaks of God as the actual Cosmic Sound of Aum that is heard in meditation. Aum is the Creative Word, the whir of the Vibratory Motor, the witness of Divine Presence. Even the beginner in yoga may soon hear the wondrous sound of Aum. Through this blissful spiritual encouragement, he becomes convinced that he is in communion with supernal realms.

Patanjali refers a second time to the Kriya technique or life-force control thus:

“Liberation can be attained by that pranayama which is accomplished by disjoining the course of inspiration and expiration.”
—Yoga Sutras II:49

These yogangas, or limbs of yoga, have come to be known as Patanjali’s Eightfold Path of Yoga. They are enumerated in his Yoga Sutras, II:29: Yama (moral conduct, the avoidance of immoral actions); niyama (religious observances); asana (right posture for bodily and mental control); pranayama (control of prana or life force); pratyahara (interiorization of the mind); dharana (concentration); dhyana (meditation); and samadhi (divine union).

This first step of the Eightfold Path is fulfilled by observing the “thou shalt nots”—abstaining from injury to others, falsehood, stealing, incontinence, and covetousness. Understood in the full sense of their meaning, these proscripts embrace the whole of moral conduct. By their observance, the yogi avoids the primary or fundamental difficulties that could block his progress toward Self-realization. Breaking the rules of moral conduct creates not only present misery, but long-lasting karmic effects that bind the devotee to suffering and mortal limitation.

Yama-niyama are the foundation on which the yogi begins to build his spiritual life. They harmonize body and mind with the divine laws of nature, or creation, producing an inner and outer well-being, happiness, and strength that attract the devotee to deeper spiritual practices and make him receptive to the blessings of his guru-given sadhana (spiritual path).

Asana prescribes the necessary correct posture for yoga meditation. Though many variations have evolved, the essential basics are a steady body with straight, erect spine; chin parallel to the ground; shoulders back, chest out, abdomen in; and eyes focused at the Kutastha center between the eyebrows. The body must be still and unmoving, without strain or tension. When mastered, the correct posture or asana becomes as expressed by Patanjali, “steady and pleasant.” It bestows bodily control and mental and physical calmness, enabling the yogi to meditate for hours, if so desired, without fatigue or restlessness.

It is evident, then, why asana is essential to life-force control: It supports the inner dispassion toward the demands of the body and the ardent power necessary to invoke the aid of the life energies in turning the consciousness inward to the world of Spirit.
Kuntibhoja, Right Posture, provides the physical and mental pacification necessary to fight the body-bound tendencies toward laziness, restlessness, and flesh attachment.

The life force is the link between matter and Spirit. Flowing outward it reveals the spuriously alluring world of the senses; reversed inward it pulls the consciousness to the eternally satisfying bliss of God. The meditating devotee sits between these two worlds, striving to enter the kingdom of God, but kept engaged in battling the senses. With the aid of a scientific technique of pranayama, the yogi is at last victorious in reversing the outward-flowing life energy that externalized his consciousness in the action of breath, heart, and sense-ensnared life currents. He enters the natural inner calm realm of the soul and Spirit.

Samyama is a collective term under which the last three steps of the Eightfold Path are grouped together.

The first five steps are the preliminaries of yoga. Samyama, from sam, “together,” andyama, “holding,” consists of the occult trio, dharana (concentration), dhyana (meditation), and samadhi (divine union), and is yoga proper. When the mind has been withdrawn from sensory disturbances (pratyahara), then dharana and dhyana in conjunction produce the varying stages of samadhi: ecstatic realization and, finally, divine union.

Dharana is concentration or fixity on that inner conception or object of meditation. Thus arises from this contemplation the perception of the Divine Presence, first within oneself, and then evolving into cosmic conception—conceiving of the vastness of Spirit, omnipresent within and beyond all creation. The culmination of samyama self-mastery is when the meditator, the process of meditating, and the object of meditation become one—the full realization of oneness with Spirit.

By reference in the Gita text to Abhimanyu’s metronymic, Saubhadra, we are directed to the meaning of Subhadra, “glorious, splendid.” Thus Abhimanyu is that self-mastery which bestows light or illumination. The metaphorical derivation: Abhi sarvatra manute prakasate iti—”One who shines intensely everywhere,” i.e., who lights or reveals everything; who makes manifest the illumined state of Self-realization. Abhimanyu, Self-Mastery is that great Pandava warrior whose victories enable the yogi to hold back the onslaught of the restless, delusive consciousness of ego, senses, and habits and thus to remain longer and longer in the state of divine soul consciousness—both during and after meditation.

Dhyana, or meditation, is the focusing of the freed attention on Spirit. It involves the meditator, the process or technique of meditation, and the object of meditation.

Dhyana: meditation deepened by the intensity of concentration (dharana) that gives the conception of the vastness of God, His attributes as manifested in His endless expansion of Cosmic Consciousness.

True meditation (dhyana) is spoken of as giving ‘conception of the magnitude of Aum‘.

Samadhi, the state of oneness with God attained during deep meditation, routs the delusion that has made the soul behold, through its ego nature, not the One True Spirit, but the diverse forms of matter and the pairs of opposites. (God Talks With Arjuna p.72)

Spirit is perceived as the only Reality, the sole Eternal Substance, when one’s consciousness enters the deep samadhi experience of divine union with Spirit. (sc)

Patanjali says that attainment of the highest samadhi is possible “by profound devoted meditation on (the Lord) Ishvara (I:23)… His symbol is Aum (I:27).”

Patanjali defines these states in his classification of the various stages of interiorized meditation. In Yoga Sutras I:17-18, he refers to two basic categories of samadhi:

As applied to advanced stages of realization, samprajnata refers to savikalpa (“with difference”) samadhi, or divine union in which there remains some distinction between the knower and the known, as in the realization “Thou and I are One.” In greater or lesser degree, some modifications of nature remain. But in asamprajnuta samadhi, all differentiations of nature are resolved into the one Spirit. The consciousness of “Thou and I are One” becomes “I am He, who has become this little form of ‘I’ and all forms.” This is not the egotist’s proclamation, “I am God!”—the brass crown of megalomania—but rather the full realization of the absolute truth: God is the only Reality. Thus asamprajnata, in its absolute definition, is nirvikalpa (“without difference”) samadhi, the highest yoga or union manifested by fully liberated masters or those on the threshold of soul freedom. (…)