by Scott Snowden: Researchers are racing to make this science-fiction idea a reality… 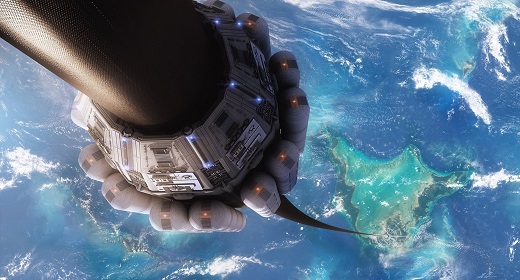 For more than half a century, rockets have been the only way to go to space. But in the not-too-distant future, we may have another option for sending up people and payloads: a colossal elevator extending from Earth’s surface up to an altitude of 22,000 miles, where geosynchronous satellites orbit.

NASA says the basic concept of a space elevator is sound, and researchers around the world are optimistic that one can be built. The Obayashi Corp., a global construction firm based in Tokyo, has said it will build one by 2050, and China wants to build one as soon as 2045. Now an experiment to be conducted soon aboard the International Space Station will help determine the real-world feasibility of a space elevator

“The space elevator is the Holy Grail of space exploration,” says Michio Kaku, a professor of physics at City College of New York and a noted futurist. “Imagine pushing the ‘up’ button of an elevator and taking a ride into the heavens. It could open up space to the average person.”

Kaku isn’t exaggerating. A space elevator would be the single largest engineering project ever undertaken and could cost close to $10 billion to build. But it could reduce the cost of putting things into orbit from roughly $3,500 per pound today to as little as $25 per pound, says Peter Swan, president of International Space Elevator Consortium (ISEC), based in Santa Ana, California.

The idea for a space elevator was first dreamed up in 1895 by Konstantin Tsiolkovsky, a Russian scientist who did pioneering work in rocketry. As commonly conceived today, a space elevator would consist of motorized elevator pods that are powered up and down a ground-to-space tether. The tether would stretch from a spaceport at the equator to a space station in geosynchronous orbit overhead. Centrifugal forces caused by the Earth’s rotation would hold the tether aloft.

The ISS experiment, dubbed Space Tethered Autonomous Robotic Satellite–Mini elevator, or STARS-Me, was devised by physicists from Japan’s Shizuoka University. It will simulate on a small scale the conditions that the components of such a system would encounter. Cameras will examine the movement of a pair of tiny “cubesats” along a 10-meter tether in a weightless environment.

“It’s going to be the world’s first experiment to test elevator movement in space,” a spokesman from the university told Agence France-Presse.

The steel tether to be used in the experiment is too heavy to be used as a full-sized space elevator, which must, of course, extend for tens of thousands of miles. But a growing number of scientists, including Kaku, now believe that an ultra-strong carbon-based material known as graphene could be just the material needed. “On paper, it has the tensile strength to keep the space elevator anchored to the ground,” Kaku says of graphene, which ounce for ounce is 200 times stronger than steel.

Small lengths of graphene are commercially available, but they’re too short to be used to make a space elevator tether. “What we really need is graphene produced in very long lengths of continuous sheet,” says Adrian Nixon, director of Nixor, a firm in Manchester, England, that is working to develop such a product. That can’t be done yet, he says, adding that “it will be possible in the very near future.

Of course, making a suitable tether is just one hurdle that must be overcome. Another is space debris — bits and pieces of rockets and spacecraft that orbit Earth and could damage or destroy a space elevator if they smash into it.

“Avoiding space debris is not like playing dodgeball,” says Michael Fitzgerald, director and chair for architectures at ISEC. “There isn’t a member of our team that doesn’t wonder about the problem,” he adds.

Scientists remain optimistic, however. “With proper knowledge and good operational procedures, the threat of space debris is not a show-stopper by any means,” Swan said. And efforts are now underway to find ways to reduce the amount of space debris, which includes more than 500,000 pieces of junk that are now being tracked by the Defense Department.

Later this year, members of ISEC will meet with U.S. military and trade officials to discuss how space elevator trips could be carefully planned to avoid orbiting debris.