The region has lagged on transitioning away from coal, but natural gas and renewables are gaining ground… 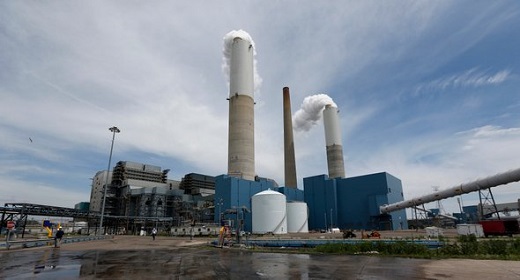 America’s greenhouse gas emissions are declining, in large part thanks to the transformations taking place in communities like this one on the Ontario-Michigan border.

Coal freighters arriving from the Great Lakes have long plied the St. Clair River, which serves as the boundary between the U.S. and Canada here, feeding a pair of coal plants on the American side. The two plants, separated by 3 miles, help form the backbone of DTE Energy Co.’s generating fleet. They power the factories that churn out Fords and Chevrolets in Detroit, some 50 miles to the south.

Now the pair of plants are slated to close by 2031. Their replacement rises in a field between their towering smokestacks: the nearly $1 billion Blue Water Energy Center, a 1.1-gigawatt combined-cycle natural gas plant that DTE officials say will be the most advanced in the state when it comes online in 2022.

The Blue Water plant is the linchpin of DTE’s plan to slash carbon emissions 80 percent of 2005 levels by 2050. It will emit 70 percent less carbon than the coal plants it’s replacing. That’s the “biggest single swing we’ve made to reduce carbon to date,” said Gerard Anderson, CEO of DTE.

He’s outspoken about the need for utilities to address climate change. In a recent interview in his office atop the company’s 25-story headquarters in Detroit, Anderson called climate “one of the defining, if not the defining public policy issue of our time,” and expressed disappointment in the Trump administration for scrapping the Clean Power Plan, which was set to slash emissions from power plants.

U.S. utilities have emerged as the engine behind America’s carbon reduction efforts. Emissions from large power plants are down 19.7 percent since 2011, according to recently released EPA data, as power companies continue to close coal plants in favor of natural gas and renewables (Climatewire, Oct. 18). That has helped lower total U.S. emissions. Greenhouse gas levels nationwide declined 2.7 percent between 2016 and 2017.

But with President Trump dismantling climate programs and liberal states struggling to cut carbon outside the power sector, continued emission reductions in the United States to a great degree depend on Midwestern utilities’ ability to remake their generating portfolios.

Advancements in hydraulic fracturing have unleashed a gusher of cheap natural gas, prompting a wave of coal plant closures across the heartland in recent years. Coal-to-gas switching accounted for roughly two-thirds of emissions reductions between 2005 and 2017, according to the U.S. Energy Information Administration.

The Midwest nevertheless remains disproportionately reliant on coal power by national standards. Illinois, Missouri and Indiana were the second-, third- and fifth-largest coal-consuming states in 2017, EIA figures show, followed by Ohio and Michigan at seventh and ninth, respectively.

Leading coal-burning utilities like Ohio-based American Electric Power Co. and Missouri-based Ameren Corp. have committed to slashing emissions 80 percent by midcentury, but both power companies expect coal to account for at least a third of their power supply in the coming decade.

A growing number of utilities in the region have committed to zeroing out coal. Northern Indiana Public Service Co. generated headlines last month when it announced it would close its coal fleet in the next decade, replacing the power with a combination of renewables and energy efficiency (Climatewire, Sept. 21).

DTE and Consumers Energy, Michigan’s largest and second-largest utilities, respectively, fall somewhere in between. Both have committed to shuttering their coal plants entirely, but their timeline is longer, with each waiting until 2040 to extinguish their final coal boilers.

“I think it’s really important to show this isn’t something just happening in California or the Northeast,” said James Clift, policy director at the Michigan Environmental Council. “This basically demonstrates the Midwest and the old manufacturing portions of the country are able to make this transition, are totally capable of it, and, again, it’s important to show the nation as a whole that we’re moving forward on this front.”

But like many environmentalists here, Clift has questions about the pace of DTE’s transition. The utility plans to close three aging coal plants, including one in East China, by 2023, followed by a fourth larger facility in East China by 2031. That leaves the Monroe power plant, one of America’s largest coal facilities, operating through 2040.

In 2017, Monroe reported carbon emissions of 15.5 million metric tons, fourth most of any coal plant in the country and more than all other DTE coal facilities combined, according to an E&E News review of EPA data.

“At this point we have not seen the commitment match the rhetoric,” Clift said, arguing that state regulators’ recent approval of the Blue Water plant should allow DTE to accelerate the pace of its coal plant retirements and increase its build-out of renewables. “That would be good for their bottom line, ratepayers’ bottom line and address the climate challenge.”

DTE executives are quick to defend their proposal. They note that Monroe has the lowest emissions rate of any plant in their fleet. Michigan, meanwhile, lacks the world-class renewables resources that have allowed utilities like Xcel Energy Inc. to close two large coal units in Colorado and replace their power with renewables. And they argue the company is outpacing the emissions reductions once imagined by the Clean Power Plan, all while maintaining reliability and avoiding an increase in costs for customers.

DTE projects that emissions will fall 45 percent by 2030, compared with the 32 percent called for under the Obama-era plan.

The transition in Michigan’s power sector has been all the more notable for the general lack of government directives from Lansing, the state capital. Energy and climate have been fleeting issues in this year’s gubernatorial contest between former state Sen. Gretchen Whitmer, a Democrat, and Republican Attorney General Bill Schuette, a noted Clean Power Plan opponent.

And while Michigan did enact a law in 2016 boosting the state’s renewable portfolio standard to 15 percent, plans by DTE and Consumers call for adopting renewables at levels far above what is required by the state.

DTE plans to double its renewable portfolio from 1,000 megawatts to 2,000 MW by the early 2020s. By 2040, the utility expects renewables to account for roughly a third of its generating mix, up from about 7 percent today.

Consumers is even further along, having already filed its plan with state regulators. The utility, based in Jackson, Mich., projects that renewables will account for 43 percent of its generating capacity by 2040. Both companies expect to close all their coal plants by 2040.

“To me, the No. 1 driver has absolutely been market costs and economic forces,” said Liesl Clark, president of the Michigan Energy Innovation Business Council. She noted that the rising tide of renewables has been helped by a combination of low wind and solar prices, growing corporate demand for clean energy, and improved integration from grid operators.

Yet there are questions. Although the completion of a 140-mile transmission line through Michigan’s thumb in 2015 eased the integration of new wind projects, siting turbines themselves is increasingly difficult.

“That is the big challenge,” said Valerie Brader, a consultant who previously headed the Michigan Agency for Energy under Gov. Rick Snyder (R). “If you cannot site these projects, it is going to be difficult to keep the economics where they would like to be and get the resource mix to where the utilities would like to see.”

DTE officials said the company will focus on building wind projects in communities that are open to them through the early 2020s, when they will transition to installing larger solar facilities.

But the debate over siting hints at another large shift underway, said Sarah Mills, a researcher at the University of Michigan. Where coal plants were once centered in and around urban centers, today’s renewable projects are generally located in rural areas, where there is more space to accommodate wind turbines and solar panels.

There are advantages to the shift. Agriculture communities have generally been open to siting wind projects. Farmers and local officials tend to favor the royalty payments and tax revenue associated with the towering turbines, said Mills, who has spent the last several years studying the local impact of wind development across the state.

But there’s a catch. In rural communities where tourism is important, there tends to be opposition, Mills said. Homeowners worry the towers will devalue their properties and disrupt their bucolic way of life.

That dynamic was on display on a recent night in Branch County, where DTE has proposed erecting 60-80 turbines in the farm fields straddling the Indiana border. The project has split this stretch of southern Michigan. Agricultural activity anchors the area’s economy, but the region also boasts a collection of inland lakes popular with urban refugees and vacationers.

Mills was called in by the Sherwood Township Planning Commission to give a presentation on the pros and cons of wind development. The board is one of four planning commissions in Branch County weighing a zoning ordinance that will effectively decide whether and how the project proceeds. Roughly 60 people filed into a local middle school gymnasium, fanning out across a set of plastic bleachers to hear Mills speak.

Climate change never came up. Instead, the focus was far more local, on topics like how to structure royalty payments, design setback distances and whether noise from whirring turbine blades presents a health risk. (The answer is no, but they can be annoying.)

“We bought our little hobby farm because it was isolated and quiet,” Pam Reed, who is leading opposition to the project, said in an interview afterward. Reed and her husband moved backed to Michigan last year after spending 25 years in North Carolina, where her husband was stationed in the military.

John Letendre, a member of the Sherwood Township Planning Commission, couldn’t disagree more. Letendre has lived in the area since getting out of the military in 1964, raising Hereford cattle and carrying mail at different points in the years since. In his opinion, the area could badly use the economic stimulus.

“It’s an opportunity for us to be a part of something bigger than ourselves,” he said, pointing to the need to replace power from closing coal plants around the state.

But Letendre is pessimistic about the project’s chances. The commission has been deadlocked for months over how to write the ordinance. He wondered about what it would mean for Michigan if the project failed. His two grown granddaughters urged him to support the development, saying it’s essential to help the state move away from coal.

Letendre pondered the debate from a seat in his truck after the meeting.

“I wish somebody would explain to these people there are only so many places to do this wind,” he said.