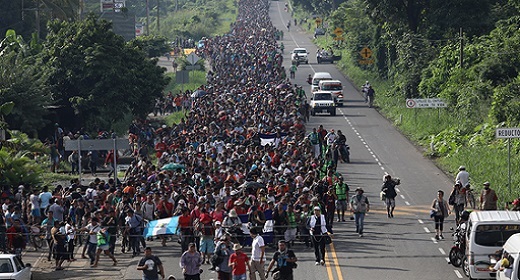 The future is walking north.

The caravan of Central Americans traveling to the southern U.S. border is a preview of what the United States and other rich countries can expect as global warming compounds pressures on fragile and poor states, according to security and immigration experts.

Experts caution against simple explanations for the caravan—political instability, violence and economic scarcity are all factors—but say that climate change promises to make such mass migrations more common in the coming years.

Absent drastic emissions reductions, the World Bank estimates that climate change could displace up to 150 million people within their home country by 2050, and millions more are expected to flee to wealthier countries each year.

With the caravan, the Trump administration is now setting precedents that could follow in future climate-related migrations: deploying the military to the border, floating a new travel ban and threatening to end aid payments to countries the migrants left.

“We do not have any intention right now to shoot at people, but they will be apprehended,” Homeland Security Secretary Kirstjen Nielsen said in an interview with Fox News.

That kind of reaction worries some experts more than the migration itself.

Nationalistic anti-immigrant policies are the “actual security problem,” Femia said, because closing the U.S. border would send destabilizing ripples down to the Central American communities already on edge.

“That’s not a sustainable security strategy… particularly if you’re coupling these immigration policies with a lack of support for climate resilience in these places,” Femia said.

Trump inherited a border that was already militarized. Now he’s framed it as essential for the future of the country—and that might be hard to undo, said Jennifer Johnson, a sociology professor at Kenyon College who specializes in border issues.

In the past, most politicians framed immigration as economic. People argued whether immigrants were taking jobs or powering growth.

Now, Johnson said, Trump has made the debate into a national security question, which blurs the line between military and civilian responses.

That has coincided with another change: the demographics of migrants. Instead of mostly men traveling alone to briefly work before returning home, there are now more families trying to resettle away from a homeland they consider inhospitable, she said.

That reflects a deteriorating situation in their home countries. The United States has historically played a major role in undermining the political and economic systems of Central America, and those problems have gotten worse as climate change looms larger, Johnson said.

“I’m confident that climate change is adding to the stressors,” she said.

There are both chronic and sudden ways global warming drives migration. Changes in rain, disease and temperature patterns can disrupt established farming patterns, causing a cascade of economic and political problems. Floods and storms can also overwhelm an area, forcing people with little money to find work elsewhere.

Most people displaced by climate stressors will move within their country, often to a major city, because that’s where their language and network will make them most employable. But danger and hunger can push people to start over elsewhere.

Eastern Europe, Australia and India have also hardened their borders against people migrating from climate-vulnerable areas.

Germany has been financing climate resilience projects in African countries like Ethiopia and Kenya in hopes of forestalling future migration. But Germany’s rightward drift might bring it in line with other countries that find it easier to simply close their doors, said Robert McLeman, a professor of human responses to environmental changes at Wilfrid Laurier University.

Others will likely follow as the falling prices of drones and sensors make it cheaper to harden borders, he said.

Reprinted from Climatewire with permission from E&E News. E&E provides daily coverage of essential energy and environmental news at www.eenews.net.