by Guru Singh: The 1960’s delivered a liberal movement of conscious awareness — one that opposed war; activated new spirituality over old religions, and 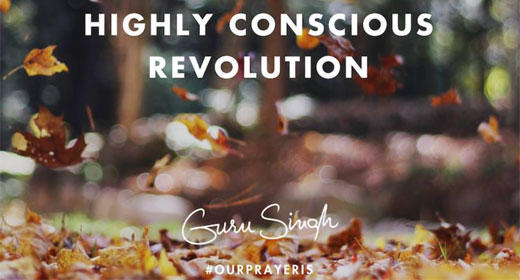 opened social freedoms that transformed life and gave voice to justice. This movement was the result of a very prosperous 1950’s and the birth of a vast middle class amongst industrial nations. The 1960’s moved history, and unlike any time before, it brought angles of truth to oppose the previously untouchable “old-guard” rule.

But this unfettered progress of justice made it clear to the “old-guard’s” entrenched powers — they needed to disassemble the root of this . . . they had to destroy the middle class. Their commitment was: “this must never, ever happen again.” And since that moment, the middle class has been undermined and relocated into a dream amongst old memories . . . a time that was, and even with it’s promised returned, it will never happen without a revolution.

All around the world right now, nations are experiencing a crack-down — the final ‘falsely-privileged’ dying gasps of the historical “old pale-skinned male dominated colonial guard” . . . the very force that’s reeked havoc for centuries. Get used to their violent fascist reactions . . . they’re not going to retire gracefully. But time is shifting around them: DNA is advancing and blending; traditions — unuseable in these new times — are dying out, and the brutal systems of the self-anointed patriarchy are rotting — like a dead fish — from the head.

It’s time for those of you who’ve been sent to Earth as ‘wayfinders’ to step into your role and find the new ways. The first revolutionary battles will be against your inner timidity . . . this must be waged gently, yet unwaveringly. The second battles will be to awaken your sleeping co-conspirators . . . there are millions of them sleeping. The third battlefront — when sufficient numbers wake up — is to wrest (non-violently) the privilege from those claiming privilege. Our prayer is that you’re ready for the revolution; that you’re committed to being a wayfinder, and that you will find a way within your highest consciousness to do just that. #GuruSinghYogi #OurPrayerIs