Can Mushrooms Be The Platform We Build The Future On?

by Adele Peters: Ecovative thinks it can use mycelia, the hair-like network of cells that grows in mushrooms, to help build everything from lab-grown meat to 3D-printed organs to biofabricated leather… 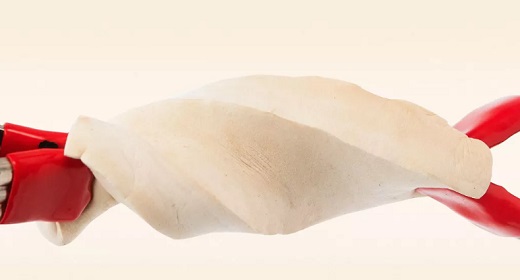 When the first bioreactor-grown “clean meat” shows up in restaurants–perhaps by the end of this year–it’s likely to come in the form of ground meat rather than a fully formed chicken wings or sirloin steak. While it’s possible to grow animal cells in a factory, it’s harder to grow full animal parts. One solution may come from fungi: Mycelia, the hair-like network of cells that grows in mushrooms, can create a scaffold to grow a realistic cut of meat.

“With our platform, we’re able to make these complex structures that have texture that you would cut with a knife and be like, wow, that actually has fibers in it, like meat structure,” says Eben Bayer, founder of Ecovative, a company that recently released a new mycelium-based “biofabrication platform.”

For the company, growing meat without livestock is just one of many applications of the platform. “It’s using nature as a molecular assembler,” Bayer says. Ecovative first launched a decade ago by making packaging, now used by Dell and Ikea, that injects farm waste products with mushroom spawn inside a mold. Days later, the mycelium completes the growth of the product, which can be used as a compostable alternative to Styrofoam. The same process can also be used to grow building materials.

The company’s new MycoFlex platform, which Ecovative announced at SynBioBeta, a synthetic biology conference in San Francisco, can create higher-performing materials. The company is now beginning to license the process to other manufacturers. “Our intellectual property is in understanding the growth and the growth processes that’ll coax mycelium to create these very complex structures, do so repeatedly, and do so at scale,” Bayer says.

The process involves growing trays of mycelia, along with a nutritious substrate, in long walk-in tunnels. By controlling temperature, humidity, carbon dioxide, airflow, and other factors, it’s possible to control the geometry, density, size, and shape of the material.

Bolt Threads used the new platform to create Mylo, a biofabricated leather that uses the network of mycelial fibers to create the look and texture of a hide from a cow. A tote bag made from the new material launched in September. As the clean meat industry emerges, it’s likely that it will also use the platform. People working in regenerative medicine–including startups currently attempting to 3D-print artificial hearts and other body parts–may also use it.

The challenges of growing organs are similar to those involved with growing meat: the structure. It’s very difficult to grow a network of working blood vessels. Some researchers have successfully experimented with plants. It’s possible to strip plant cells from a spinach leaf and then use the veins to carry blood. But “in the case of an apple or a spinach leaf, you’re sort of stuck with the geometry of whatever that natural structure is,” says Bayer. “What makes mycelium an exciting choice for that is we have a lot of control over how these structures form, because while it does form these networks, it does so in a predictable fashion.” In theory, if you were growing lungs, you could create both the right shape and structure.

The platform can also be used for very different consumer products that have sustainability advantages. Ecovative is currently in talks with shoe companies that want to use mycelium foam to replace petroleum-based versions that they use to make the insole, shrinking the carbon footprint of the product and creating something that could be composted in a backyard rather than sent to the landfill when it wears out. Cosmetic companies are interested in using the foam for makeup applicators. Ultimately, Bayer believes mycelium could be widely used in manufacturing. “The cost curve for this platform is pretty exciting at large volumes and gets into the regime where plastic substitution makes sense on an economic and performance basis, ignoring the sustainability side,” he says.