by Ashley Sullivan: For World Animal Day, we celebrate our kinship with and the diversity, beauty and threats to animals large and small… 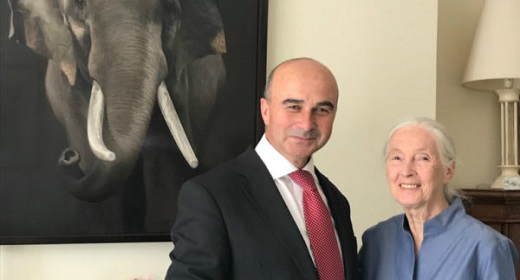 In a recent podcast conversation with Philip Lymbery of Compassion in World Farming, Jane was able to recount the major revelations of her life, her love and compassion for other animals, as well as her and JGI’s commitment to improving animal welfare and current issues with factory farming. Jane and Philip discussed her decision to stop eating meat and the need for UN action on food and farming. The importance of looking at the big picture while acting locally is central to Jane and JGI’s philosophy, and on this day, it is up to each of us to heed Jane’s message to take action on behalf of the rest of the animal kingdom.

Top Jane quotes from ‘The Big Table with Philip Lymbery’

“I think in the womb. I was born loving all animals. In my childhood, I hear from my mother that I took worms to bed with me. But I had a supportive mother, so instead of getting angry because of course there was earth all over my nice bed, she just said ‘Jane they need the earth or they’ll die’. So we took them back into the garden and she supported this love.”

“So, if you think about that, isn’t that the making of a little scientist, the curiosity, asking questions, not getting the right answer, deciding to find out for yourself, making a mistake, not giving up and learning patience. And a different mother might have crushed that early scientific curiosity, so, that moment with the hen was really, really pivotal in my life I think.”

And it really was thought by science back then that the difference between us and other animals was the difference of kind, probably triggered in a way by religion I suspect, some religions. I don’t know, but anyway, it was devastating. But I’d had this teacher when I was a child who taught me that in this respect these erudite professors were definitely wrong and that teacher was my dog, Rusty.”

We also had a session on conditions in some captive situations, secretly filmed footage of the pre-training of circus entertainment chimps. Little infants being beaten and medical research labs. Our closest relatives in 5ft by 5ft cages and I went to that conference as a scientist, I built up a research station, my life was better than anything I could have dreamed of. I had time to be in the rainforest and with the chimps, who by then I knew so, so well. They were almost like, it wasn’t family, I can’t describe it, but very close and I left as an activist. I didn’t make a conscious decision, I just knew I had to do something.”