“I Will Teach You” by Great Grandmaster Tae Yun Kim

by Tae Yun Kim: Only a miracle would free her to live her own life… 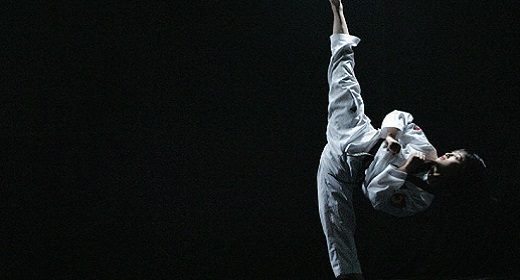 As the following passage opens, the young Tae Yun Kim, a South Korean girl who has been separated from her relatives by the horrors of the Korean war, has returned to her family.
–The Editors

Eventually, I was reunited with my family, and when the war was over I went to live with my grandparents. One blue-gray morning in Kimcheon, South Korea, I was awakened by a shout. Although the war had ended, sudden sounds still had an unsettling effect on me. Cautiously I slid open the rice paper window in the room. My uneasiness disappeared as I saw something that instantly captivated me.

There, in the early morning fog, my uncles were practicing an ancient martial art. I was mesmerized. The mists swirled with their fluid kicks. Their bodies glistened in the first light of dawn as they moved with amazing power and grace. What I saw awakened a deep feeling inside me. Their movements seemed mystical and yet so natural. To my seven-year-old mind, this was beautiful and exciting. It was important. Nothing had ever seemed so perfect. I had to learn how to do that myself. Little did I know how profoundly that moment would affect my life—and how much opposition I would face to fulfilling my desire.

As soon as I could, I asked my uncles to teach me how to do what they were doing, but they met my desire with laughter. “What?” they laughed. “You’re supposed to learn how to cook and sew. And if you’re lucky, someone will find you a husband.” You see, being seven years old was not the obstacle. The obstacle was that I was a girl.

No matter how often my uncles told me that it would be impossible for me to learn martial arts, I would not listen. I insisted that they teach me anyway. Finally one of my uncles came up with a strategy that he thought would work. “Well,” he said, “if we go ahead and give her lessons, she will probably give up.” They were sure that I would stop being so persistent when I saw how difficult it was and started getting bruises from working out.

So every morning, I practiced. Yes, the work was hard and the bruises were many. I had to wear pants to hide the bruises so the other children wouldn’t laugh at me. But to my uncles’ surprise, I did not give up. To their further bewilderment, I progressed. I faced enormous difficulties—not in the art itself but in the continued resistance I met from those who believed that a woman couldn’t and shouldn’t be able to do that. I was, after all, breaking a five-thousand-year-old culture and tradition.

My family, my neighbors, and everyone I met applied enormous psychological and emotional pressure to try and stop me. My family even applied physical pressure, beating me and locking me in my room to keep me from practicing. My mother constantly nagged me and complained, “Why are you such a terrible daughter?” My father would come home drunk every night and beat my mother and me, demanding that I start acting like a marriageable young lady so he could have some peace in life.

My mother was once so desperate to keep me from practicing that she took a pair of scissors and cut off my hair, leaving me with a short, funny-looking hairstyle. She wanted to make me feel so embarrassed that I would not want to leave the house to go practice. I cried, crawled into the corner, and touched my hair in disbelief. Then I thought to myself, “Okay, hair grows back. My hair will grow back. I will have to endure looking like this for a little while, but I am not going to let you stop me from doing what I love. You are not going to cut away my dreams. I will not give that power to you.” In reality, the actions of my mother and family only made me more motivated and committed. The more I heard, “No, no, no,” the more I said to myself, “Yes, yes, yes. I can do it. I will do it.”

When I tell this story, people always ask me whether I was upset with my family for trying to hold me down. Of course I shed a lot of tears and would become frustrated and angry. At some point, though, I realized that my mother was simply doing what she thought was right. She had been taught, as had her mother before her, that the best way to raise a little girl was to teach her to fulfill the role expected of her as a good wife and mother, not to encourage her to dream big. The people who raise us usually do what they think is best for us. If you can understand why they are acting the way they are, you can have greater compassion for them. That doesn’t mean you have to accept their opinions or act like a victim. When you really want something that you believe in passionately, you can’t let anyone rob you of your dreams.

Take a moment now and think about yourself. Have you ever had to stand up for yourself in the face of pressure from those who wanted to force you to live in a certain way? What sort of challenges are you facing now? What dreams are you fighting for?

Photograph by the Republic of Korea

At this point in my life, I had an even worse reputation if that was possible. I was considered bad luck because I was born on the lunar new year as a girl instead of a boy, and now I was doing something that only boys and men were supposed to do. Everyone in my family was convinced that there was surely something wrong with me. While they would have been proud of my accomplishments had I been a boy, they regarded this as one more way that I was bringing shame upon them. In addition, my family was understandably worried that if I kept behaving in such odd ways, nobody would want to marry me and I would grow up to be a lonely, isolated, outcast old woman.

Still, my mind was set. I was determined to break out of the box everyone was trying to keep me trapped in. I knew I had to be true to the burning desire deep within. Although I didn’t realize it at the time, that persistence is what would keep my dream alive through what was coming next.

One day I saw my grandfather talking to a strange woman in broad daylight, something that you would never normally see in our strict culture. All at once I realized what was happening—the woman was a matchmaker and my grandfather was bribing her to find me a husband. That’s not going to happen, I told myself. I knew that I needed to find a way to make sure the matchmaker didn’t like me, because if she did, I was going to be in big trouble.

When my grandfather asked me to serve tea to the two of them so the matchmaker could get a closer look at me, I knew this was my chance to thwart his plan. As I walked toward them holding the hot tea, I suddenly knocked the cup filled with steaming liquid onto the matchmaker’s lap, making it look like an accident.

She was furious. “I don’t care how much  money you give me,” she shouted. “She’s bad luck and I’m never going to find her a husband. She is clumsy, she is no good, she is like a boy!” Other girls would have been dismayed that such an important person as a matchmaker didn’t like them, but I was ecstatic.

As you can imagine, after I had spilled tea on this woman, no other matchmaker would come anywhere near me. My family was at their wit’s end. In their minds, they had done everything in their power to knock some sense into me. Now, they thought, if no one would marry me, they had only one choice left—to turn me over to the Buddhist monks and ask them to accept me as one of them.

That’s how the only person who would come to believe in me entered my life. Following the painful episode with the matchmaker, my grandfather invited a monk to come to our house to talk over this plan with him. As they were talking, the monk kept glancing over at me. I had no idea why he was there, but I knew they must be talking about me. Then the monk motioned for me to come over to him. You may not realize how extremely unusual that was. In my culture at the time, girls were not allowed to even make eye contact with their elders. They always had to look down, and if they ever dared laugh or smile in the presence of a grown-up, they were supposed to cover their mouths. Girls were never allowed to speak directly to their grandfathers or even eat in the same room with them, nevertheless talk to a man who was a monk. That was like having a king ask me to talk with him.

I walked over to the monk, looking down at the ground. In a very gentle, amazingly kind voice, he asked, “So, little girl, don’t you want to get married?”

“But it’s a woman’s place to get married and to be happy having sons and taking care of her family,” he said.

“So what do you want to do when you grow up?”

“I want to become a teacher and help people.”

What a bold statement that was. In the 1950s in Korea, it was unheard of for girls to have such dreams. I might as well have been saying, “I’m going to the moon.”

“A teacher?” the monk asked. “What can you possibly teach?”

“I want to teach martial arts.”

Unlike every other person in my life, he did not scoff at me or dismiss my audacious claim. Instead, in the same gentle tone he said, “Look at me.”

Since girls were not allowed to look a monk in the eye, I thought he must be crazy. But he took his hand, put it under my chin, and lifted my head up. “Um hum,” he said, as he studied my face for what seemed like an eternity. I had no idea what he was thinking. Then he looked directly into my eyes and said the words I had been waiting so long to hear: “Yes, you will become a great teacher.”

I could not believe my ears. Someone was finally acknowledging me and my desires. Then he said something even more amazing: “I will teach you.”

At first I didn’t believe him. But when he again said, “I will teach you,” I knew he was serious. For me, having someone of his stature say he was going to teach me martial arts was like winning a billion dollars in the lottery! It was the first time in my life that anyone had looked at me not as a lowly girl who was always disappointing everyone but as a human being who had value. In that split second, my life changed.