Just a Step Away From Clean Buses Statewide

by Kathryn Phillips: Last week, California came within inches of adopting a rule that will require nearly every public transit bus in the state to be electric by 2040… 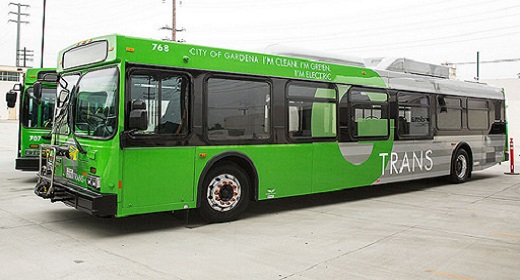 The California Air Resources Board, the agency that regulates vehicle emissions in the state, held a hearing on the Innovative Clean Transit rule, informally known as the zero-emission bus rule. While the board members stopped short of taking a vote on the rule due to procedural hurdles, all signs point to an official vote and adoption by January 2019 at the latest.

This rule has been 18 years in the making. It began as an inkling of an idea in 2000, when the Air Resources Board required transit agencies to cut pollution from diesel buses by either retrofitting diesel buses or buying alternative-fuel buses, including methane gas buses.

The real challenge for clean air advocates began in February 2016, when the Air Resources Board staff received the somewhat reluctant go-ahead from the governing board to start crafting the zero-emission bus rule.

Since then, Sierra Club California staff and our lead chapter volunteer on the issue, Ray Pingle, have coordinated an informal coalition representing health, environmental, and environmental justice groups. The coalition also has included various labor organizations, such as the International Brotherhood of Electrical Workers, Jobs to Move America, and Blue Green Alliance.

About two years ago, when we learned that the staff for the largest transit agency in the state, Los Angeles Metropolitan Transportation Authority, had prepared a report suggesting that electric buses weren’t ready, Ray dove into the document, highlighted the errors, and educated the transit agency staff about the real state of the technology.

Then, Sierra Club staff and allies met with the transit agency’s board members and began a vigorous and successful local campaign, pressing the agency to transition to zero-emission buses by 2030. Parents and kids and workers and health professionals spoke up. And it worked. In the summer of 2017, LA County Metro voted to have all electric transit buses by 2030.

Having the largest transit agency in California declare its move to zero-emission buses sent an important signal to the state air board — as well as to other transit agencies throughout the country. Since then, New York City’s MTA has committed to all-electric transit buses by 2040.

Because several of the Air Resources Board governing board members are elected officials from around the state, it became important to make sure other transit agencies they listened to understood the proposed rule and the state of the technology. Our staff, volunteers, and allies developed and gathered local support, one by one, from key local transit agencies and local political leaders. That helped persuade some of the most sceptical Air Resources Board members that zero-emission buses would work for most agencies.

The efforts, so far, have been well rewarded. Thanks in large part to advocacy by the Sierra Club and allied groups, additional transit agencies in cities around California have set assertive goals to buy zero-emission buses, further smoothing the way for the state rule.

Today, there are 13,000 transit agency buses in California, about half of which are still powered by diesel fuel, with most of the other half  powered by methane gas — both sources of the air pollution that has helped make air in parts of California among the most polluted in the nation.

With the new rule, the emissions of particulate matter and oxides of nitrogen, two critical health-threatening, ground-level air pollutants, will drop to zero from this sector by 2045. The greenhouse gas emissions will drop to almost zero (taking into account the emissions from electricity generated to power the buses).

And transit agencies no longer need to worry about range — the latest electric buses go roughly twice as far on a single charge as the average transit bus travels each day.

Additionally, as the electric technology is tested and improved in buses, it can be transferred to other heavy-duty polluting vehicle sectors, like port-drayage trucks. Those trucks now create pollution hot spots along their routes through the disadvantaged communities located near the state’s largest seaports.

Thanks to the drive for electric buses, California has become a hub for electric bus manufacturing, with six factories or assembly facilities located there, creating hundreds of jobs across the state.

The technology is ready. Now all we need to keep moving forward is that January vote.