The Budding Movement For A Living Economy

by Ben Beachy: A movement is afoot in the shadow of the Trump administration… 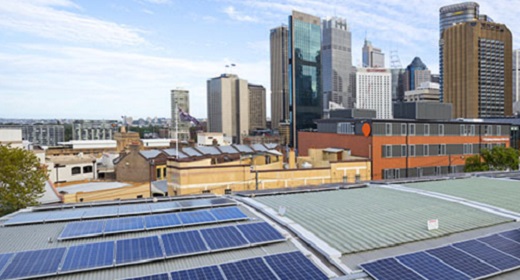 As the administration tries to dismantle protections for workers, frontline communities, and our environment, this growing movement is achieving landmark victories to achieve greater equity, create good jobs, and tackle climate change. As Donald Trump desperately tries to divide us, the movement is building unity.

Take Illinois, for example. One month after Trump was elected, the Illinois Clean Jobs Coalition succeeded in getting the Future Energy Jobs Act signed into law, after two years of organizing and advocacy. The law includes a Solar for All program to massively expand installation of solar panels in the state. The program gives low-income families priority access to solar panels, while providing solar-installation job training, particularly for formerly incarcerated people and communities fighting environmental injustice. The law also sets new energy-efficiency standards that are slated to further reduce air and climate pollution, create over 7,000 new jobs each year to retrofit buildings, and cut $4 billion in energy costs for Illinois families.

The state coalition responsible for this groundbreaking success includes the Sierra Club’s Illinois chapter and environmental justice, labor, faith, and consumer allies. Following their victory, the coalition is now asking Illinois communities what pro-equity, pro-environment, pro-jobs policies should come next. And they’re not alone. From California to Minnesota to New York, similar cross-sector coalitions are pushing for such policy change, with potential victories on the horizon in the coming months. Nationwide, a broad majority of the public — across geographic and racial lines — wants Green New Deal policies that create jobs and accelerate the transition to a clean energy economy.

This growing movement offers an antidote to Donald Trump’s divide-and-conquer strategy, which seeks to paint environmental protections, immigrants, and communities of color as threats to the economic security of working-class families. By working for policies that support economic and environmental well-being, local coalitions are burying the false choice between good jobs and clean air. They’re also undercutting Trump’s racist attempts to pit white, U.S.-born workers against workers of color and immigrants. Such scapegoating strategies lose steam when black, brown, and white workers alike push for policies to deliver better-paying jobs and cleaner air and water.

We now have an opportunity to take this movement national. If we lay the groundwork now, we can build toward post-Trump enactment of a new economic vision — a federal Green New Deal that mirrors the policy victories we’re starting to see at the state level. A nationwide “deal” that wields the economic levers of government not to pad the pockets of CEOs, but to train workers and help communities to build climate-resilient roads, remove lead from drinking water, and expand our clean-energy grid.

How do we get there?  First, we can help fuel growing local movements — from the Midwest to the South to the coasts — to secure more Green New Deal policies in key states over the next couple of years. Second, we can amplify state-level progress in national headlines and in the halls of Congress, boosting the momentum toward federal policy change under a new administration. Third, we can help knit together a national coalition to push for such change — a cross-sector cadre that mirrors the breadth of local coalitions from Pittsburgh, PA to Clarkston, GA.

Each step of this process must be driven by equity. What does that mean? It starts with listening to local leaders and frontline communities. Those who have endured the most environmental and economic damage in the fossil fuel economy are those most qualified to name what must change. That means taking the lead of local racial, economic, and environmental justice groups in determining what exactly a Green New Deal should look like. It means learning from the workers and environmentalists and immigrants and communities of color who are already coming together for local policy change as we try to build similar movement alignment at the national level.

The Sierra Club can help advance this equity-driven march toward national Green New Deal policies. As the Illinois example makes clear, a number of Sierra Club chapters have already been fighting alongside union locals, environmental justice organizations, and other impacted groups to achieve such policies at the state level. This effort also builds on the dedicated work of the Sierra Club’s Healthy Communities Campaign — a project of the Environmental Justice and Labor programs. For years, the Healthy Communities Campaign has worked to secure quality clean energy careers for people of color and low- and moderate-income communities, reduce emissions in frontline communities, and protect the health and livelihoods of communities and working families that have depended on extractive industries for jobs.

Now, the Sierra Club’s trade program is excited to join forces with the Healthy Communities Campaign, Sierra Club chapters, millions of volunteers, and a wide array of national and local partners to bolster this push for a federal Green New Deal.

What’s the connection to trade? For years, our program has fought against corporate trade policies that spur pollution, eliminate jobs, and increase racial and economic inequity. And we’re continuing to do so, as we prepare for a brewing fight over Trump’s reprise of the North American Free Trade Agreement.

Our program is now also fighting for economic policies that have the opposite effect of corporate trade deals: Green New Deal policies that cut pollution and create jobs, with benefits for the same working-class families, immigrants, and communities of color that are hardest hit by unjust trade. In doing so, we are working alongside many of the same labor, environmental justice, consumer, racial justice, and immigrants’ rights groups that we have long partnered with on trade.

To reflect this expanded work, our trade program has a new name: A Living Economy. It sums up our mission: to fuel the growing movement for new economic policies that support the health and livelihoods of frontline communities, not the profits of corporate polluters.

Translating this vision into reality will be a marathon, not a sprint. But thanks to years of local movement-building, we’re already miles beyond the starting line. We look forward to the road ahead.