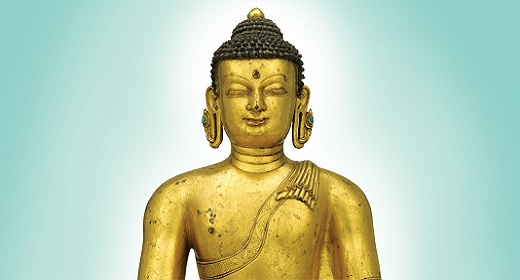 ” The text details the first and one of the most important exhortations given by Buddha to a young Rahula, his son.

It is said that on the night of Rahula’s birth, Gautama Siddhartha shed his title of prince, became a monk and left in search of the ultimate truth. A few years later, after achieving enlightenment, Siddhartha returned to his birthplace as Gautama Buddha, and saw his son Rahula for the first time.

When the Enlightened One visited the palace, Princess Yasodhara introduced Rahula to his father and advised him to ‘ask for his heritage.’ As advised, the young boy approached his father and requested his legacy. Buddha asked his disciple Sariputta to induct Rahula as a Samanera – young monk.

INSTRUCTIONS TO RAHULA AT MANGO STONE

Buddha had settled in Bamboo Grove near Rajagaha, located in present-day Bihar, India. One day, after meditation Buddha visited Mango Stone, where Rahula resided. Upon seeing Buddha, Rahula arranged for a seat and a pitcher of water to wash the master’s feet as a gesture of respect. After paying his respects, Rahula was asked to sit next to his father, where he would receive the master’s instructions.

Buddha first spoke to Rahula on the subject of truthfulness.

The Blessed One pointed at the pitcher. The vessel was almost empty, with just a small amount of water in it. An insufficient quantity to be of any use.

“Just like the insignificance of the water in the pitcher, the monkhood of a person who deliberately lies is of no significance.” Said Buddha.

According to Buddha, a man doesn’t become a monk just because of the title. One of the foremost qualities of a monk is truthfulness. If a monk deliberately lies, his monkhood becomes a mere showpiece, with no real substance or value.

The Blessed One discarded the water in the pitcher and continued, “Ascetics, who are not ashamed of telling lies, abandon the ascetic way of life and everything that’s sacred to them.”

Buddha then turned the pitcher upside-down. “Just like the vessel that has been overturned, the monkhood of a person who isn’t ashamed of lying is overturned and he ceases to be a monk because of his actions” he continued.

He then flipped the pitcher back on its base. “Just like the empty pitcher that’s void, the monkhood or the life of the ascetic who lies is empty and devoid of any merit” he spoke.

Gautama Buddha then presented his son with an example to help clarify his instructions. “In times of conflict, the right place of a king’s elephant is on the battlefield. Once on the battlefield, in the midst of war, if the elephant uses every part of its body to fight except the trunk, then the animal hasn’t performed accordingly, because it hasn’t given ‘it’s everything’. However, if the elephant uses every part of the body to fight, including the trunk, then the elephant has risked everything for its king and country. The trunk is considered the most important part the elephant. It is the most amazing, versatile and powerful tool an elephant possesses. In fact, using just the trunk is akin to using every part of the body for battle, because the elephant that’s ready to risk its most valuable tool is ready to risk everything” he explained. “In the same way, truthfulness is the highest ideal a monk can follow. Some might even consider truthfulness to be the most important discipline, and an essential part of the monastic way of life. The monk who intentionally and shamelessly lies will not hesitate to partake in other vices and evils” he continued. Thus, Buddha advised Rahula to train himself to never lie, under any circumstances.

The Blessed One then went on to instruct Rahula on the subject of mindfulness and the criterion to discriminate good from evil.

“What is a mirror for?” asked Buddha.

“A mirror is used for reflection” replied Rahula.

“A mirror presents the person standing in front of it with a picture of the self. Just like a mirror, we must reflect on our actions, words and thoughts. What is the impact of what we say, do and think on ourselves and others?” Said Buddha.

Buddha wanted Rahula to reflect and think about the consequences of his actions. “Upon reflection, if you find the action you are about to commit can cause harm to yourself or to others, then you must refrain from performing that action” He said. “You must cease and desist from performing any action that has the potential to cause harm, pain, or suffering to yourself or to others” concluded Buddha.

Buddha then asked Rahula to observe and examine his conduct during the performance of an action. “When performing any action, you must scrutinise your behaviour and think about the consequences of that action, for yourself and for others. After self-inspection, if you feel your action may cause pain and suffering to yourself or others then you must immediately stop such an action” said Buddha.

Rahula was then instructed by the Blessed One to reflect upon all actions after finalising them. “Upon reflection, if you find the action you have taken has caused harm to yourself or others, then without wasting time you must confess your wrongdoing to your master or fellow monks, and restrain from such behaviour in the future. On the other hand, if after performing such an action, you find no harm, pain or suffering has resulted to yourself or others, but instead the action resulted in pleasant consequences, then such an action may be repeated” he said.

“The same principle of reflection must be applied to words and thoughts” he continued.

“Applying constant reflection and by examining the consequences, we can understand which actions, words, and thoughts are negative and evil. Deeds, words and mental actions that have no negative outcome are benevolent and must be repeated” said Buddha. The master wanted his son to remain mindful at all times. Before, during and after, thinking, speaking and acting.