by Sam Langley: So……you want to learn a martial art but you don’t fancy rolling around on the floor with some guys groin in your face? 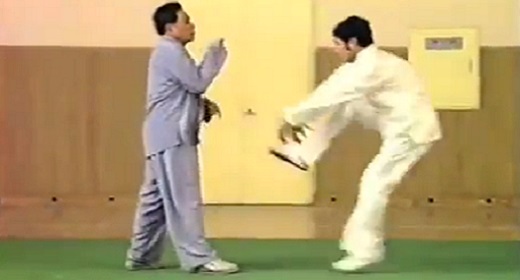 This was going through my mind when I first considered learning Tai Chi.

At the age of 30, I had the suspicion that some systems could be damaging to my body.  I wanted to be stronger and healthier and better able to defend myself but without injury if possible.
I had become increasingly interested in meditation and Tai Chi seemed to be exactly what I was looking for.   Although I’d read about it, I didn’t understand how moving about slowly could possibly give you self defence skills. After a senior student sent me flying backwards with the tiniest movement, however, it became clear that there was something very powerful going on.

Taijiquan is a martial art. It is extremely sophisticated and as such, not easy to grasp. You can only begin to understand how it works after many years of personal practice. This is why it can be hard for some to believe that it works. It takes a long time to cultivate and because of this, Tai Chi is best suited to those of a philosophical nature. A degree of patience and humility is required. If you want quick results you’d be better off learning boxing or wing chun.

Our primary concern is developing power and structure which are achieved largely by standing still and moving slowly, two things that are also incredibly beneficial to your health. The idea that Taijiquan is necessarily slow and soft, however, is actually not true. Many of the forms in Chen style Tai Chi are performed at great speed and with frequent bursts of explosive power.

The type of people that gravitate towards Tai Chi are not the same as those that take up, say, Muay Thai or Jujitsu. A very small percentage of new students are interested in or even aware of Tai Chi’s martial aspect. In my experience most people’s interest in the fighting side grows the longer they stick around. If we take it for granted that Tai Chi is excellent for your health then one’s interest moves elsewhere, why do we perform these exercises? To what end? What’s it all for?

Well, Tai chi is a battlefield martial art. All of the exercises serve the purpose of building martial skills for fighting. Tai Chi is famous for its health benefits but the truly remarkable thing about it is that training the martial and the health aspects are really the same thing! Learning to relax deeply and build strong internal connections creates a resilient body and a calm mind capable of self defence. Defining self defence more broadly means that we are not just defending ourselves from attackers but also from disease, injury and the ravages of old age.

Tai Chi is a supremely effective martial art but because it’s so sophisticated it takes much time and practice to develop. It’s not that it’s complex but more that it’s subtle. To try and sum it up I would say it’s about developing body unity or whole body power. We don’t tend to rely on techniques. Techniques can only be applied if you have power. If you are attacked by someone bigger and stronger than you, no amount of technique will save you. What you need is awareness, speed and power. This is what Tai Chi gives you. As your own body awareness grows so eventually does your awareness of others and also the world around you. You are less likely to be mugged because you can see the potentiality and avoid the situation before it manifests. This is the most valuable form of self defence – don’t be there! Violence is usually very avoidable but if it’s required one cannot back down. What you need in that situation is a lot of power and speed.

If you’re relaxed and can utilise whole body power you stand a chance. Although Tai Chi takes time to gain skills it may be a safer option. Once your body awareness grows you may initially sense that you’re not as agile as you had previously thought. Your own abilities and the abilities of those around you become questionable. This means that after a long period of uncertainty ( when you are unlikely to try and use your art ) you eventually develop some power and by that point are much calmer and better able to sense and avoid trouble.

To be deluded about one’s skill level is dangerous. This is why it’s always best to avoid conflict. It’s also why technique based arts can give people the sense that they’re more capable than they really are.
The reality is though that most of us are very unlikely to need to use our self defence skills.
So for those of us who pursue the martial path, why do we do it?

Speaking for myself it’s because I love the art. If you practice Tai Chi, you are practicing a martial art, there are no two ways about it, that’s what it is. It doesn’t mean you like violence and in fact is the best way to become aware of your own violent potential and deal with it safely. The people I know that are skilled in Tai Chi are some of the least likely to ever need to use it. The stronger one gets the greater one’s awareness of how much you could really hurt someone and so we avoid confrontation. There is a Tai Chi saying ‘ Walk a thousand miles to avoid a fight but if one starts don’t back down an inch’.

This is an important thing to understand for although we hope to be very calm and peaceful we have to protect ourselves and others if need be. Sometimes when I tell a new student that Tai Chi is a martial art they look at me in horror. Surely not! Isn’t it about becoming one with the universe and moving balls of energy around? This is, in my opinion, an unbalanced reaction.

We all have aggression residing in us somewhere, no matter how much we pretend we don’t.
Better to admit it, and do something about it, only then can we be harmonious.