The Practice Of Mastering Time

by Dr. Alberto Villoldo: The Practice of Mastering Time is the first lesson in The Way of the Sage… 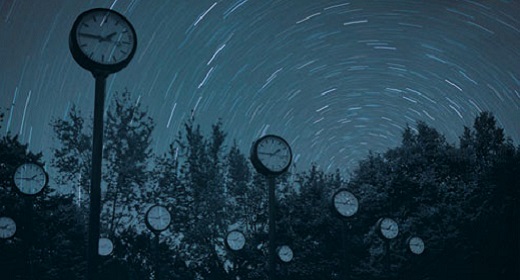 In the West, we’ve been taught that time flows in one direction only, that the future is always ahead of us and the past is always behind us. This is monochronic time, which flows linearly, going at its petty pace from day to day. But time doesn’t just fly like an arrow; it also turns like a wheel. That’s why nonlinear time, or polychronic time, is considered sacred. Here the future seeps into the present to summon us, and we can change events that have already occurred.

The main operating principle of linear time is causality, or cause and effect, which is the basis of modern science: This happens and therefore that happens. Causality means that the past is always spilling into and informing the present. We believe that we’re a mess today because our parents weren’t nurturing enough when we were kids or because we come from a long line of dysfunctional people. But when we perceive time as turning like a wheel, the main

The Laika believe that the chance occurrence of events, such as two people running into each other serendipitously, is just as significant as their cause, or why those two people were in the same place at the same time. Synchronicity allows for future causation and is more interested in the purpose and meaning of an event than in its cause.

I’m reminded of how poet Robert Bly tells the story of Manolete, one of Spain’s most renowned bullfighters. As a boy, Manolete was thin and frail, a fearful child who clung to his mother’s apron strings and was terrified of the bullies at his school. Psychologists have explained his calling to fight bulls as a compensatory mechanism―that is, he was trying to prove to himself and others that he was indeed a brave man. But Bly argues that Manolete could have had a foreboding that he would be facing 2,000-pound locomotives in the ring one day, which would have given him every reason to be afraid as a child.

The Laika know that the cause of a present event may actually lie in the future. If we perceive time in this way, our stress is reduced tremendously because we trust that both good and bad luck are part of a larger plan.

There’s an old Zen story that illustrates this point. A farmer had a horse, but one day it ran away, so the farmer and his son had to plow the fields by hand. Their neighbors said, “Oh, what bad luck that your horse ran away.” The farmer simply replied, “Bad luck, good luck―who knows?”

The next week the horse returned to the farm, bringing a herd of wild horses with him. “What great luck!” exclaimed the neighbors, but the farmer responded, “Good luck, bad luck―who knows?” Then the farmer’s son was thrown as he tried to ride one of the wild horses, and he broke his leg. “Ah, such rotten luck,” sympathized the neighbors. Again, the farmer responded, “Bad luck, good luck―who knows?”

A few weeks later, the king recruited all the young men into his army to prepare for battle. The son, with his broken leg, was left at home. “What good luck that your son was not forced to go to war!” exclaimed the neighbors. And the farmer remarked, “Good luck, bad luck―who knows?”

Mastery of time doesn’t mean we’re unable to keep our commitments to show up on time for others; rather, we’re in such perfect aynithat we always appear at the right moment. By mastering time, we give the universe the opportunity to do what it does naturally, which is to conspire on our behalf. We let go of the belief that we must manipulate the world around us and “take charge” in order for life to work out.

Stepping out of linear time allows us to enter the timeless domain from which the universe is dreaming itself. Within this sacred time, we can find the most desirable destiny for ourselves and choose it. And once we’ve done so, we can easily change the path we’re on.