All About Kundalini Yoga: The Golden Chain, Gurus, And Yogi Bhajan

by Dr. Ramdesh: “The spiritual teacher is the link of Infinity within two finites.  Truth is infinite.  It cannot be captured in any mental or emotional imagination.  Teaching is infinity.” ~Yogi Bhajan 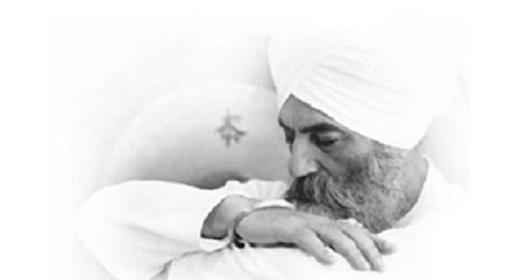 What is the Golden Chain?

The Golden Chain is a way of describing the energetic link that exists between a teacher, their teacher, their teacher’s teacher and so on back into history.  When a Kundalini yoga teacher teaches, the first thing they do is connect with the Golden Chain and invite their wisdom in to teach through them.  It is important to learn in Teacher Training the essentials of Kriya and meditation, the techniques and processes of Kundalini yoga, but it is also important to realize that the essence of a true teacher is to clean out the ego so that intuition and love can serve.  We humble ourselves to the Golden Chain and by doing so, are able to become much truer teachers for our students.   You can learn technique from here to Tuesday, but if you do not humble your ego in the act of teaching, if you make it about YOU and not about the energy current of transformation and the experience of the student, then you really haven’t learned anything yet.  Yogi Bhajan called the Golden Chain, “the law of the soul connected and projected with the mind.”

How to Tune into the Golden Chain

With the Adi Mantra, of course!  This is how we begin any Kundalini yoga practice…by tuning into the Golden Chain with the mantra “Ong Namo Guru Dev Namo” chanted a minimum of 3 times.  This mantra links us with a state of consciousness and helps us merge with Infinite Consciousness by linking to the Guru, the Divine Teacher.

What is a guru?

A guru is a spiritual teacher, but more than that, a guru is a catalyst of transformation.  The Guru is an energy that wakes us up…and it is alive inside of everyone.  When we tune into that wisdom inside of us, we connect with limitless intelligence.  Tuning into the Adi Mantra is a tool to tune us into the guru dev…the divine spark within. The purpose of having a guru outside of yourself is to assist you in realizing the guru inside of yourself.   As Yogi Bhajan said, “The guru is a storehouse of the technical knowledge of how to be a human being and master life.”

Many Paths, Many Masters

On this Yogi Bhajan was clear:  there are many paths to liberation, and only one: to live truthfully.  There are many Masters, and yes only One: Truth.  He said that you do not choose the path.  The path chooses you.  If you have been chosen by the path of Kundalini yoga and the Golden Chain, let it into your heart and life and experience the delicious freedom of walking with these teachings beside you.

Harbhajan Singh Puri was born August 26, 1929 in a village in what is now Pakistan but was then India.  He was the son of wealthy landowners. As a young man, he studied Kundalini yoga, Tantric Yoga and Gong Meditation under Sant Hazara Singh.  At the age of 16, he became a Master of Kundalini Yoga.  He then undertook further yogic training from Acharya Narinder Dev of Yoga Smriti who taught him Hatha Yoga and the importance of the nervous system.  He also studied at the Sivananda Ashram in Rishikesh and learned Vedanta.  From his family, he was instilled with a strong understanding of the Sikh Gurus, values and history, which he solidified through seva at the Golden Temple in Amritsar washing the floors.  In 1968 he went first to Canada to teach yoga and then to Los Angeles, where he began openly teaching Kundalini yoga to the West.  In 1971, Yogi Bhajan became the Mahan Tantric, after the energy passed from Santa Hazara Singh to Lama Lilan Po and then to him.  The Mahan Tantric facilitates White Tantric Yoga, where tremendous amounts of subconscious negativity are released.  In 1970 he also took on the title of Siri Singh Sahib, becoming the leader of Sikh Dharma in the Western Hemisphere.  Throughout his life, he established 3HO, taught tirelessly and created a team of teachers who could continue to teach after him, and gave a powerful message of peace with the help of Guru Ram Das.  On October 6, 2004, at the age of 74, he left his physical body.  All Kundalini yoga teachers carry on his legacy of teachings.

The Teachings of Yogi Bhajan

Connect with Yogi Bhajan by watching him on DVD or listening to him on CD.  Take it seriously and pretend you are truly in class with him.  Sit up straight and give him the respect of your full attention.  Believe that he is talking to you and participate in the meditations under his guidance.  Keep photos of him around your house for inspiration and talk to him throughout the day.  If you are considering become a teacher of Kundalini yoga and taking the Teacher Training program, tune in and connect to his subtle body and ask him for support and guidance.  He will come to you.