Connect Your Subconscious & Your Intuition With The Two-Stroke Breath

by Allison Ritter:  The Ajna Chakra, the Sixth Chakra, is also called the Third Eye and is the seat of intuition… 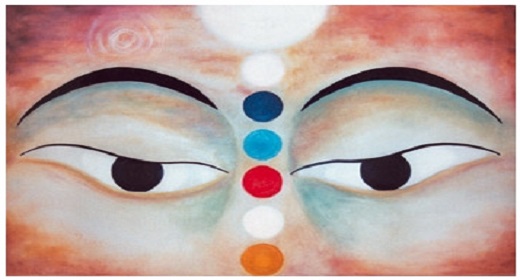 Ajna means “to command” so the Ajna Chakra is the command chakra. Kundalini Yoga strengthens a person’s intuition by developing the Third Eye allowing a person to command his or her own life and go in the direction that he or she wants to go. The Ajna Chakra is where the the major channels of energy, the ida, the pingala, and the sushmuna, all come together. The Sixth Chakra is a power center that awakens the Third Eye, giving a person the ability to see with more depth in perception and scope in the subtle words. The Ajna Chakra is represented by light and when developed, gives a person mastery over the duality of the mind. Pranayam (breathing exercises) moves energy throughout the body, opening up any clogged chakraor energy center, and gives a person newfound strength to live his or her destiny.

Two-Stroke Breath to Connect the Subconscious and the Intuition

This kriya us from the yoga manual Praana, Praanee, Praanayam compiled by Harijot Kaur Khalsa.

Sit in Easy Pose with a straight spine. Bend your arms at the elbows so that your fingertips point upward. Place the hands, forearms, and elbows so that they all make one vertical line from elbow to fingertips. Keep them in line with your chest. Rest your upper arms against your side ribs. Place your hands in Gyan Mudra with the palms facing forward. “In ladies there is a chest line, which is an arc line (with which to align the mudra), but men don’t have that. Just sit very straight with fingers very straight and with a precise touch. The forearm must be perpendicular (to the floor) and in line with the body. That’s the tragedy in Kundalini Yoga: posture is the most important thing. They are easy postures, they are not difficult postures. Eyes are nine-tenths closed and one-tenth open. The breath is called Trinity Breath: slightly pucker your lips and inhale powerfully in two-strokes through the mouth (1 second per stroke = 2 second inhalation) and exhale powerfully in one stroke through the nose (1 second). Continue for 15 Minutes.

Comments: “It’s a difficult exercise, but use your diaphragm and breathe those two strokes really powerfully to open up the clogged center. Use your breath to help your pituitary. The pituitary, which is at the end of the nose, has to adjust. Give it a chance. It’s not the time, it is just doing it. It is not the practice, it is perfecting it. This can give you a strength which you never had before.” To Finish: Inhale deeply, put your hands together at the center of the chest in Prayer Mudra with the forearms parallel to the ground, hold your breath for 15-20 seconds as you press your hands together with all your strength. Press so powerfully that your hands shake. Exhale. Inhale, hold the breath for 15-20 seconds and repeat this pressure on the hands. Exhale. Inhale, hold the breath 15-20 seconds with both hands raised up over your head and stretch your spine strongly upward. Exhale and relax.