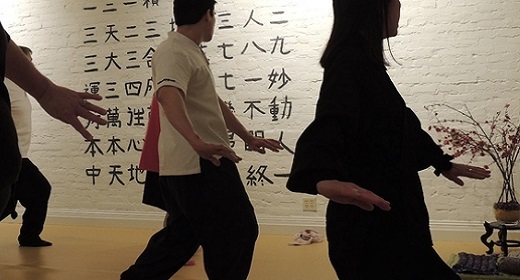 Tai Chi: The Serpent and the Crane

Tai chi is an ancient form of movement intended to unite body and mind. It is said to have originated when a thirteenth-century Taoist monk in China watched a serpent and a crane in battle. As the crane attacked the snake, the snake would smoothly move its position, never allowing the crane to touch it. This scene inspired the monk to develop thirteen moves, which have been refined through the centuries. The graceful and fluid movements flow into each other and have names like “Fair Lady Works at Shuttle” and “Stork Spreads Wings.” Tai chi is practiced by millions of people in China, where it is often performed in the morning and in large groups. It is also popular throughout the rest of the world, and in recent years it has enjoyed an upswing in popularity in the United States. Many older people, in particular, find it of value because of its gentle, nonjarring movements.

Like other mindful exercises, tai chi aims to disperse energy blockages so that the regular flow of chi can be restored and brought back into balance. This is why it is sometimes a companion treatment to acupuncture. Tai chi masters claim that it also brings the opposing forces of yin and yang into equilibrium. Yang and yin represents polar opposite forces, such as earth and sky, active and passive, and male and female. Physically, all tai chi movements require use of opposites, such as left and right or extend and retreat.

Anyone can benefit from tai chi, regardless of age or fitness level. Because it requires regular, deep abdominal breathing, tai chi sharpens mental acuity and concentration. Tai chi improves balance because it relies on movements that alternate from side to side, and it provides a low-intensity aerobic workout. Tai chi lowers blood pressure and slows the heart rate; in fact, it may be even more effective than aerobic exercise in this regard. Also, tai chi opens the joints (especially the knees), strengthens the spine and lower back, and massages the internal organs.

Students of tai chi enjoy many other benefits:

If you’ve ever watched tai chi, you know how entrancing it can be, and you won’t be surprised to hear that some people refer to it as “moving meditation.” Each tai chi sequence is a set of incremental motions linked together, and performing a single sequence may take as long as twenty minutes. These movements are said to promote the flow of chi and harmonize body and mind. Many people report that as their mastery of these movements increases, they see a spillover effect in their everyday lives. They are better able to slow down, think clearly, and respond gracefully to everyday trials. Tai chi can also promote greater poise and concentration in regular physical movement. All in all, it’s an excellent exercise for maintaining overall well-being and fostering serenity.

What to Expect in a Tai Chi Class

If you’re interested in trying tai chi, you can find classes offered at some health clubs as well as some martial arts schools (though tai chi is generally not used as a form of self-defense). Ideally, you should study with a tai chi teacher rather than learn from books or videos, although there are some excellent ones available. The movements can be challenging at first, and a good teacher will be sure to help you assume them correctly. You should wear flat shoes or socks and loose clothes.

The class, which usually lasts an hour, begins with the basic tai chi posture, in which you stand with your back straight, knees slightly bent, head slightly upturned, feet parallel and shoulder-width apart. Your arms should hang freely, and your shoulders should be slightly rounded. The tantien area, which is just below the navel, is where all movements should originate. In traditional Chinese medicine the tantien is the central home of the body’s chi, and as you focus on it throughout the movements, your body awareness grows. When you master a basic tai chi movement, it can be completed in around ten minutes. While some people are quick to learn the basics, true mastery of tai chi can take a lifetime, even with the recommended daily practice.